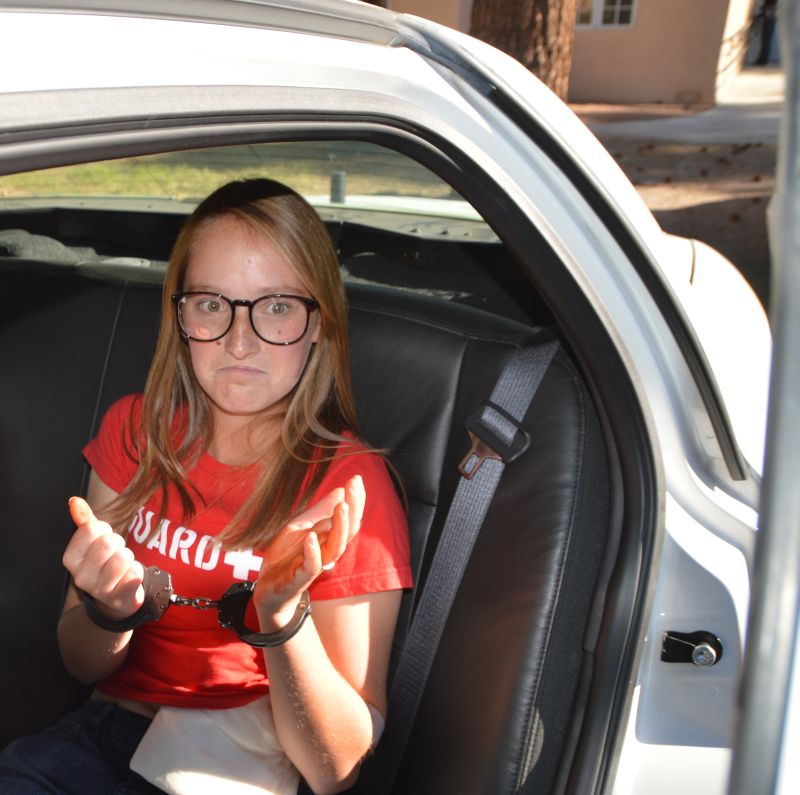 During this morning’s emergency response exercise at Los Alamos High School, police captured the crazed student shooter and placed her in the back of a patrol car for transport to jail. She explained her reason for killing six students and injuring 29 others during her shooting spree was that she had a “really lousy time” at the recent homecoming dance. Photo by Carol A. Clark/ladailypost.com 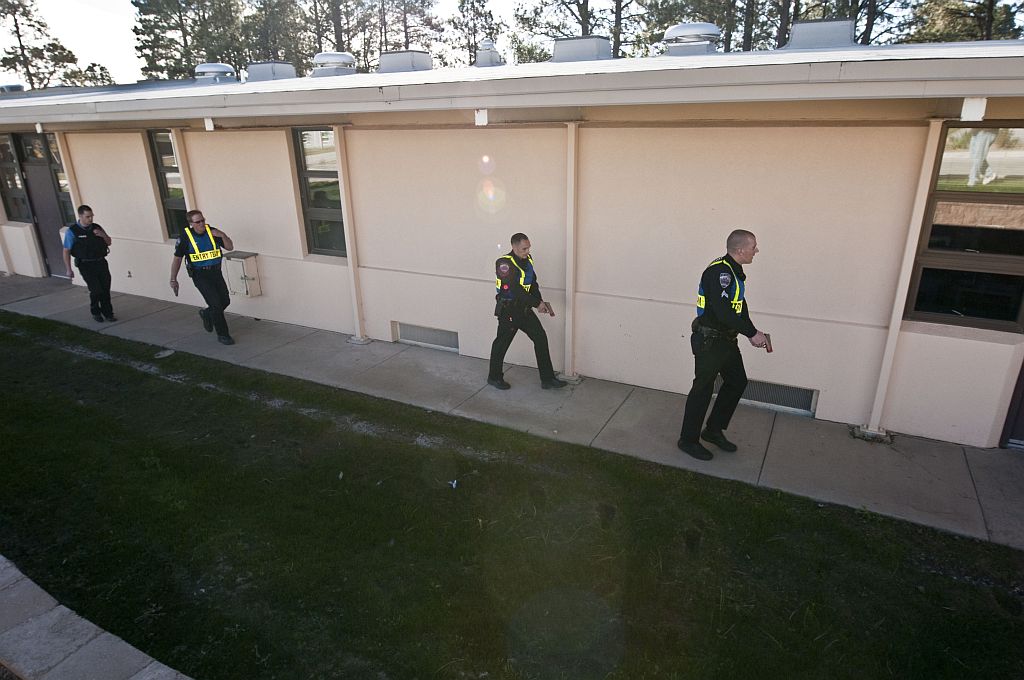 Los Alamos Police Officers arrive at the scene of this morning’s simulated mass shooting at Los Alamos High School and prepare to enter the building where a female student is on a rampage shooting classmates. Photo by Greg Kendall/ladailypost.com

“Operation Hilltopper” conducted this morning at Los Alamos High School is the first full scale County only emergency response exercise to take place in many years. Los Alamos Fire Department Battalion Chief Richard Garcia served as a controller/evaluator of this morning’s exercise and praised the police for “hitting every benchmark” and said “police at the incident command center had control at all times.” Garcia also commended the performance of the fire department, schools, medical personnel and the students who took part in the event.

County Emergency Management Office Coordinator Philmont Taylor told the Los Alamos Daily Post that he received a grant of more than $12,000 from the state that allowed today’s exercise to take place.

“Everyone did such a good job and this is so important for our community to help us be prepared in the event that something of this nature would ever happen,” Taylor said. “I’d really like to see us conduct a full scale County only exercise every two years … not just for a school incident but also to prepare for other potential disasters.”

Los Alamos Police Chief Wayne Torpy and Fire Chief Troy Hughes spoke at the debriefing. Hughes commended his predecessors Doug Tucker and Doug MacDonald together with Torpy for establishing strong ties between the two departments that allow them to collaborate so well.

New Mexico State Police from Espanola and Santa Fe and Santa Fe Police and Sheriffs participated in today’s exercise; however, Torpy said that a real world incident would typically conclude in less than an hour, which means Los Alamos County would have to rely on its own resources.

As would likely happen in a real incident, misinformation runs rampant. Word that there was a male shooter dressed in black today turned out to be false but gave the extra experience to the responders on the hunt for that individual.

During the debriefing several participants commented on how real the exercise felt.

“I was standing near Smith Auditorium and I knew this was just an exercise but when I heard a girl scream – it felt really real,” LAPS Chief Financial Officer John Wolfe said.

A student described his experience saying, “It got really eerie – it became a little too real.”

Some of the students expressed surprise at how the police moved quickly through the scene filled with the dead and injured. An officer with state police explained that law enforcement’s number one objective is to secure the threat to ensure no one else gets hurt. Firefighters come behind police to administer first aid. Because firefighters don’t carry weapons, it is the officer’s responsibility to protect them as well, he said.

Sgt. Oliver Morris said when it comes time to help the wounded they call out, “Come to my voice” and lead those individuals out first. Next they look for the injured who can be carried out. Last to be attended to are the dead or nearly dead.

Students and faculty were told that they are the first line of defense in the case of a school shooter and they have three choices:

Torpy said he would hope that one of the first two choices would happen but that as a last resort people needed to do what was necessary to escape harm.

He also asked anyone to contact authorities immediately who hears of someone making threats or talking about doing something detrimental whether in person or on Facebook such as shooting up the school. 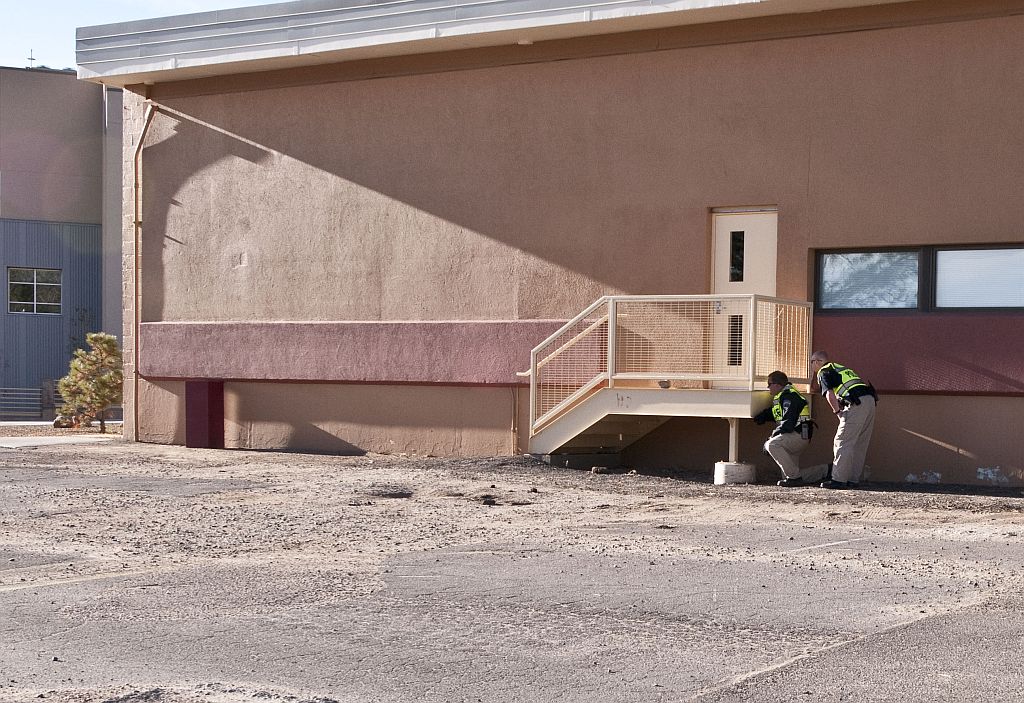 As part of the exercise, Los Alamos Police Officers search for the shooter at Los Alamos High School this morning. Photos by Greg Kendall/ladailypost.com 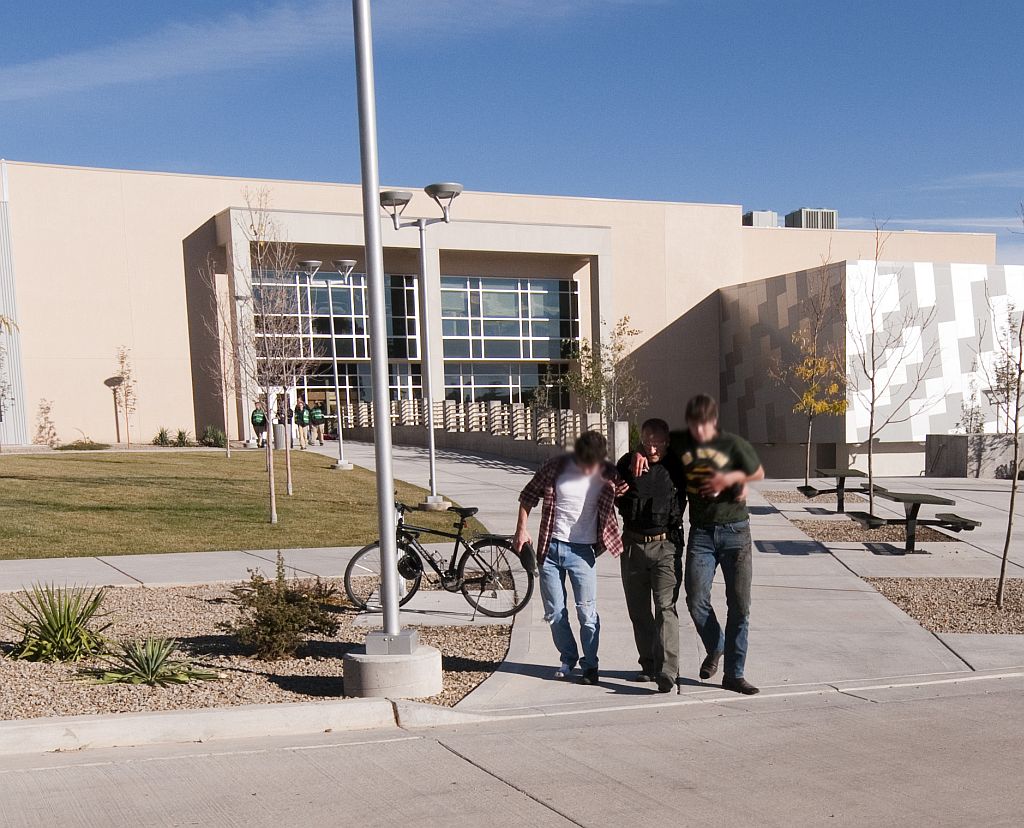 Wounded students are helped to safety as part of this morning’s mass shooting simulation at Los Alamos High School. Photos by Greg Kendall/ladailypost.com 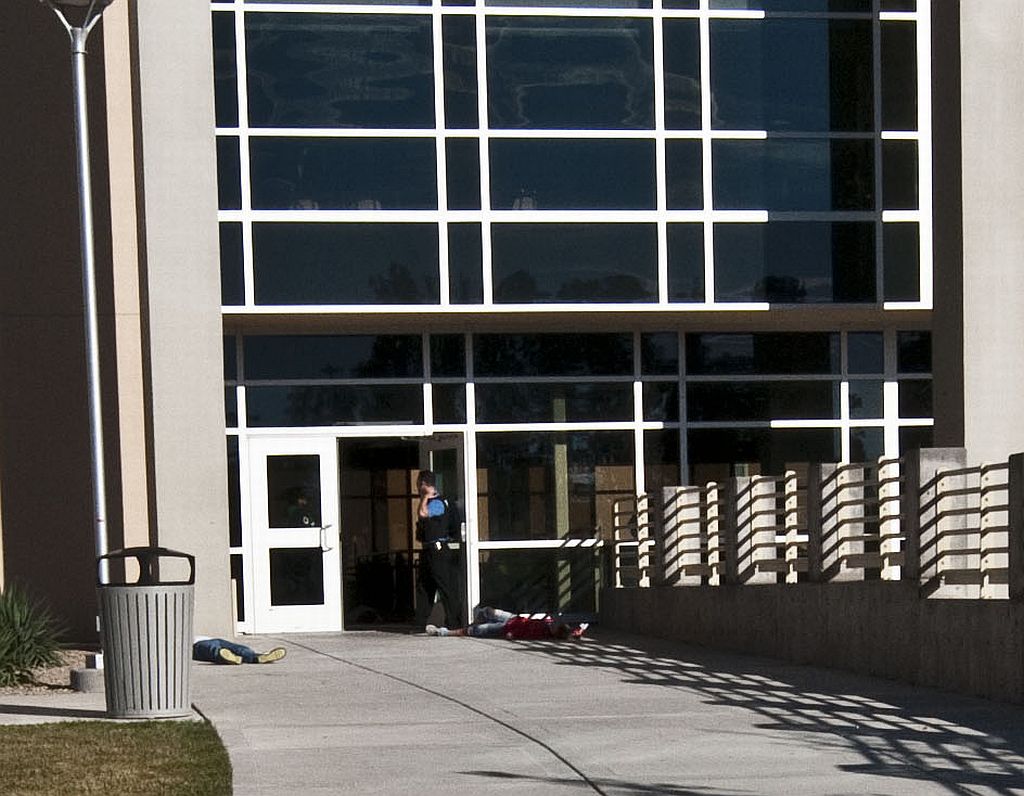 Students play dead at the scene of this morning’s simulation of a mass shooting at Los Alamos High School. Photo by Greg Kendall/ladailypost.com 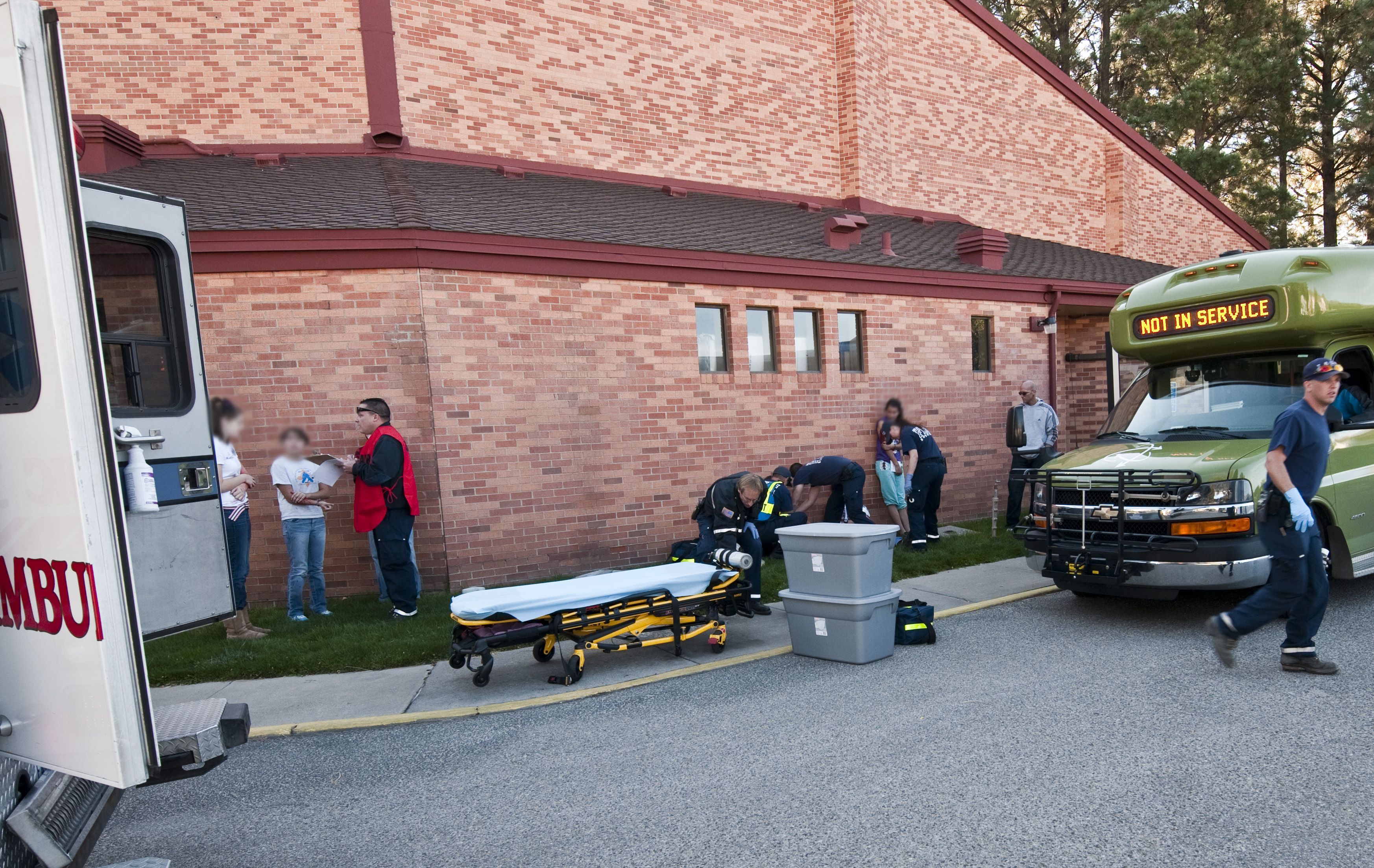 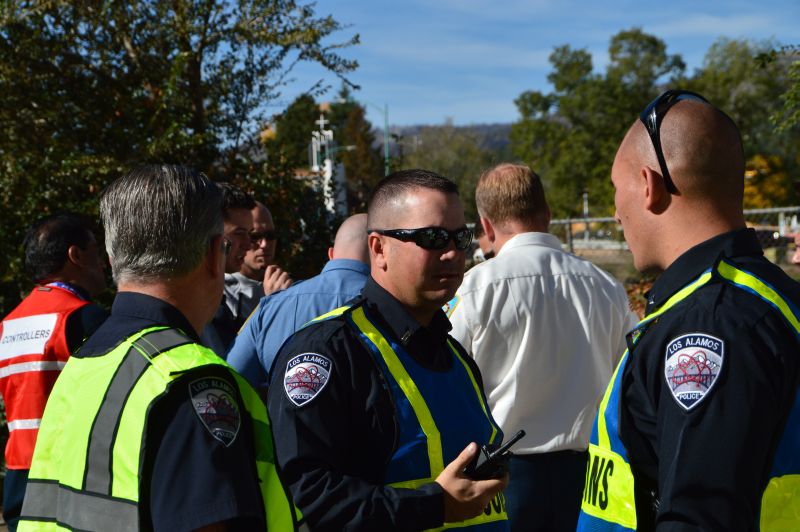 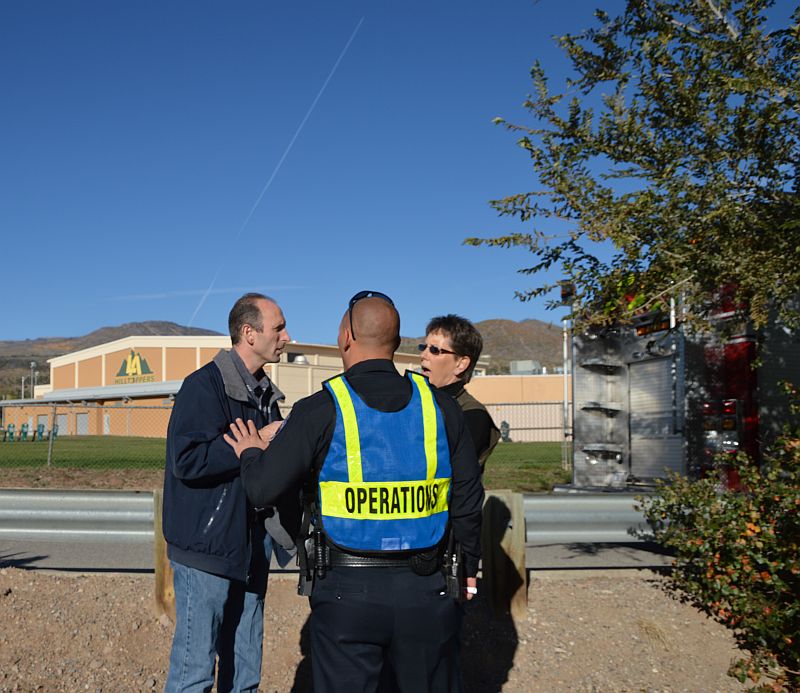 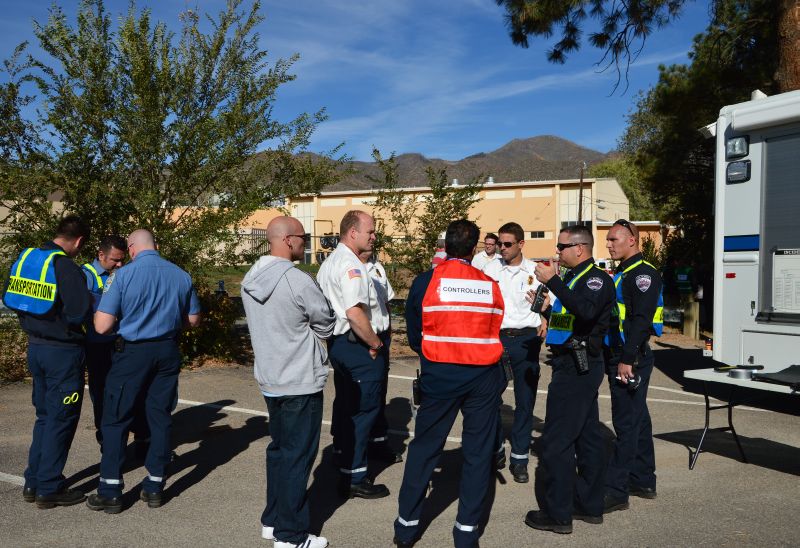 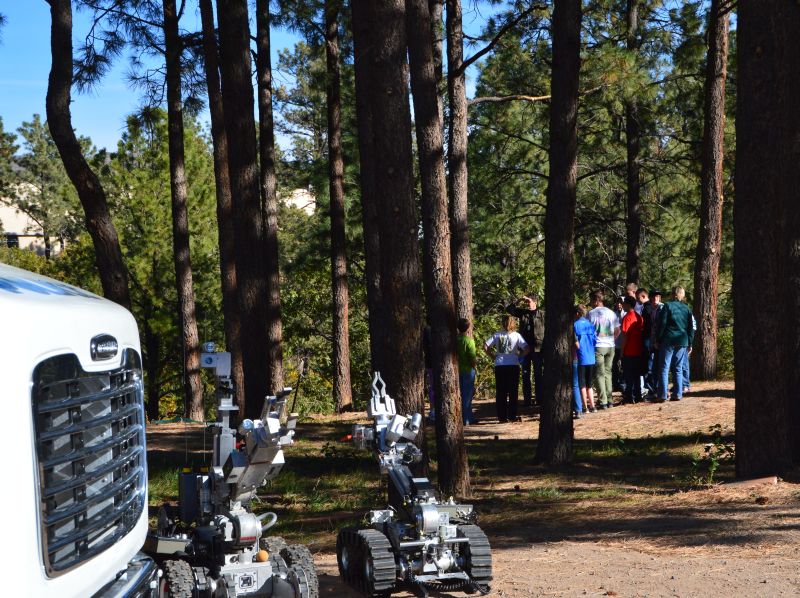 Chaplain Jenn Bartram counsels students and staff in a wooded area near the incident command center as part of today’s emergency response exercise. Photo by Carol A. Clark/ladailypost.com 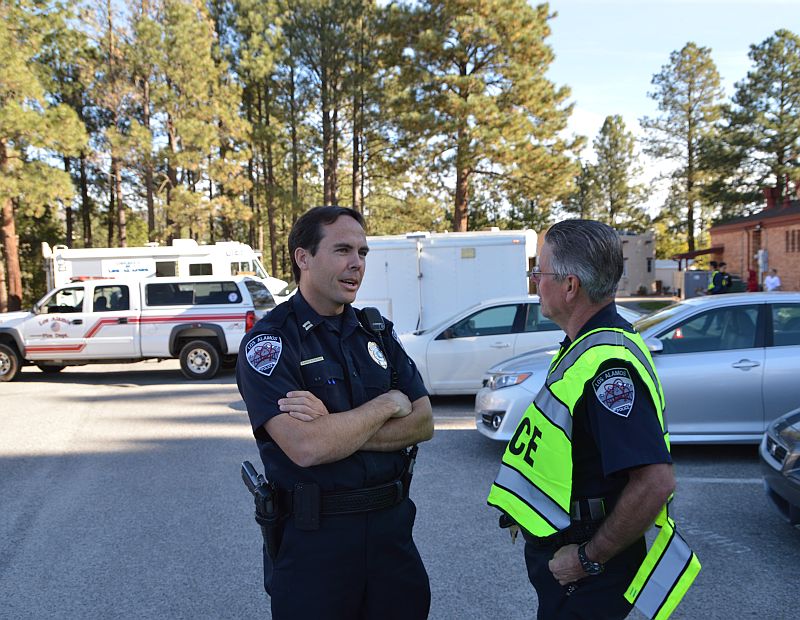 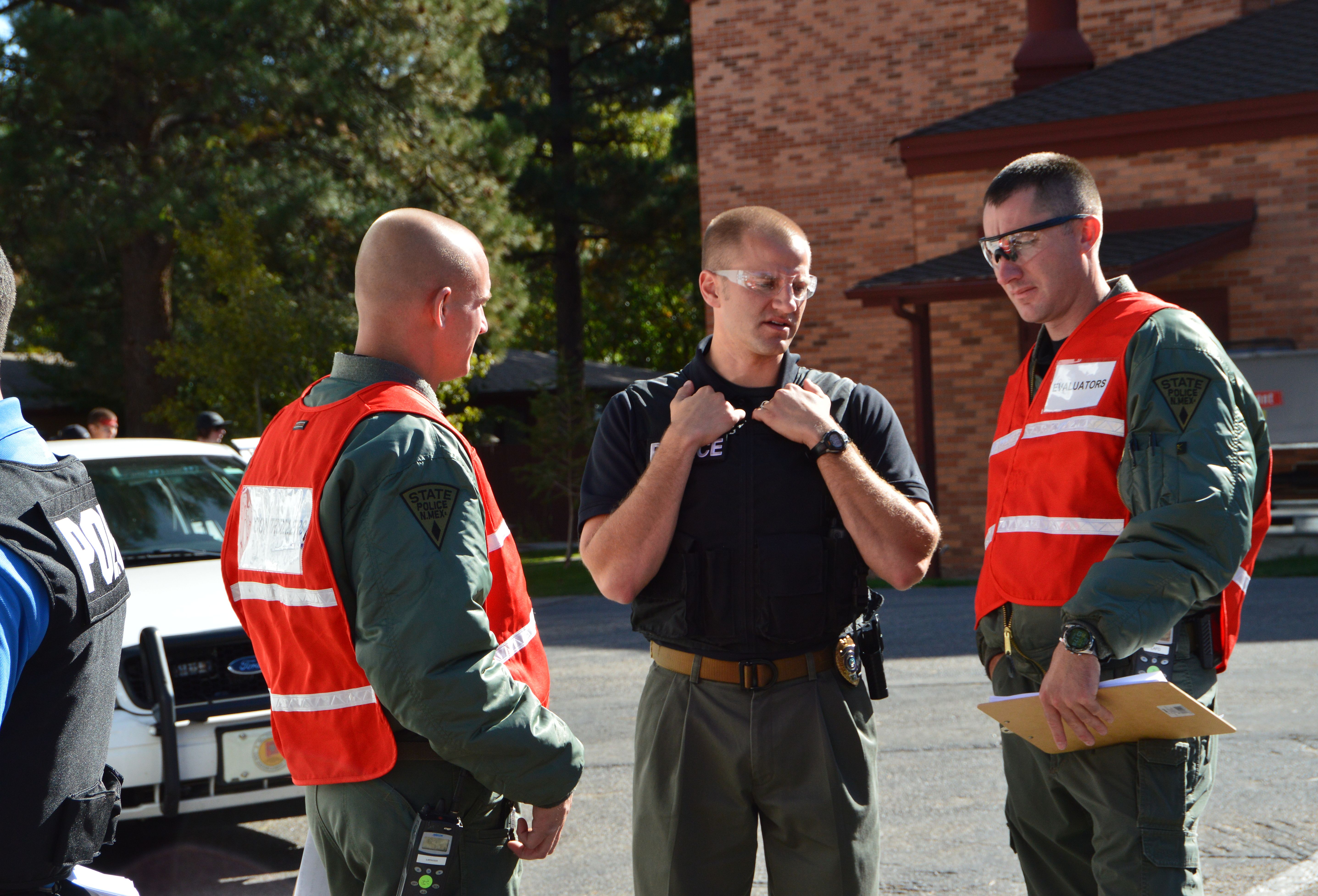 Det. Sgt. Oliver Morris, center, speaks with controller/evaluators as the exercise winds down. Photo by Carol A. Clark/ladailypost.com 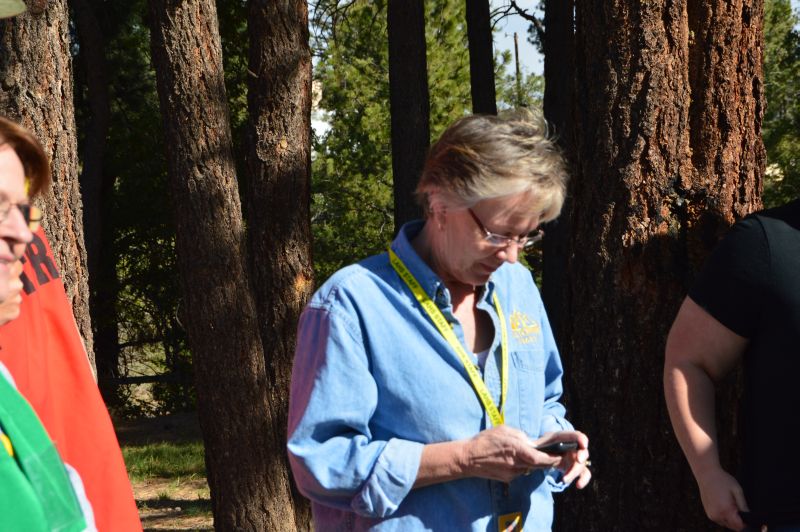 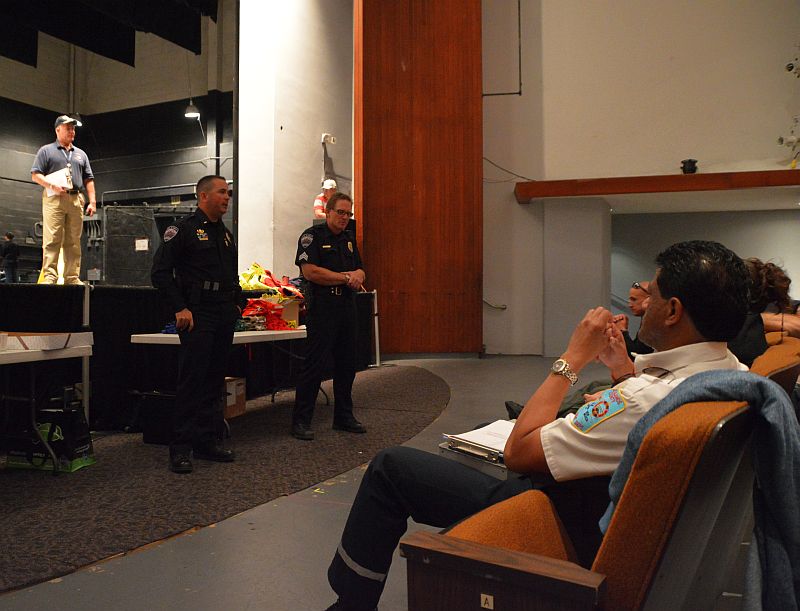