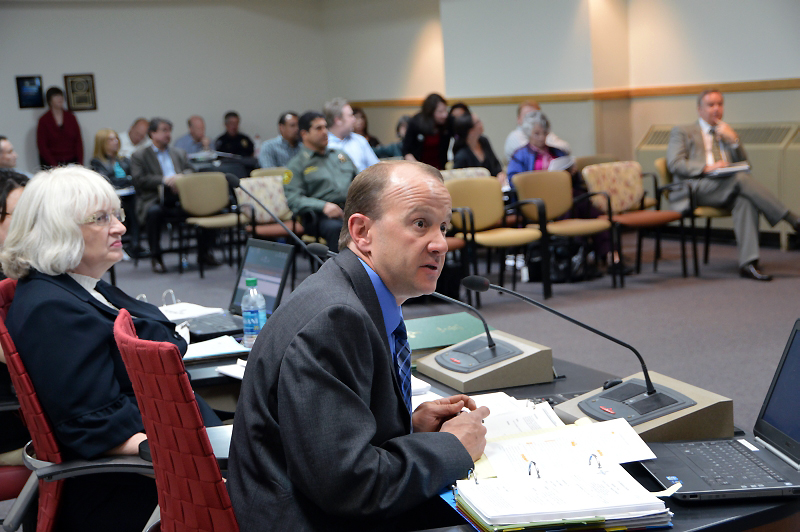 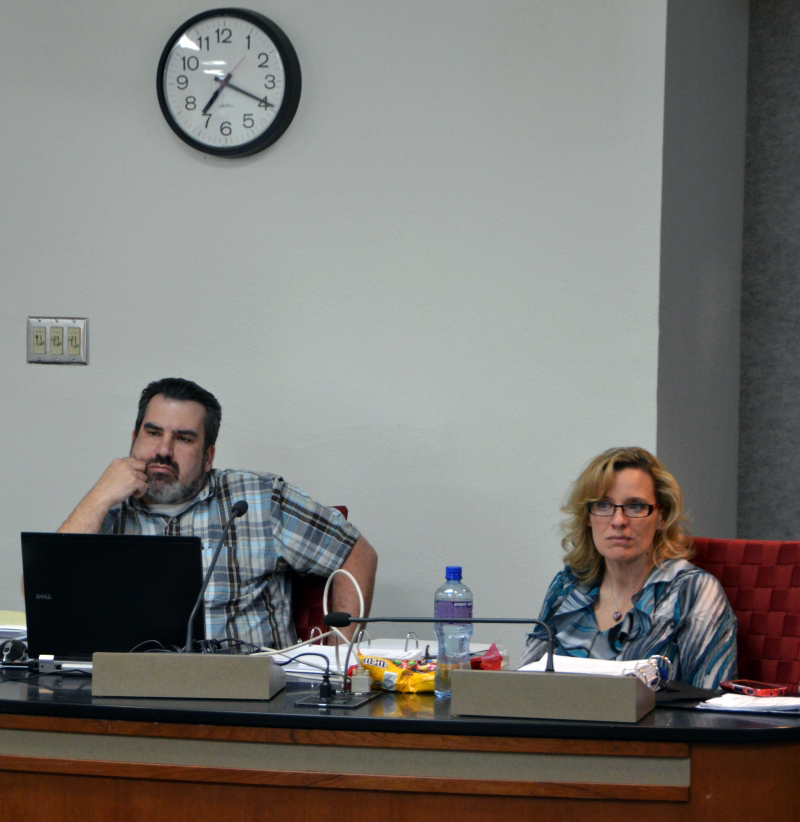 Los Alamos Deputy County Administrator/Chief Financial Officer and Budget and Grants Manager Gina Coluzzi Torpy present highlights of the FY2014 budget to Council. Lynne explained that a $5 million increase in the proposed $185,928,637 budget is a change in accounting and not an increase in the budget. He also explained the various reductions achieved in the proposed budget. Eight fulltime positions are being eliminated by attrition and replaced with four part time positions. Photo by Carol A. Clark/ladailypost.com

The budget could be potentially adopted on April 16 or April 17, depending on timing of hearing discussions.

Public Hearings: The first and last 30 minutes of each of the meetings will be reserved for public comment on any portion of the proposed budget. Note: The public hearing times
overlap with the budget presentation and discussion times. During this overlap time, public comment will be the primary activity. After all public comment has been received, if time
remains, other budget topics may be discussed.

Budget Adoption: The Council will consider final changes and adoption of the budget on April 16, 2013 or April 17, 2013, depending upon timing of discussions. If the budget is not
adopted at one of these meetings, then it will be considered for adoption at the regular Council Meeting on Tuesday, May 7, 2013, scheduled to begin at 7:00 p.m.

While the schedule below indicates that certain portions of the budget will be presented and discussed on specific dates, these are subject to shift earlier or later based upon the actual
timing of the discussions.

Consideration of Budget Adoption if not adopted on Tuesday, April 16, 2013 or Wednesday, April 17, 2013
Order of General County Operating Budgets

Parking Lot – Outstanding / Unresolved Items
Any changes made or direction received during the budget hearings will be incorporated into the proposed budget. Attachment A, Summary of changes from proposed to adopted will be updated as Council makes changes.

BUDGET ADOPTION
Budget adoption occurs after County Council has reviewed and considered the FY 2014
Proposed Budget at budget hearings. The attachments described below are being presented here for final consideration and adoption.

Approval of this list (Attachment E) at this point in time will eliminate the need for additional formal Council action for routine replacement of vehicles at a later date.

Each year departments are required to notify Council of their intent to apply for recurring grants. This will eliminate the need for additional formal Council action at a later date unless actual received amounts are different than originally budgeted. If that is the case, these routine adjustments will be lumped together and brought before Council during mid-year budget
revisions.

In addition to adoption of the budget, carryover of certain current year budget items are presented at this time because of their routine nature. There are six basic categories for
these appropriations, five of which are proposed for consideration at this time:

Alternatives
Council may amend the proposed budget. The State requires that the governing body adopt its budget each year with requests due by June 1. State statute does not allow for an
extension to this deadline.