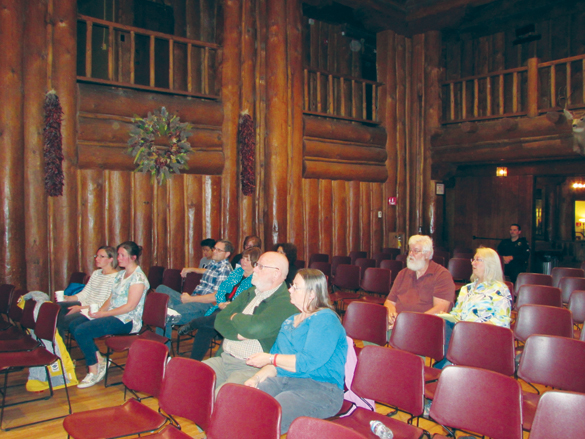 Members of the public give input on how to lower driving speeds by Mountain Elementary School during a public meeting hosted by the County Public Works Traffic and Street Division Wednesday night at Fuller Lodge. Photo by Kirsten Laskey/ladailypost.com 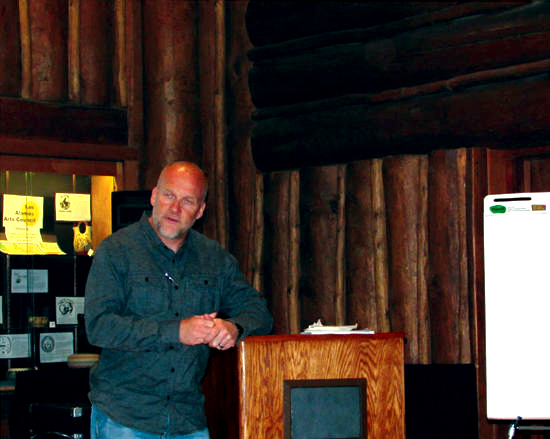 The Los Alamos County Public Works’ Traffic and Streets Division and members of the public brainstormed Wednesday night ways to get drivers to take their foot off the gas pedal when driving by Mountain Elementary School between Yucca and Urban streets.

While drivers are not typically speed demons when school begins and ends, Traffic and Streets Division Manager Daniel Erickson said there are concerns of cars going at speeds of 40-50 miles per hour in the early morning and late in the evening. He reported that a speed study conducted Oct. 26 through Nov. 11 revealed 85 percent of cars heading northbound traveled at 29 miles per hour while 85 percent of drivers traveling southbound drove 32 miles per hour. The speed limit is 25.

Citizens concerned about speeding submitted a petition to the Los Alamos County Council in November and Council directed staff to conduct a study on speed and work on a solution. Speed trailers were set up and the Los Alamos Police Department increased its presence near the school. While several attendees at the meeting said both the trailers and the police presence has helped, Erickson and other Public Works officials were looking for a permanent solution.

They suggested installing horizontal “bump outs” or widening the curb to make the street narrower, similar to the curbs on Central Avenue.

“The narrower you make a thorough-fare, the more uncomfortable you are to go fast,” Erickson said.

He added speed humps were considered but it was believed they might cause too much damage to cars.

Several people at the meeting expressed skepticism that the bump-outs would work; they felt speeders would simply drive in the middle of the two lanes to avoid the bump-outs. Retired Public Works Director Kyle Zimmerman said bump-outs work when there is a lot of traffic but he felt there wasn’t enough traffic in front of Mountain Elementary School for them be effective. He also spoke out against the speed humps.

“If we do the humps, the issue is people hate humps and will try to avoid them,” he said.

Some of the alternatives recommended at the meeting include the installation of a median and striping the road and reconstructing it to be a chicane with a feature creating extra turns to help slow cars down.

“We do want your opinions,” she said.

“I appreciate so much the police department,” Guy said.

Erickson said all public comments will be considered and a second public meeting will be scheduled during which a final proposal will be presented. The proposal also will be shown to the Transportation Board and the County Council will be notified of the final solution. It could possibly be presented during a future Council meeting. After that, the design implementation phase will begin.

Erickson said if everything goes smoothly, design implementation will start either at the beginning or the middle of summer.

Erickson said he was pleased with the first public meeting. “I think it went really well,” he said. “He added that he appreciates the public coming out on a weeknight to provide their thoughts on the project.

“The only way to effectively serve the citizens is to get their input,” Erickson said.