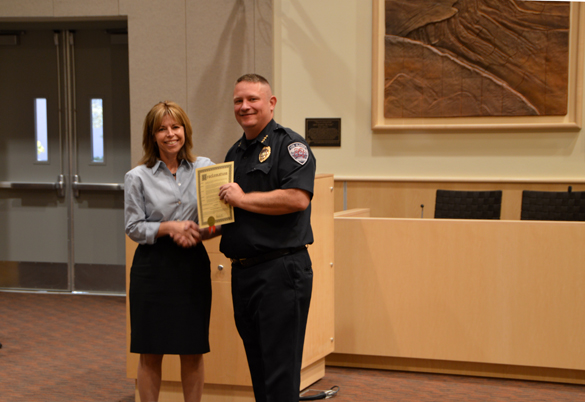 Councilor Susan O’Leary presents a proclamation to Police Chief Dino Sgambellone declaring the Week of May 11-15, 2015 as ‘Police Week’ and Friday, May 15, 2015 as ‘Peace Officers’ Memorial Day’ in Los Alamos County. Photo by Carol A. Clark/ladailypost.com 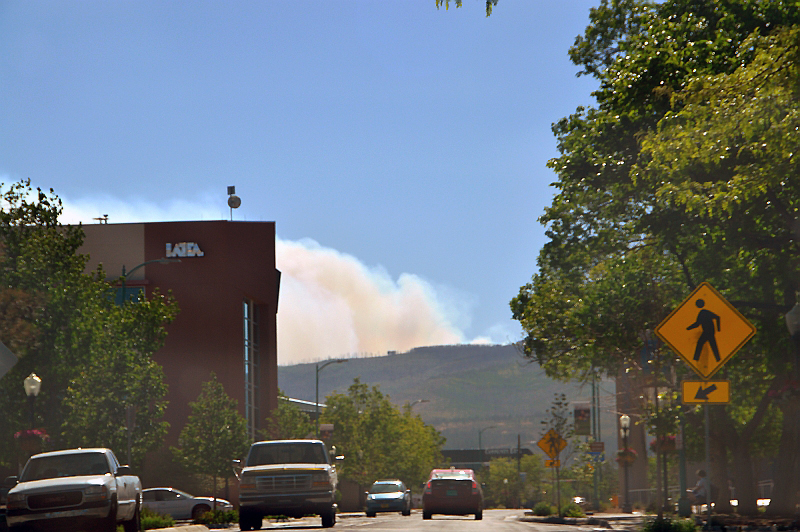 Los Alamos Police Chief Dino Sgambellone invites Council and the community to join him and his officers at a brief memorial service at 9 a.m. Wednesday, May 13 in the north parking lot of the police station. Photo by Carol A. Clark/ladailypost.com

Councilor Susan O’Leary presented the proclamation to Police Chief Dino Sgambellone on behalf of the council.

WHEREAS:      the Congress of the United States has designated May 15th of each year to be Peace Officers’ Memorial Day, in honor of all fallen officers and their families, and U.S. flags should be flown at half staff; and
WHEREAS:      It is important that all citizens know and understand the problems, duties and responsibilities of their police department, and that members of our police department recognize their duty to serve the people by safeguarding life and property, by protecting them against violence or disorder, by protecting the innocent against deception and the weak against oppression or intimidation; and
WHEREAS:      Nearly 60,000 assaults against law enforcement officers are reported each year, resulting in approximately 16,000 injuries, and since the first recorded death in 1791, over 20,000 law enforcement officers have been killed in the line of duty, including 622 corrections officers; In 2014, 127 officers were killed in the line of duty, and another 41 officers have lost their lives while serving in uniform in just the first four months of this year; and
WHEREAS:      It is important that we pay tribute to the officers who have fallen in the line of duty and recognize the sacrifices made by the families of those officers, as well as the families of those who continue to protect and serve our communities; and
WHEREAS:      It is critical that we acknowledge the dedication of those who continue to serve and who are willing to undertake the crucial roles and responsibilities of law enforcement and corrections officers within our communities, and commemorate and honor the dedicated service of officers past and present;
NOW, THEREFORE, on behalf of the Council of the Incorporated County of Los Alamos, I do hereby proclaim the Week of May 11 – 15, 2015 as
“POLICE WEEK”
AND FURTHERMORE, declare Friday, May 15, 2015 as
“PEACE OFFICERS’ MEMORIAL DAY” in Los Alamos County, and call upon our citizens to publicly join in commemorating law enforcement officers, past and present, who, by their faithful and loyal devotion to their duty, have rendered a dedicated service to their communities and, in so doing, have established for themselves an enviable and enduring reputation for preserving the rights and security of all citizens.
Menu
LOS ALAMOS