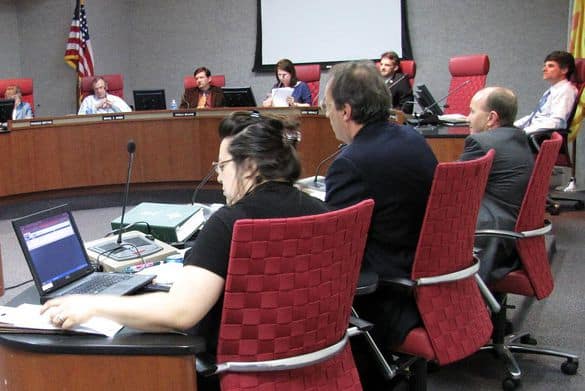 Gloria Maestas prepares to take the role of councilor votes for the new, updated compensation plan for county employees. Photo by Carol A. Clark/ladailypost.com

Two councilors disagreed with the motion on the table at Tuesday night’s council meeting, but in the end, the measure passed 4-2.

Councilor Vincent Chiravalle voted no saying that he felt that county employees were paid well and did a good job – not requiring additional incentives.

“I believe our current compensation plan has served us well and I see no reason for changing it,” he said.

“I think the market study was too narrow, it should have included a comparison with the private sector,” he said.

Councilor Ron Selvage expressed misgivings with the comparison study but said that he would go ahead and vote to approve the measure.

He asked staff to be more thorough when the issue comes back around in four years.

Under the County Charter, the county administrator is required to establish, maintain and publish a complete set of job classifications and descriptions that must be reviewed no less frequently than once every four years.

The County Charter, County Code and Personnel Rules and Regulations provide the basic framework through which the job classification and compensation system is maintained and administered.

The Council is required to approve any new or revised job classes and the abolishment of any existing classes.

Additionally, the human resources manager is required to conduct at least bi-annual salary surveys of the pay plan, which the county administrator in consultation with the personnel board, uses to make pay plan recommendations to Council.

As a result of the 2010 market study recommendations, Council directed staff to conduct a classification and internal alignment study.

The goal included reducing the number of job levels and titles throughout the County.

They also were asked to develop a method to address an increasing number of employees being paid at the top of their salary range and to eliminate the payment of lump sum performance awards.

In February, County staff discussed the compensation philosophy approach at a Council work session, and then worked with the consultant to develop a new salary grade structure and to place all job classifications within that structure.

The job description review resulted in a reduction in the number of job classes from 269 to 230 – approximately 14 percent.

This was achieved through consolidating similar titles and eliminating obsolete titles, and the removal of approximately 16 jobs that became unionized during 2011.