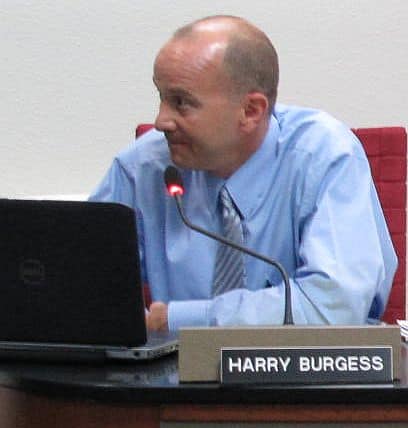 Burgess was appointed as County Administrator in October 2011.

“I reviewed the organization after meeting with Staff to gather input, then worked to develop the best path forward for the organization,” Burgess said after the meeting, adding that he had also taken the last few months to review the County’s Strategic Goals and evaluate areas where he felt the staff could take on a more active role.

“I’m interested in finding the best way to structure our staff and skills to meet the short and long range goals for our community,” he said. “With an expected decrease in LANL tax revenue forecasted for next year, I believe these organizational changes will help us to meet the needs and desires being expressed by the community, while continuing to provide the same high level of services and programs.”

Burgess explained that the new organization will be structured to make some significant changes to the those departments or initiatives that have received a high level of public scrutiny and interest in the last year, as he noted when he interviewed with the County several months ago.

At the executive level, this includes a change to jobs and staffing levels within the County Administrator’s office. Burgess had already received approval from Council two months ago when he requested a mid-year budget revision for a Deputy County Administrator, a job title that previously existed several years ago.

At Wednesday’s meeting, he announced that after interviewing several candidates for the position, he has promoted Brian Bosshardt, the current Assistant to the County Administrator, to fill that job.

He has also changed the job title for Steve Lynne, the Acting Assistant County Administrator, to be a Deputy and promoted Lynne to that position. Lynne was the former Administrative Services Director and had been in the Acting role for over a year.

Burgess said that Bosshardt’s vacated position will not be filled, in order to mitigate cost impacts on the CAO budget.

“The total number of top-level positions in the organization prior to this restructuring will remain unchanged by this action. Instead, the reorganization promotes two existing staff members into new roles,” Burgess said.

Lynne had oversight of the Administrative Services Department and its divisions, which include the Office of Management and Budget, Purchasing/Risk Management and Information Technology.

However, Burgess complimented Lynne for his role as Acting Assistant County Administrator and said his professionalism and insights into the County and community led him to reach his decision to offer him the new Deputy position.

“Steve Lynne has been with the County for nearly 14 years,” Burgess said. “He brings valuable planning and budgeting experience to this position and a wide breadth of knowledge about the various County departments and functions. He is an outstanding contributor to our organization and has earned the respect of his peers, the Council, and the community through the years. His ability to manage critical fiscal resources and his insightful observations about our long range financial plans make Steve a great addition as a new Deputy County Administrator.”

Burgess said he was equally enthused about Bosshardt’s decision to accept his offer to join the top management team.

Bosshardt joined the County in 2010, and currently serves as the Assistant to the County Administrator, as well as providing oversight to the Environmental Services Division and the Los Alamos Airport.

He has been active in intergovernmental relations, leading efforts for Council-related initiatives such as Progress through Partnering and the newly formed Regional Coalition of LANL communities.

He is the County’s liaison on matters involving environmental remediation or clean up with DOE and LANL counterparts.

The County has been aggressively promoting the need for clean-up funding at the federal level for several years, and Burgess said that Bosshardt’s expertise in this area has been very valuable to him.

“Based on his past performance with the County, Brian has proven to me that he has exceptional skills and ability to think strategically,” Burgess said. “This is exactly the kind of support I will need to execute the objectives we need to accomplish in order to reach our community’s strategic goals in the years to come.”

He added that Brian’s intergovernmental relationships with DOE, LANL and the State Environment department regarding environmental initiatives would be beneficial in his new position.

“Brian is already a familiar face to DOE, LANL and Northern New Mexico,” he said. “He will also play a key role in assisting me with several strategic projects I would like to pursue, such as leading efforts to implement Council’s direction to us to improve overall organizational excellence. He has a strong background in process management that will be beneficial.”

The Council expressed a strong desire for making process improvements to operations during their 2011 strategic planning session, indicating that they felt such improvements could increase efficiency, improve customer service and save taxpayer dollars as a result. As the Assistant to the County Administrator, Bosshardt has already been working across many of the divisions to undertake process improvement activities, Burgess said.

Burgess said that the other major change he is proposing will address the observation discussed earlier this week in budget hearings: the Community Development Department (CDD) currently has most of the responsibilities for meeting Council’s goals, and yet still has a vacancy for a Department Director – a situation that has existed for nearly a year and a half.

During budget meetings, Burgess said the Economic Vitality Administrator and the Marketing Specialist jobs would be moving from the CAO to CDD in FY 13, to better bring together goals of economic development, housing, and developer-friendly processes such as permitting together in a “one stop shop” environment.

To that end, this evening he announced that he is merging the Capital Projects & Facilities Department (CP&FD) with the Community Development Department and promoting Anne Laurent as their new director. Laurent currently has oversight of CP&FD, and previously has served as Acting Assistant County Administrator.

“Anne brings a demonstrated ability to implement the County’s projects and goals, as well as a capacity to work with disparate interests within the community,” Burgess said. “Her professional endeavors have included significant interaction with state and local development entities, and I believe she possesses the leadership skills and experience to address the identified needs of the County’s development process, as well as the overall duties of the newly merged department. “

Burgess said he is proceeding with plans for the reorganization this week and will follow up with Council about the status of other positions at a subsequent Council meeting.

These vacant positions, in addition to those listed above, include the Community Services Director and Public Works director.