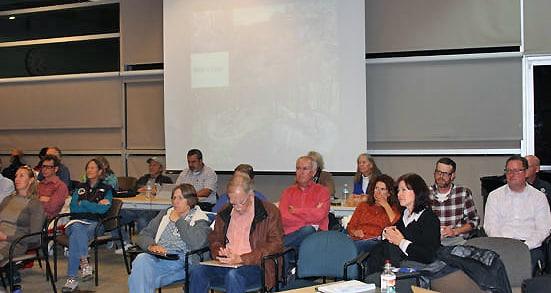 The proposed bike flow trail has encountered several roadblocks. The obstacles range from the budget for the project to the trail’s location. Despite the bumps in the road, Los Alamos County Council decided to forge ahead with the flow trail.

In a 5-1 vote, Council approved to discuss with the Department of Energy the possibility of receiving access to certain areas in DP Canyon, Los Alamos Canyon, Walnut Canyon and Acid Canyon to potentially build the trail in one of these areas.

The motion was approved during council’s work session Oct. 16 in the White Rock Fire Station. Depending on the outcome of those discussions, the County would then move forward on the project.

Councilor Susan O’Leary voted against this motion and Councilor Morris Pongratz was absent from the meeting. O’Leary said she preferred the issue be taken to a citizen board such as the Tourism Implementation Task Force and Parks and Recreation Board to gather input and information. She said it would be better if the County could define what it wants before making any requests to DOE. She added that the project shouldn’t be terminated.

“I think we shouldn’t lose sight of what we were trying to do,” O’Leary said.

Council Chair David Izraelevitz argued that while he did not want to see the project be discontinued … he also didn’t want the County to spend more money if it doesn’t have any access to areas that would be suitable for a bike flow trail.

Hogan Koesis is director of mountain biking for Mountain Capital Partners, which is the contractor tasked with developing a bike flow trail. During Tuesday’s meeting, he described a bike flow trail as being smooth, fun, safe, predictable, navigable and user friendly and relevant to designs.

Originally the County considered creating the bike flow trail in Bayo Canyon. The purpose behind the trail was to further enhance the County’s tourism amenities. However, Koesis said there were problems. One being budget. The council budgeted $50,000 for a 7-mile trail. He said this wasn’t money enough to cover that amount of trail and make it adhere to the International Mountain Biking Association’s standards for “green” or beginner level biking trail.

He further pointed out that putting the trail in Bayo Canyon was a controversial choice because many members of the equestrian community felt it would limit their access to Bayo Canyon and cause safety issues. In fact, in his presentation Koesis said none of the County land would be conducive to a 7-mile family friendly bike flow trail.

The public also weighed in on the project.

Brad Nyenhuis, owner of the former Fusion Multisport, asked the council to continue the project. He argued the project started as economic development. He pointed out mountain biking is a huge industry. The flow trail could be the kick off for turning Los Alamos into a mountain bike destination, he said.

The project “is worth taking time to do it rather than doing it fast,” Nyenhuis said.

Amy Rogers, a representative of the equestrian community, read a written statement during the meeting. The statement discussed a petition that was submitted to the County Council regarding putting the trail in Bayo Canyon.

Clay Moseley said, “I just want to say thank you for all of the time and energy you spent on this.”

He added he felt the project still has merit and noted that with the County’s gross receipt tax from the laboratory an uncertainty, the County needs to diversify its tourism profile.