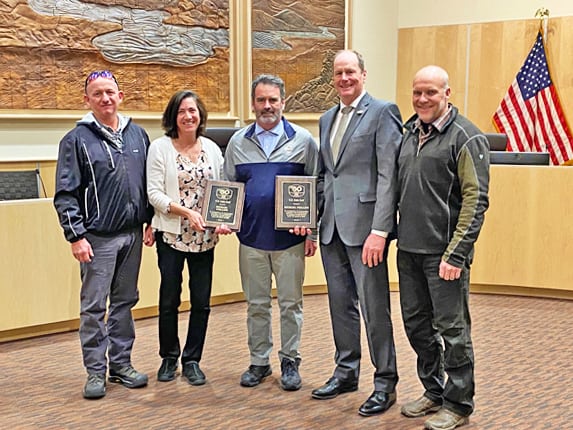 Los Alamos County Head Golf Professional Michael Phillips is a multi-award winner. Not only does Phillips hold numerous awards but he is a two-time recipient of the Top 50 Kids Coach by U.S. Golf, which is the highest distinction for youth coaches.

“This is the highest distinction for youth coaches,” she said.

This award was officially presented to Phillips Jan. 22, at a special presentation during the PGA Merchandise Show in Orlando, Fla.

In addition to being honored by U.S. Golf, Matteson said Phillips received the Los Alamos County Leadership Coin for his achievements.

“Michael is an excellent example of always driving for improvement and going above and beyond in his work,” Matteson said.

Phillips told the Los Alamos Daily Post that “It’s very humbling to receive this award not just once but twice.”

He added that the caliber of his fellow award recipients was very high.

Phillips emphasized that this achievement is not his alone.

“It was a team effort,” he said. “I represent the program but there were so many people who helped … it’s just wonderful for the County Councilors to recognize the good work of the County.”

Phillips said he has been involved in golf for 40 years.

As a high schooler, he said he helped his father with his golf activities.

Teaching golf to young people is meaningful, Phillips said, because it is an opportunity to work with young people and help them become not only good golfers but good citizens.

The Top 50 Kids Coach Award, according to agenda documents, recognizes coaches who have excelled in developing players, fostering a positive environment, and using the best available resources to help advance their students. The Top 50 Kids Coaches of 2019 includes golf professionals from 25 states, and seven countries including Australia, Austria, Canada, England, Hong Kong, Italy and Northern Ireland.

Each year, award recipients include coaches who work at public, private, resort and municipal courses.