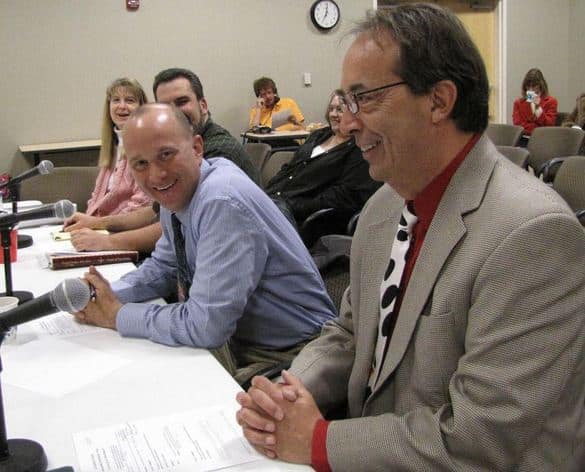 It was universally agreed at Tuesday’s county council work session that Los Alamos County employees are at the higher end of the market in terms of pay structure. But there are some glitches that need to be addressed.

The meeting focused entirely on the county’s compensation philosophy and whether and how best to develop a policy to alleviate the issue of longtime employees maxing out at the high end of their pay grade. Also, discussion centered around how to provide merit raises to high performers who have maxed out in their current positions.

“Currently, we have no red circled employees (above the maximum pay range) – but we do have close to 50 employees who are at the maximum – and that’s a concern,” said acting Assistant County Administrator/Chief Financial Officer Steven Lynne.

Those 50 employees equate to about 8 percent of the county’s workforce and the vast majority of those nearly 50 employees are in the bottom half of the pay structure.

Most employees who fall into that category are from the custodial and clerical groups, Lynne said.

County Administrator Harry Burgess and Human Resources Manager Denise Cassel joined Lynne in briefing the council on the possibility of bringing the median pay grade for employees to 75 percent to be competitive.

Councilor Fran Berting asked if that meant that the center of the grade would move up so the midpoint between the bottom and top of the range becomes the 75th percentile, to which Lynne answered yes.

Lynne explained that the first part of this pay structure review process was to look at county job descriptions. An independent consultant was hired and has researched the county’s pay structure, measuring it against other municipalities. The consultant just submitted its draft to the county, so results weren’t yet available for Tuesday’s meeting.

“Taking into account the cost of living in Los Alamos, if 75 percent of the market value puts a job in the red circle then I’d say we are probably paying too much for that job; not necessarily for that person, but for that job … the county should help that person who is red circled to achieve the next higher position or to move into another department,” Selvage said.

Councilor Geoff Rogers expressed the need to exercise caution in making any changes to the county’s existing pay structure.

“We need to be careful about the impact on our system, county and everything else when we start down this road – I think what we really need is a very well designed pay plan so we don’t have to go down this road,” Rogers said.

Council addressed the fact that the county pays its employees well not only to attract and retain quality people so it can provide top-notch services, but also to compete with salaries at Los Alamos National Laboratory and to offset the community’s relative isolation.

“We need something to attract people to this small, less urban town, besides the fact that we want to provide excellent services,” Councilor David Izraelevitz said.

Councilors also spoke of the importance of performance based pay incentives for employees, apart from annual cost of living raises.

Under the current structure, employees who’ve reached the top of their pay grade are not eligible for pay increases, for which council expressed concern.

“If you are a high performer and you’ve maxed out, yet everyone around you are getting raises (even those performing at the bare minimum), that can be a concern,” Rodgers said.

“We have in place a system based on merit – when you exclude a small percentage (employees at maximum of pay grade) … you, in my mind, nullify that merit system,” he said.

Burgess explained that the changes now under consideration to the pay structure are designed to correct the current system.

Councilor Vincent Chiravalle brought up a study conducted for the county in 2009 and questioned why they weren’t just using those results. Lynne explained that some of those results weren’t relative to Los Alamos.

“We are a city and county so the breadth of our service is beyond that of a local government,” Lynne said. “Also, some of the factors they site are for large organizations where many people are in the same job titles … .”

Chiravalle also asked that council receive a report on how many hours of overtime employees are working and how much the county is paying for that overtime.

“This is something council needs to know at budget time,” he said.

Staff will review the current consultant’s draft of the county’s pay structure and with comments from Tuesday’s meeting, develop recommendations to present to council at a future meeting.