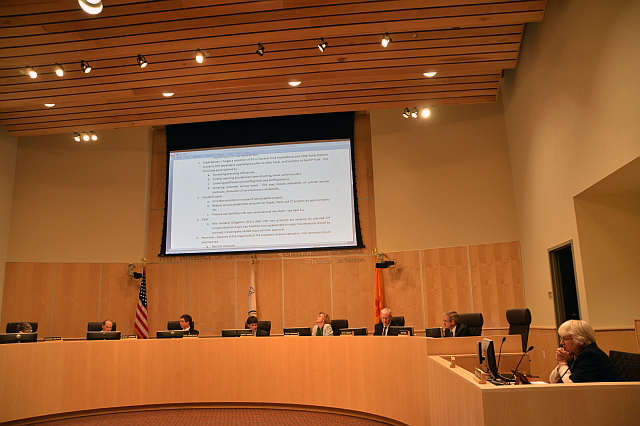 The Los Alamos County Council voted 6-1, with Councilor Pete Sheehey voting no, to approve the Budget Guidance for FY 2015 as amended below:

The Gross Receipts Tax (GRT) revenue for fiscal year (FY) 2014, and for future years, is projected to be lower than in previous years. Since this is the primary funding source for most general governmental operations and capital projects, some changes must be made in order to move back toward having a balanced budget.

Given this context, Council would expect that the FY 2015 proposed budget would be developed with noticeable changes in all of the following six categories.

1. Fund Balance – use of fund balance is expected when severe revenue fluctuations occur. The following parameters serve as guidelines.
a. Use of up to 100 percent of the Fund Balance Committed for Revenue Stabilization through the end of FY 2017 is acceptable as long as the projected balance at the end of FY 2019 returns to the policy target level of 5 percent of revenues. This is an extension beyond the current financial policies.
b. Manage all other variables so that the Unassigned Fund balance is maintained at the policy target level of 20 percent of revenues.
c. Re-evaluate all fund balance levels for potential re-programming and possible re-capture back into the General Fund.
2. Expenditures – Target a genral overall reduction of 5 percent in General Fund expenditures, understanding that this is not an across the board mandate, and other funds that are primarily GRT dependent, operating transfers to other funds, and transfers to the CIP Fund. This should be accomplished by:
a. Increasing operating efficiencies
b. Further reducing discretionary items (training, travel, uniforms, etc.).
c. Lowering staff levels and staffing costs (see staffing below).
d. Consider lowering customer service levels. This may include reductions of outside service contracts. Reduction of service hours is acceptable.
3. Capital Projects
a. Consider delay and reductions in scope of future capital projects.
b. Reduce annual placeholder amounts for Roads, Parks and IT projects by up to 5 percent.
c. Finance new facilities with new revenues and new debt – see item 4.a.
4. Debt
a. New General Obligation (G.O.) debt with new property tax revenue for planned CIP projects that are major new facilities (not replacement or major maintenance) should be pursued, including the related required voter approval.
5. Revenues – because of the magnitude of the projected revenue reduction, new revenues should be proposed.
a. New tax revenues – focus on expenditure reductions rather than new tax revenues to balance the long range financial plan.
i. Property taxes – given the relatively low currently imposed County and Municipal rates, re-implementing the $1.5 million (which was removed in FY 2011) of property tax revenues is included in the FY 2016 projected budget.

b. User Fees – all remaining recently unadjusted user fees and the user fee policy should be re-evaluated and reasonable increases should be proposed while generally avoiding impacts to youth rates.

6. Staff
a. Limit salary increases in the FY 2015 proposed budget to 2 percent.
b. Staff levels should be reduced through attrition.