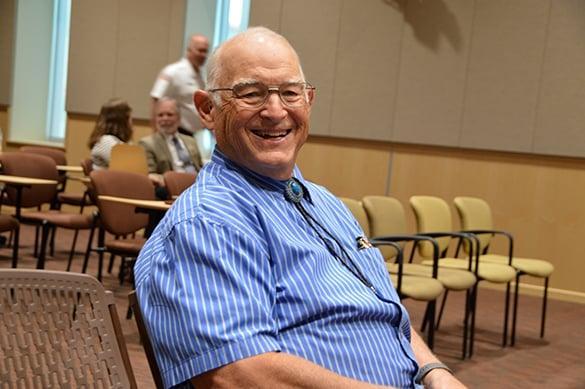 Morris Pongratz is the newest member of the Los Alamos County Council. Photo by Carol A. Clark/ladailypost.com
By KIRSTEN LASKEY
Los Alamos Daily Post
kirsten@ladailypost.com
Los Alamos County Council has a new member: Morris Pongratz. Pongratz was approved to serve the remaining six months on former County Councilor James Chrobocinski’s term.
Chrobocinski resigned from the Council in May for health reasons. Pongratz was approved to fill the seat during a special meeting Monday night. His nomination passed five to one. Councilor Susan O’Leary voted for another candidate, K. Michael Cleveland.
Immediately following the approval, Municipal Judge Alan Kirk swore the new County Councilor into office.
“It’s a great honor and a great challenge because we got some real threats facing us,” Pongratz told the Los Alamos Daily Post.
The threat Pongratz referred to is whether or not Triad National Security, LLC, which was awarded the operating contract to Los Alamos National Laboratory, will pay gross receipts tax (GRT) to the County.  If it does not, this will have a significant impact on the County’s budget.
The County’s budget and whether the laboratory will continue to pay gross receipts tax weighed heavily on a lot of the council candidates’ minds.
The other candidates were: Brady Burke, who is also running for a full term on County Council, David North, Laura Cortzer, Aaron Walker and K. Michael Cleveland.
Council asked each candidate six questions which ranged from their background in civic work to their thoughts on different issues facing the County.
Pongratz brings a lot of experience to the Council. Previously, he served six terms on Council. Additionally Pongratz was a member of the school board and the DWI Planning Committee. He also serves on the Community Health Council.
On top of that, Pongratz also was a member of two charter review committees.
“Community service has always been important to me,” he said.
Regarding the future of the laboratory’s gross receipts tax to the County, Pongratz said it would be “terribly unfair” for the laboratory to not pay taxes to Los Alamos. He pointed out 58 percent of the County’s gross receipts tax comes from the laboratory. If Triad National Security, LLC does not pay the tax, Pongratz said the County should fight it in the courtroom and in the legislature. He pointed out the County does have reserves but should focus on priorities such as “keeping the lights on.” Plus, he emphasized Council should listen to staff recommendations on the budget.
The other candidates weighed in on the GRT. When asked for their thoughts about what the County should do if the lab stops paying GRT, many felt the County should focus on spending its money wisely.
Cortzer said she felt the County should address its priorities in the event it loses the lab’s GRT. The priorities North said he felt needed to be fully funded were the fire and police as well as utilities. After that, he said, everything is up for debate.
Burke said he felt the GRT issue is a red herring. If the County manages its money right, it shouldn’t matter what is the revenue source, he said. Burke added the County should have passed a decreased budget rather than a fixed one.
Walker wondered if the lab GRT goes away, perhaps the County could negotiate a transition period with Triad to receive some GRT.
Cleveland said another opportunity to received revenue may open up if the County stops getting GRT from the lab. He pointed out tourism could be a potential moneymaker for the town. He further pointed out that every issue is passionate to somebody and it is just a matter of finding the right balance that everyone can live with.
Before voting on a nominee, many Councilors commended the candidates for applying for the position as well as for their caliber. They also encouraged them to apply for other boards and commissions.
Menu
LOS ALAMOS