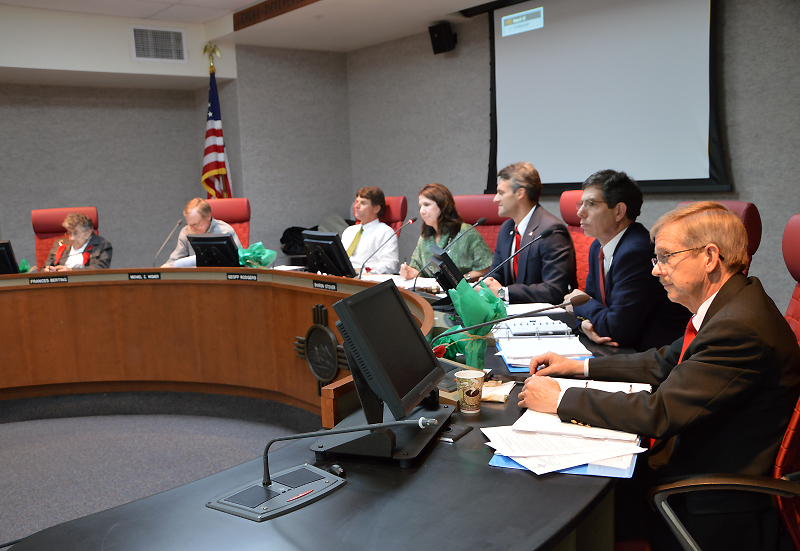 In its final meeting together because three members leave office Dec. 31, the Los Alamos County Council voted 7-0 to adopt the 2013 Los Alamos County Federal Agenda. Photo by Carol A. Clark/ladailypost.com
Staff Report
Los Alamos County Council voted unanamously to adopt the 2013 (FY 2014) Los Alamos County Federal Agenda. The County has many important relationships with the federal government. It regulates a variety of aspects of County functions.
The County must continuously work to understand, comply with, and provide input to federal laws and regulations that impact its operations. As such, it is critical that the County provide input to federal laws and regulations that may have a local impact.
Also, the Los Alamos National Laboratory (LANL) is a privately managed and federally funded national laboratory, which is the largest employer in the County and the economic engine for Northern New Mexico.
The significance of LANL, not only to the County but to the State of New Mexico and the nation, necessitates that the County work closely with the New Mexico delegation in respect to federal legislation and the safeguarding of LANL.
Over the years, the County has developed a valuable working relationship with the New Mexico Congressional delegation and the support received from them has been invaluable.
Annually, the Los Alamos County Council adopts a “Federal Agenda.” This document is used as a guide for its intergovernmental efforts at the federal level.
The Federal Agenda is developed through a Council committee that meets to produce the message and recommended County priority topics.
The Federal Agenda provides direction from the County Council to staff and its legislative support contractor when working with various Federal officials and entities, providing for a consistent voice in messaging.
When setting the County’s Federal Agenda, four broad sources are used for determining the County’s priorities:
· Regional, State, and National Organizations identified priorities;
· Staff recommended and identified issues;
· County Intergovernmental priorities; and
· Review of state and federal budgets.
For 2013, the committee and staff have recommended four priorities:
· Funding for National Security and Science at Los Alamos National Laboratory (LANL), including the CMRR Project;
· Environmental Cleanup Funding;
· Support for Manhattan Project National Park Service Legislation; and,
· Support for Valle Caldera Legislation.
Menu
LOS ALAMOS