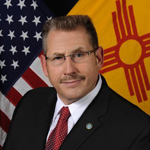 “Secretary Marcantel is a man of integrity who has worked tirelessly to keep New Mexicans safe,” Martinez said. “Under his leadership, we’ve taken a tough, but smart, approach to crime. Gregg is a good friend of mine, and I’m proud of all the work he accomplished at his department.”

Secretary Marcantel began his tenure by reducing unnecessary early releases from prison that had previously plagued the agency. Marcantel created a centralized records bureau responsible for monitoring and releasing offenders from prison safely and appropriately. He also expanded the Security Threat Intelligence Unit to focus on the more than 2,000 offenders who were on the run from supervision.

Other accomplishments under his watch include securing funding for an offender management computer system to ensure offenders are tracked, monitored and supervised correctly. All state prisons are now 100 percent certified in compliance with the Prison Rape Elimination Act thanks to reforms and efforts Secretary Marcantel implemented.

Secretary Marcantel added, “This was a tough decision to make, but I need to spend more time with my mother, who is suffering from serious medical conditions. At the end of the day, I need to do what’s best for my family.”

Secretary Marcantel is known for his three-decade career in law enforcement – covering everything from a field officer to captain at the Bernalillo County Sheriff’s Office. Marcantel also served as the Deputy Cabinet Secretary at Department of Public Safety before running the Corrections Department.

Secretary Marcantel’s legacy will be shaped around his prison reform measures, family reunification policies and offender accountability standards. Under his watch the department received pay increases for corrections officers and probation and parole officers, and carved corrections officers into an independent pay band structure to ensure competitive compensation is more easily obtainable in the future. Secretary Marcantel also led the reduction in the use of segregation, mandated 70 percent of inmate program must be evidence-based, and ensured all eligible inmates fill out a YES New Mexico application prior to leaving prison.