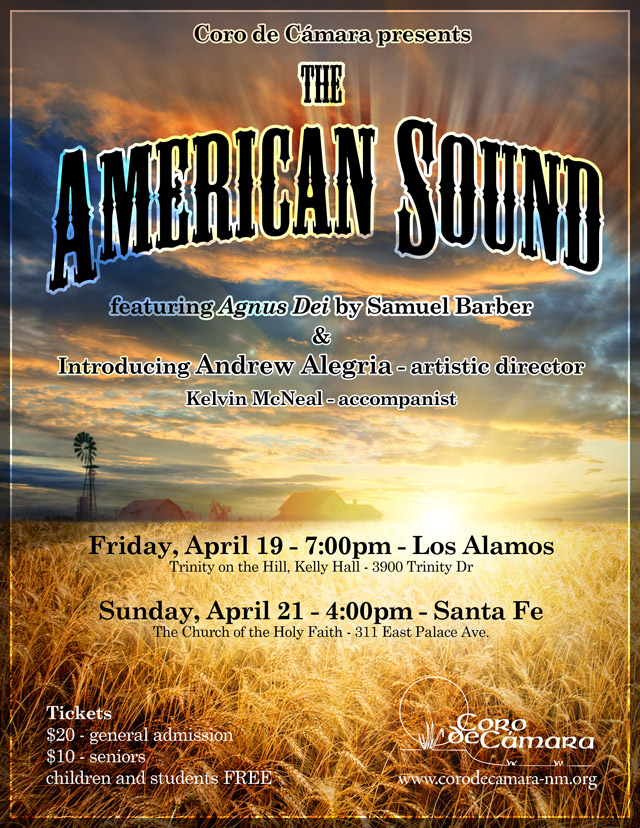 Andrew Alegria will debut his first concert with the group at 7 p.m. Friday, April 19 at Hill Episcopal Church in Los Alamos and 4 p.m. Sunday, April 21 at Church of the Holy Faith in Santa Fe.

His debut concert with Coro de Cámara is entitled “The American Sound” with works by Charles Ives, Aaron Copland and Moses Hogan among others, and features Barber’s Agnus Dei.

Tickets will be available at the door the day of the concert and may be purchased for $20 general admission, $10 seniors and free for children and students with valid ID.

Alegria is new to the northern New Mexico music scene, but has already demonstrated exceptional accomplishments in directing, performing and teaching in his young career.

He served as head of Music Ministry for churches in Albuquerque, Houston, Texas and Greenville, S.C. He was a performer with the Houston Grand Opera Chorus and chorus master of the Greenville Opera and the University of New Mexico Opera Chorus.

Coro de Cámara is a chamber chorus comprised of members from the Los Alamos and Santa Fe communities, which is performing its 29 consecutive year.

The group’s work is eclectic, ranging from Early Music to the Renaissance, Baroque and Romantic while demonstrating equal familiarity with 20 and 21 Century works from American folk to jazz, musicals, pop and contemporary classical composers.