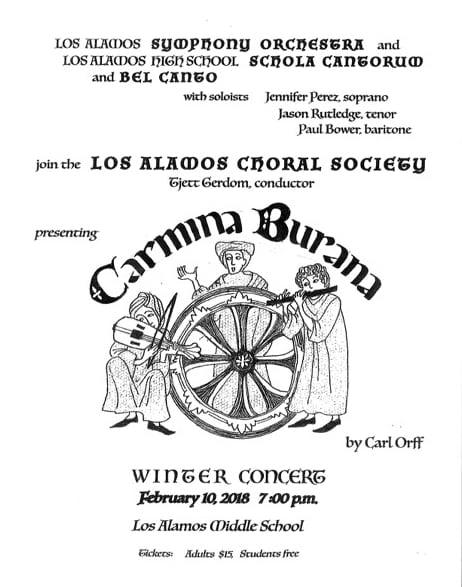 “Carmina Burana” is moving to a new location. It will not be performed at the Duane Smith Auditorium on Feb. 10, but it will be presented on that same day, at 7 p.m., at the Los Alamos Middle School Gymnasium.

The local production of Carl Orff’s massive choral and orchestral interpretation of a collection of medieval songs was scheduled to be the first production in the newly renovated Smith Auditorium. However, it became apparent early in January that the reconstruction of the auditorium lobby was not going to be completed in time.

Choral Society and its partners in the concert (the Los Alamos Symphony Orchestra and the Schola Cantorum and Bel Canto choirs from Los Alamos High School) totaled approximately 170 musicians. They had planned to hold their last several rehearsals and their performance in the auditorium, which could easily accommodate such a large group of musicians (and their instruments) plus a good-sized audience.

Suddenly, they were faced with serious questions.

Where do we go? Must we change the date of our winter concert?

Money was an issue, and timing was important. The LACS Board was concerned that the three soloists for the production—Jennifer Perez (soprano), Jason Rutledge (tenor), and Paul Bower (baritone) might have conflicts if the performance date was changed.

However, when Los Alamos Public Schools Superintendent Kurt Steinhaus was told about the problems the Carmina crew was facing, he and Schools Facilities Manager Herb McLean stepped in.

In an hour-long meeting held Jan. 5, 2018, at the United Church (which lent its meeting room for free), attended by Steinhaus, McLean, “Carmina Burana” Director Tjett Gerdom, all seven members of the LACS Board, and two representatives of LASO, the “very interested parties” discussed their dilemma in detail.

Steinhaus offered free use of the Los Alamos Middle School Gymnasium and some school risers for the concert and said he would look into letting the musicians use the old Pueblo Complex Gymnasium for their last few rehearsals.

And so, when you see a huge crowd pouring into the Pueblo Gym at 7 p.m. on Jan. 29, Jan. 30, Feb. 5, and Feb. 6, you’ll be seeing preparations for the final rehearsals for “Carmina Burana.” And when you see an even larger crowd pulling into LAMS shortly before 7 p.m. on Feb. 9 and Feb. 10, you’ll be witnessing the large musical cast assembling for the dress rehearsal, and, finally, for the performance of Orff’s music ($15 at the door for adults, students attend for free).

The solution may not be perfect, and it wasn’t reached without considerable anxiety and effort—but it’s a great example of just what can be accomplished when Los Alamos people work together.