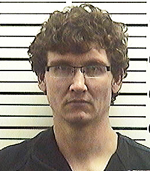 ALBUQUERQUE—Kyle Morrow, 30, of Los Alamos was sentenced this morning in federal court to 120 months in federal prison followed by 10 years of supervised release for possession of a visual depiction of a minor engaged in sexually explicit conduct.

Morrow will be required to register as a sex offender after completing his prison sentence.

According to the criminal complaint, FBI initiated an investigation into Morrow after staff at the half-way house found child pornography on his cellular phone and confiscated the phone. The FBI seized Morrow’s phone in February 2014 pursuant to a search warrant and submitted the phone for forensic examination by the New Mexico Regional Forensic Laboratory.

On Jan. 28, 2015, Morrow entered a guilty plea to a federal agency charging him with possession of a visual depiction of a minor engaged in sexually explicit conduct.

This case was investigated by the Albuquerque office of the FBI and the New Mexico Regional Forensic Laboratory, and was prosecuted by Assistant U.S. Attorney Jacob A. Wishard.

The case was brought as part of Project Safe Childhood, a nationwide initiative launched in May 2006 by the Department of Justice (DOJ) to combat the growing epidemic of child sexual exploitation and abuse.