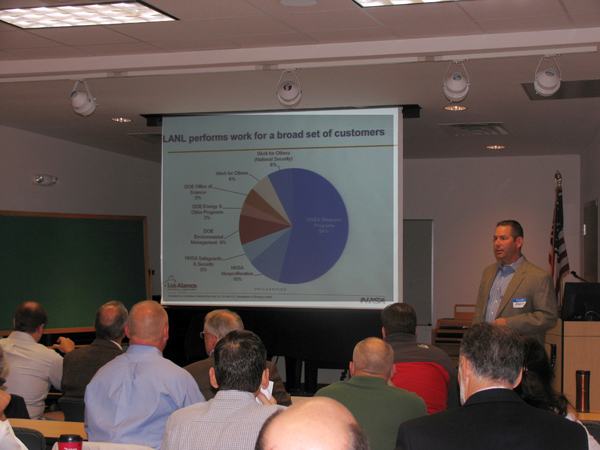 Los Alamos National Laboratory has adopted a new cost model for Fiscal Year 2013 and LANL contractors have expressed concern about the consequences the new model may have on their businesses.

The Los Chamber of Commerce organized a special Chamber Breakfast for LANL officials and contractors Nov. 1 at UNM-LA.

LANL Budget Officer K. Aaron Menefee gave a presentation designed to show why LANL has adopted the model and what it will mean for LANL contractors.

Cost model is the methodology for “taxing or burdening” labor and purchases to support overhead functions at LANL.

Customers, such as the Department of Energy, contracting with LANL are “taxed” based on the model.

The part of the new model most concerning to contractors is that the cost for supplemental labor obtained on purchase orders will increase by 50 percent from the previous cost model.

Supplemental labor, in a nutshell, means those workers who work for LANL contractors or for themselves, but are managed by LANL staff and work using LANL computers and equipment.

“We want to look to our own workforce first,” Menefee said. “We had built a system where it was cheaper to use supplemental labor than to use our own staff.”

While the new cost model reduces the overhead cost on non-capital purchases of less than $500,000, contractors worry that this savings is not enough to offset the increased cost of supplemental labor.

Several contractors said their clients are backing away from work they had previously planned to bring to their businesses because of the increased costs.

Contractors are concerned they and their employees will be sacrificed to the goal of retaining jobs for LANL staff.

“The benefit of using us [contractors] is that we can bring in people with a particular skill set for three or four months,” said Sandra Villa, owner  of SAV Associated Services, a provider of  operations and compliance integration solutions and specializing in DOE nuclear facility operations and safety.

Chamber Executive Director Kevin Holsapple said, “There has to be a balance … if you go too far, you’ll lose the flexibility and expertise that LANL contractors have to offer.”