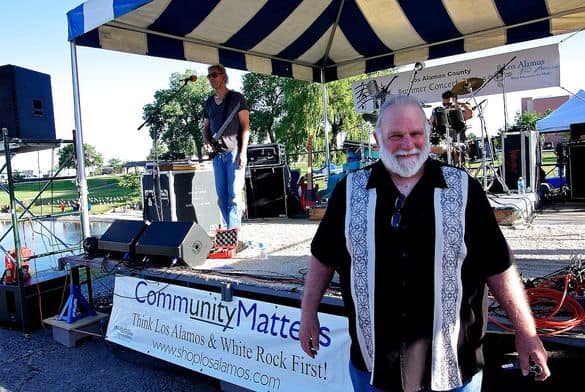 Summer’s here and every Friday night, big hunks of the population of Los Alamos can be found at the current Los Alamos Summer Concert Series show of the week, also known as the Gordon’s Concert.

Russ Gordon, father of the Concert Series, has been providing great free concerts in Los Alamos for 22 years.

Gordon didn’t start out to be a concert promoter. It just sort of happened.

Gordon was exercising his fanatical love of music by running Gordon’s CDs. The store opened in White Rock in 1988 and moved to the town site in 1993.

Gordon started inviting local musicians to play at his store. Some neighborhood high school kids asked him if they could play.

“I borrowed a flatbed truck and they played Led Zeppelin covers without the vocals since they didn’t know the words. That was our first free concert,” Gordon said.

After the store moved to the Mari-Mac Shopping Center, the concert series expanded when local businesses, including Los Alamos National Bank, The Hilltop House, CB FOX and Smith’s Food and Drug Centers, signed on as sponsors.

“The idea was to keep people in town on Friday night,” Gordon said. “We wanted people from off the hill to come up here instead of our people leaving town.” 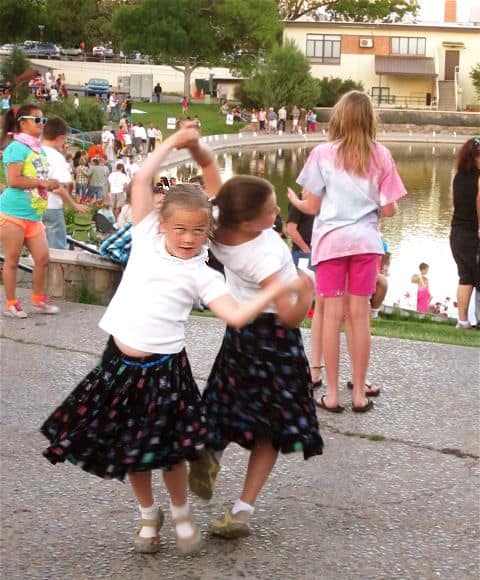 Music from The Police Experience inspired many in the crowd to get up and dance during Friday’s Summer Concert at Ashley Pond. Photo by Katy Korkos

Seven years ago, Gordon closed his store. “I went to the County and told them I needed support. They stepped up and now Los Alamos County is our major sponsor.”

Gordon is as excited about the Concert Series now as he was in the early days. And he’s still having fun, in spite of putting in 70-hour weeks in the summer, he said.

He loves choosing the acts and introducing Los Alamos to new music they may not have heard before.

The concerts range from bluegrass to ska. There’s plenty of variety.

“I’m really happy with the Series,” Gordon said. “We have really good acts all summer long. We’ve had good crowds this year. More than 2,500 people came out to see the Red Elvises. It’s becoming a tradition to have them do a concert every year. Everyone loves them. I just love watching the shows and watching the crowd.”