Community Winds Prism Concert Most Diverse Ever This Saturday 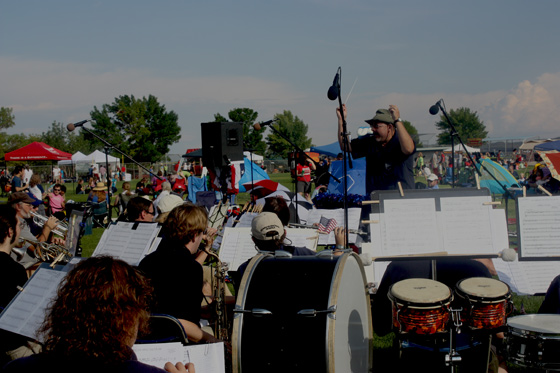 The Los Alamos Community Winds will present the fourth annual Prism Concert for the holidays at 7 p.m. Saturday, Dec. 13 at Crossroads Bible Church in Los Alamos. As with all Winds performances, the concert is free ( $10 donation suggested).

Prism Concerts feature numerous guest performers and are performed “in the round,” with musicians encircling the audience and playing continuously from one piece to the next without breaks.

“The whole idea of this concert is diversity,” Winds Musical and Artistic Director Ted Vives said. “This will be the most unique Prism concert yet.” It will also include the largest number of musicians so far.

The First United Methodist Church of Los Alamos Handbell Choir will be joining the Winds, along with String Theory and Friends, pianists Frances Meier and Cindy Little, tenor Rene LeClaire, a saxophone choir and various combinations of Winds musicians playing in various groupings.

Making the concert even more diverse and unique are Chantal Stieber play a Chinese piece, “Harvest Drum,” on guzheng (Chinese Harp). “It’s something like a combination of a sitar and an autoharp,” Vives said.

Another unusual instrument concertgoers will hear is the theremin, played by Stuart Bloom. He will perform “What Child is This,” as a solo piece. Although you may not know it, you’ve probably heard the theremin in “Good Vibrations” by the Beach Boys or in sci-fi movie scores. It is played by moving one’s hands in the proximity of a rod. “It’s like shaping sound with the hands,” Vives said.

The grand finale, which will bring all the musicians together, will be the concert suite from Polar Express. An Australian group shared the handbell score for the piece with Vives, giving the concert yet another layer of diversity and an international connection.

From traditional carols and popular holiday tunes to movie scores and Chinese melodies, the Winds and friends will celebrate the season with a concert that will warm up the winter night on Saturday.

We look forward to this concert every year,” Vives said.