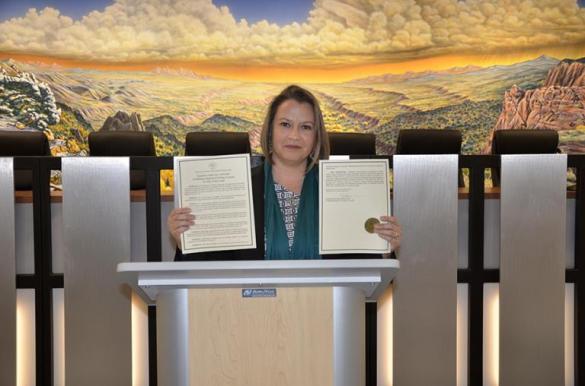 From the State Land Office:

“These are not hunting contests. They are animal cruelty contests,” Garcia Richard stated in her remarks. “It is an inexcusable practice, and today I used my authority to ban organized killing contests of unprotected species on any of the nine million acres of State Trust Land that I am charged with overseeing.

“The position of the State Land Office under my direction is that all wildlife are sacred and all wildlife play a vital role in our environment. This action does not restrict a rancher’s ability to humanely remove or kill an animal causing harm to agriculture or domestic pets on State Trust Lands. What we are addressing is the blood sport where participants kill dozens of animals without sound justification and play for cash and prizes.”

Of the Order, Jessica Johnson, Chief Legislative Officer for Animal Protection Voters said, “Commissioner Garcia Richard has a long history of advocacy and leadership on important wildlife protection and land conservation issues. She has risen to the occasion at every opportunity to be a proud voice of the humane treatment of animals and sound land management. She proved that today by banning inhumane killing contests of unprotected species.”

Today marks Commissioner Garcia Richard’s first Executive Order after assuming office Jan. 1. Just 10 days into her term, Garcia Richard has been hard at work. Aside from today’s Executive Order, she has successfully pushed for the Oil Conservation Commission to rehear an application from a Texas oil company that would allow them to double their drilling presence in the San Juan Basin and has sparked an important conversation on the use of traps and snares on state trust and public lands.