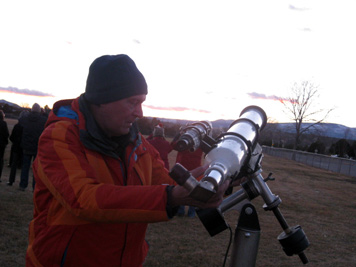 A large group of people lined up on the soccer fields at Overlook Park Sunday night. A telescope was being set up and sets of binoculars were pointed at the horizon. The sun was slipping away and the sky grew darker. The show was about to begin.

The Dark Night series will not officially kick off until April, but Sunday, the Pajarito Astronomers and the Pajarito Environmental Education Center hosted a special event to see the PanStarrs comet. 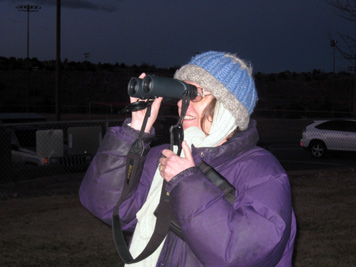 Pajarito Astronomer member Didier Saumon explained that the PanStarrs comet was discovered two years ago in Hawaii. Sunday, the comet was closest to the sun, but it will be visible until June, Saumon said.

The comet may have been the featured attraction, but it wasn’t the only thing being showcased that night. One telescope captured the planet Jupiter and some of its moons.

Shirley and David Clark of Los Alamos were among the group of people who came out to study the night sky.

“I think it is just fascinating,” Shirley said.

The Clarks, who have lived in Los Alamos for 35 years, said they went to the first Dark Night event. Shirley said her husband was especially interested in Sunday’s event, adding that in the past he has been guilty of waking up neighbors while searching for a comet.

Steve Becker, president of the Pajarito Astronomers, is another longtime stargazer.

“I was always interested in the stars when I was kid,” he said.

It’s the same interest that brought so many other residents out to the soccer fields. Most people have never seen a comet in real time, Becker said.

He added that people are drawn to look at the universe because it is so much larger than planet Earth.

Saumon agreed saying, “The universe is an amazing place to be.”

The Pajarito Astronomers are happy to share their equipment, time and knowledge with the community, so everyone can experience what the universe has to offer.

“When you’re passionate about something you want to share it,” Saumon said.

Dark Nights continue through November and are free and open to the public.

“We want to share what we see,” Becker said.