There is no question that Jeannette Wallace was an outstanding woman who represented Los Alamos well at the state legislature for many years.

Wallace was elected 11 times to represent District 43 in the State House. She served 22 years there, which is quite amazing.

Wallace served our citizens several terms on the Los Alamos County Council. She was very active with the schools, Cub Scouts and Girl Scouts and served as a Sunday school teacher and did so much more for our community. 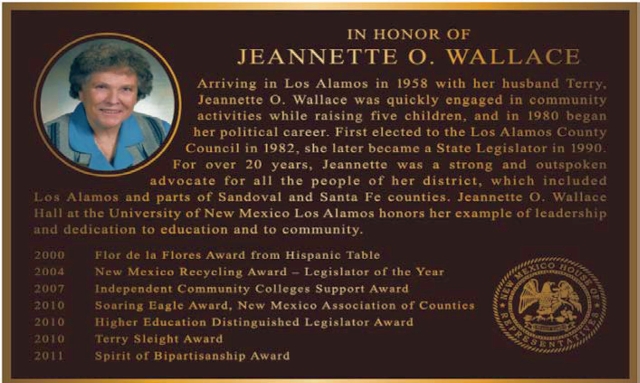 The plaque that now hangs at the “Jeannette O. Wallace” hall on the campus of UNM-Los Alamos. Courtesy/UNM-LA

We should be so lucky in this community to have more “Jeannette O. Wallace’s” emerge and step-up to serve our community the way she did over so many years.

It was wonderful to see that Wallace was honored with the naming of the Jeannette O. Wallace Hall at the UNM-LA campus just recently. I would expect to see many more honors for this outstanding citizen who had a huge impact on what makes Los Alamos great today.

Tonight (Thursday) there will be held the first of two public hearings of the “Committee to Consider a Request to Name the New Municipal Building after State Representative Jeannette Wallace.”

This committee will make a recommendation to the Los Alamos County Council on whether the new Municipal Building should be named in honor of Jeannette Wallace.

The new Municipal Building will be the seat of our local county government. As such, it would be bad form to name the building after a local political figure no matter how revered they might be, this being the house of all our citizens, regardless of party affiliation.

Just as our national capital building is not named after any particular figure, say a Ronald Reagan, John F. Kennedy or even George Washington, neither should our local seat of government. It would be a mistake to do so.

It is clear that public sentiment is heavily against the idea of naming the new building after any person.

The County’s open forum page on this topic shows that of 31 public comments submitted so far, none support the suggested name. Many letters to the editor have indicated they are against this or any naming suggestion.

Most commenters request that our government seat continue to be named simply, the “Los Alamos County Municipal Building” just as before.

I am certain that Los Alamos will honor the memory of this outstanding woman, Jeannette O. Wallace, in other appropriate ways in the future.

Let the memory of this incredible lady inspire more women to rise to positions of leadership in order to continue the legacy of State Representative Wallace and her contributions to the State of New Mexico and Los Alamos County.