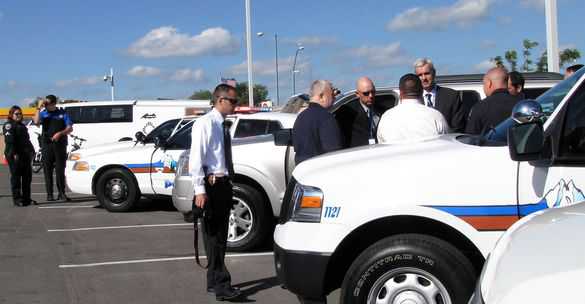 The Los Alamos Police Department set up a static display of its vehicles and equipment for inspection by the state accreditation assessment team in 2010, at which time its administration, operations, personnel and training procedures passed compliance with state standards. Photo by Carol A. Clark/ladailypost.com

The standards required to join the ranks of the Los Alamos County Police Department are stringent when measured against police departments around the country.

“We have such high expectations of our people that applicants who would have been hired elsewhere are not hired to work for the Los Alamos Police Department,” Capt. Randy Foster said. “That’s why we end up with such great people.”

Because the department places such an important focus on professionalization, community policing, education and training, more than half of all Los Alamos police officers hold bachelor’s degrees and four have earned master’s degrees.

The positive impact of a college-educated police force is evident in a broad variety of research including work conducted by Rebecca Paynich, Ph.D.

Her research found that college-educated police officers display clearer thinking, have a better understanding of policing and the criminal justice system and maintain better comprehension of civil rights issues from multiple perspectives.

Paynich’s research also found that college-educated officers themselves report having greater knowledge of the law, are better prepared for court, have a higher quality of performance on the job, have a higher level of problem-solving abilities, are better at resolving conflicts and make better discretionary decisions.

“We are proud of the dedication our officers demonstrate through their commitment to training and educational programs,” Foster said.

Three new recruits have just joined the ranks of the Los Alamos Police Department. Each has a unique connection to the local force.