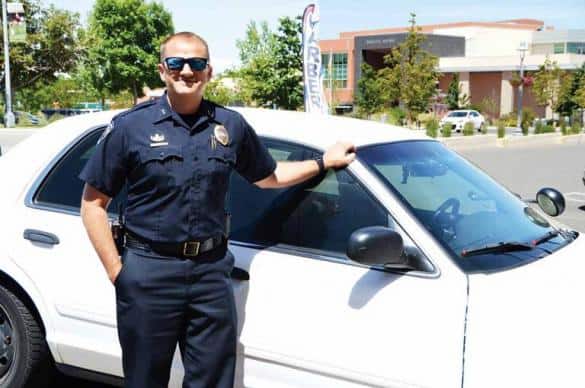 Los Alamos Police Cmdr. Oliver Morris is interviewed at the Los Alamos Daily Post Wednesday about being chosen to attend the FBI National Academy in Quantico, Va. Photo by Carol A. Clark/ladailypost.com

With the critical issues facing the policing profession today, the FBI National Academy is a professional course of study for U.S. and international law enforcement leaders. The program serves to improve the administration of justice in police departments and agencies and raise law enforcement standards, knowledge and cooperation.

“I’m very grateful for this opportunity to go to the national academy … it’s a very prestigious opportunity,” Morris said. “My hope is that I can bring back what I learn to my police department and my community to help make them better.”

Morris, his wife Kateri and LAPD Chief Dino Sgambellone traveled Tuesday to FBI headquarters in Albuquerque for a briefing on what to expect at the national academy. They met two other officers also chosen for the 277th class of the national academy including Lt. Lori Carrillo of the Bernalillo County Sheriff’s Office and Cmdr. Art Sanchez of the Albuquerque Police Department.

“For the last 15 years, I’ve seen Oliver enjoy the best times and endure the worst times of his life being a police officer. He has the heart of a servant and finds his reward in helping others,” Kateri said. “He embraces the challenges that law enforcement presents, and tries to stay informed with community needs, while encouraging others to do the same. Having an opportunity like this, for him, is something he will never take for granted. He is really looking forward to obtaining the knowledge, training, and growth he desires from the FBINA so that he can implement it back home in any way he can. And I’m behind him 100 percent!”

“The FBI National Academy is recognized as a preeminent leadership program,” Sgambellone said. “I am delighted that Cmdr. Morris was selected to attend, and I know it will pay dividends to the department and to the citizens we serve, well into the future.”

Cmdr. Morris told the Los Alamos Daily Post that he wanted to be a police officer ever since he was a young child. The Los Alamos Police Department hired him in 2004 and sent him to the New Mexico Department of Public Safety Academy. He graduated and two years later was promoted to corporal and went on to serve as the School Resource Officer at Los Alamos Middle School. While there, Cmdr. Morris also coached football and track. In 2008 he became a patrol sergeant and the following year a detective sergeant. Morris served in that position for five years before his promotion in 2014 to commander where he remains today.

“I’ve had more opportunities at the Los alamos Police Department than I ever thought possible,” Morris said. “What I love about Los Alamos is its community support for its police officers and first responders and there is no other place I would rather serve.”

Morris holds high praise for his officers saying if it wasn’t for them, he would not be able to take the opportunity to attend the FBI National Academy.

“They are the boots on the ground and the ones who give up time with their families to work nights and weekends,” Morris said.

Morris stresses his belief in community involvement. He serves as service director with the Rotary Club of Los Alamos. He also is immediate past president of the Los Alamos Public Safety Association and since first becoming a police officer has served as chair of the Los Alamos Special Olympics.

“Community policing is very important to me and I encourage my officers to do the same,” Morris said.

While at the FBI National Academy, Morris intends to earn a “Yellow Brick”, which is awarded to those individuals able to complete a 6.1-mile grueling run through a hilly, wooded trail built by the Marines. Along the way, the participants must climb over walls, run through creeks, jump through simulated windows, scale rock faces with ropes, crawl under barbed wire in muddy water, maneuver across a cargo net and much more.

The FBI National Academy was established in the 1930s in response to a national push toward the standardization and professionalization of police departments in the U.S.

There are three pillars to the FBI National Academy:

Academic learning – Before arriving at Quantico, students register online for classes, so they already know which academic courses they’re enrolled in.

The national academy follows a collegiate model, so attendees have core courses they have to take – like physical training and contemporary issues in law enforcement – but the rest of a student’s curriculum is primarily dependent on what they select for themselves.

In addition to the coursework, there is an impressive roster of speakers. Law enforcement and military professionals provide candid briefings regarding high-profile tactical operations and noteworthy major investigations. Other speakers address topics such as officer wellness and resiliency, victimology and other contemporary law enforcement issues. There is no other forum where attendees are afforded the opportunity to see so many valuable presentations in a single setting.

Physical fitness training – The capstone of the fitness program is the “Yellow Brick Road,” a 6.1-mile run through a hilly, wooded trail built by the Marines. Runners climb over walls, wade through creeks and navigate obstacles before completing a road run back to the FBI Academy. Students completing the course are awarded a yellow brick with their session number on it to commemorate the event. The course is known as the “Yellow Brick Road” because it’s marked by yellow stones at various spots along the trail.

Networking – Without question, meeting so many other law enforcement leaders from around the world is the highlight of attending the national academy.