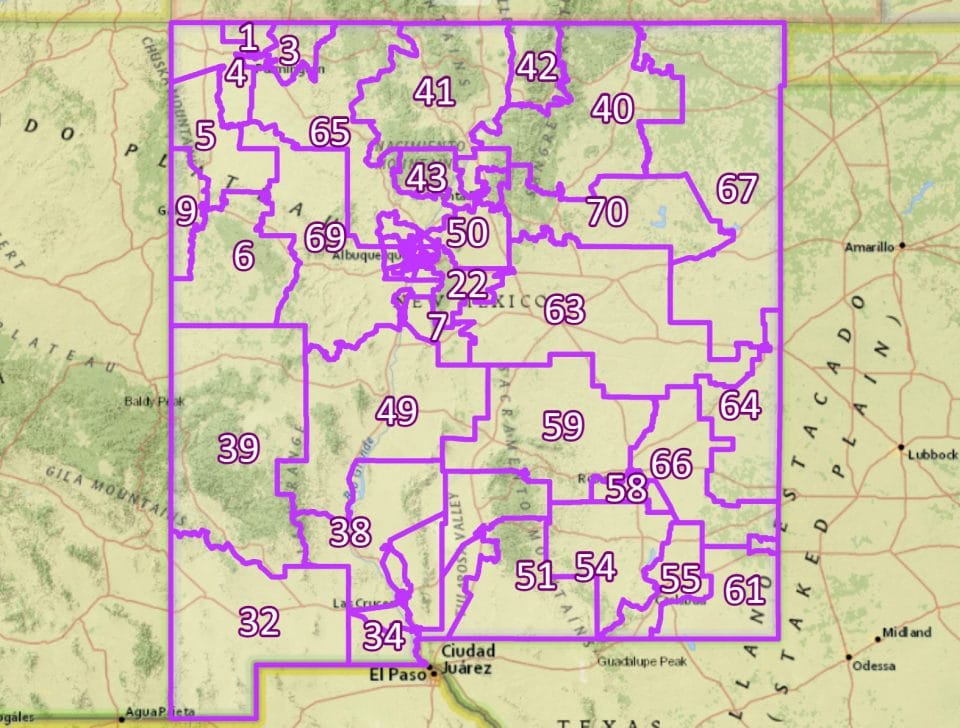 A recommended redistricting map presented before a Committee of the Whole House of Representatives Tuesday by the bipartisan Citizen Redistricting Committee. Courtesy image

SANTA FE — Tuesday, before a Committee of the Whole House of Representatives, the bipartisan Citizen Redistricting Committee (CRC) presented its recommended maps.

In its presentation, it also outlined its fair and transparent process, which included input from over 2,000 New Mexicans from across our state.

Created by Senate Bill 304, which passed with bipartisan support in the 2021 regular session, the independent Citizen Redistricting Committee held more than 20 public meetings in diverse communities throughout New Mexico over the course of two months.

Based on the extensive community feedback received at these meetings, as well as 2020 Census data, the CRC developed updated maps to most accurately reflect the current geographic and cultural diversity of New Mexico.

The proposed House maps presented today, as well as the CRC’s maps for the State Senate, U.S. Congressional, and Public Education Commission districts, all received an “A” grade from the nonpartisan Princeton University Gerrymandering Project and top marks for fairness from other third party evaluators.

The CRC is composed of seven members appointed by leaders from both parties and the State Ethics Commission. For partisan fairness, the committee did not take into consideration partisan data or voter performance data, and in keeping with the mandate of the federal Redistricting Act, relied on race-neutral, traditional redistricting criteria.

“We are so grateful for the diligent work of the Citizen Redistricting Committee, which spent hundreds of hours hearing public input, scouring demographic data, and assessing communities of interest to ensure fair maps that best represent the population and diversity of New Mexico today,” Rep. Daymon Ely (D-Corrales) said. “No map can please everyone, but they can and should be fair. And these CRC maps have passed the highest of standards, not only by evaluation of this bipartisan-created committee but by external experts.”

Rep. Ely continued: “Ultimately, redistricting is about ensuring the health of our democracy and providing proper representation to the voters of New Mexico. Thanks to the hard work of the CRC, we are off to a great start and look forward to discussing their maps further this week.”

The House maps (HB3, HB4, HB5 & HB8) will head next to the House State Government, Elections & Indian Affairs Committee, which is meeting this afternoon, for further evaluation and public comment. The fourth House map (HB8) represents the CRC map incorporating a tribal consensus reached after the CRC completed its work.

The Roundhouse is open to the public for this special session, and proof of full COVID-19 vaccination will be required to enter the building. Virtual public participation also will be available. Members of the public can view floor sessions and committee meetings on the New Mexico legislature’s Webcasts tab, and provide comments via phone or Zoom as directed on the daily schedule.