It is a simple enough story for older elementary kids to follow and visually intriguing enough for adults to be entertained. For some, the last scenes get a bit preachy, but the message is clear: keep dreaming and let hope be your guide.

George Clooney plays a grown up Frank Walker, a boy genius whose story opens the movie. Thomas Robinson plays the 12-year-old Frank, who enters his homemade jet pack in a science contest at the 1964 Worlds Fair in New York.

A girl named Athena (Raffey Cassidy), who seems to be his age and related to the judge (Hugh Laurie), likes Frank’s ingenuity and encourages him to follow her. Going into the It’s a Small World ride (which really was introduced by Disney at the 1964 fair), his boat enters a portal to a place “in the space-time continuum” that could be called “Tomorrowland.” We learn later that Frank spends a good chunk of his life there creating essential bits of technology. 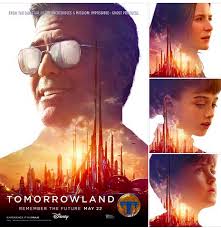 After that 10-minute intro, we are taken to present day Florida where Casey Newton (Britt Robertson) becomes the focus. She’s old enough to drive and smart enough to be clandestinely sabotaging the cranes at Canaveral that have been dismantling the last launch pad. Her father is a NASA engineer who will be out of a job when the disassembling is done. Presumably Casey is buying time for him, or she may be protesting the end of the American space program and part of her dream to go into space herself.

When an enamel pin with a big red “T” on it, supposedly from the 1964 World’s Fair, comes into her life, Casey touches it and glimpses a future world where our technological problems have been solved and imagination has created some intriguing things. During her attempt to find out more about the pin and what she has just experienced, Casey gets picked up by Athena and taken to Frank. The two team up for an adventure of their own, which comes rather late in the movie.

This is a story about not giving up, about using one’s gifts to make the world a better place. It may be too “dark” for little kids, given all the references to how the world might end. On the other hand, the filmmakers quite obviously want to encourage young people to dream big and change the world. …A typical Disney theme.

The film’s color palette, scenes of the 1960s, designs of the costumes and sets, are all great reasons to see it. Although there it is violent at times, robots are the ones getting killed (in some very creative ways). Tomorrowland’s reviews are not great, as it wants to be too many things at once. But it is entertaining and visually intriguing. It is rated PG, but is less scary for kids than a typical superhero movie.