“Philomena” was honored by the Academy of Motion Picture Arts and Sciences with nominations for Best Picture of 2013, Actress in a Leading Role, Original Score and Adapted Screenplay and I heartily agree with these nominations.

It is a fine film, based on a true story. Judy Dench is wonderful in the title role. 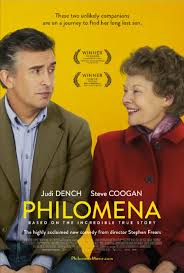 The story puts an aging, faithful, Irish Catholic woman, a retired nurse, who wants to find her son, into the hands of a jaded, self-professed atheistic, famous journalist who is after her story. The two play off each other nicely.  one is sweet, wise and forgiving, the other sharp, worldly and quite angry.

There is a theological conundrum here. what to do with a terrible history of what the Church did to pregnant, unmarried, teenage girls at the hands of nuns tasked with looking after them.

That history is harsh enough. But added to it is the reality of a high ranking GOP insider dying from AIDS after working for the very president that cut AIDS research funds.

Philomena (the real woman was present at the Oscars) is good for the journalist Martin at this point in his career. Her love of life and ability to find the good in things impresses him as simplistic until he sees the power in it. He finds she is no push over.

The dark theme of this movie is shame: institutionalized shame in which the girls lived, long into their later lives, and the shame in which a gay man was forced to live as he died of AIDs, despite having had a successful career, an apparently happy life and a loving partner. Just when you think the film is going to end by condemning the Catholic Church for its atrocities in 1950s Ireland, it makes a turn to allow a simple, elderly woman to express forgiveness. This film is well worth your time.