By CYNTHIA BIDDLECOMB
Los Alamos
“Paul, Apostle of Christ” is the latest release from Affirm Films, Sony’s division for faith-based movies. It comes just in time for the Easter season, but in limited release. 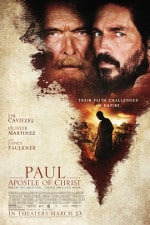 In this period piece set in 67C.E., Luke (the gospel writer) clandestinely finds his way to a group of believers hiding in Rome.
Through their leaders, the married couple Aquila and Priscilla, he is smuggled into the infamous Mameritine Prison to visit his friend, the Apostle Paul.
Visiting Paul regularly, Luke writes down his reminiscences, intending to write a book about Paul’s 30-some-odd-years of adventures in the region, bringing the faith to communities. (We know of Luke’s final product as The Book of Acts, which follows immediately after the four gospels—four tellings of the story of Jesus’ in Christian scripture.) The prison warden, Mauritius (Olivier Martinez), learns of the visits and threatens the successful recording of Paul’s story.
This is an extremely difficult time to be a Christian in Rome. Emperor Nero has blamed the Christians for the fire he ordered set, which burned half the city to the ground. In retaliation, Nero is sending Christians to the lions or burning them as torches in the streets. These people are living in fear of arrest and extermination. Luke, played by Jim Caviezel (Jesus in the Passion of the Christ), is determined in his efforts to get to Paul. James Faulkner (Lord Sinderby in Downton Abbey) plays a rugged, world-weary, and deeply tormented Paul, haunted by his misdeeds earlier in life, but still sought out by the community for the wisdom of his advice. The interplay of Mauritius, Luke and Paul, creates the tension within this film.
In flashbacks we are shown that Paul was once known as Saul of Tarsus, an eminent scholar of Hebrew scripture, born and raised in southern Asia Minor (now Turkey), a Roman citizen of Jewish birth, zealous for the proper reverence of the one true God, and working for the Jerusalem Temple authorities. His love for God’s Law, as revealed in Judaism, led him to an active role as a persecutor of blasphemers, which is how the Jews who followed Jesus were perceived. The very God he thought he was defending brought him low one day, took away his sight and made him see the error in his methodology. In that moment, he came to know Jesus as the Christ, the promised anointed one, and he spent the rest of his life sharing this truth with the world, at much danger to his person.
Mauritius attempts to appease his Roman gods to heal his sick daughter and when this fails, a door is opened for Luke, the Greek physician, to save the girl. Paul’s fate is sealed, however, and his sentence will be carried out at the end of the film, freeing him from the torments he suffers as he recalls every person he ever wronged.
The film is “Rated PG-13 for some violent content and disturbing images”, but is well worth the time of those who want to understand Paul’s impact on the world. For those familiar with Paul’s story, the film puts a new sense of gritty reality on a much beloved story.
Menu
Los Alamos
55°
Fair
6:23am6:07pm MST
Feels like: 54°F
Wind: 6mph SSE
Humidity: 24%
Pressure: 30.19"Hg
UV index: 0
TueWedThu
48/34°F
50/28°F
48/32°F
Weather forecast Los Alamos, New Mexico ▸