By CYNTHIA BIDDLECOMB
Los Alamos
“Isle of Dogs” is a real treat! This animated (stop-motion and puppetry), feature length film delights the senses and kept a smile on this reviewer’s face all the way home. It’s the latest cinematic creation from director Wes Anderson, known for The Fantastic Mr. Fox, The Grand Budapest Hotel, and Moonrise Kingdom. Its wonderful music soundtrack was composed by the Oscar-winning Alexandre Desplat.
Don’t be fooled. Most of the laughs in Isle of Dogs are inspired by subtle, verbal and visual details. The little girl next to me may have wondered at the adults chuckling around her. But the humor was so clever as to keep me in wonderment throughout. Hungering for something delightful to raise your spirits? This may be it.
Regardless of the fact that the manipulative leader of Uni Prefecture in a futuristic Japan is devoted to cats, the cats in this film are not the problem. It’s the politicians, who misuse science for their own ends, who get our wrath. Sure, the presence of cats everywhere makes one think that Hello Kitty has warped their world. But the humans, as usual, are to blame. Cat-lover or not, you gotta feel for the pups. 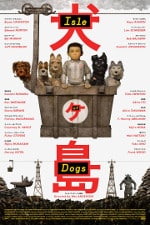 Dogs have been exiled to Trash Island, just off the coast of Megasaki. They are blamed for getting sick and exposing humans to their plague. Here is an island covered in the trash and the worst refuse of the human race, where these once pampered pets must learn to survive on their own. The exiling of the dogs has left some people devastated at the loss of their pets, but none more than twelve-year-old Atari. He lands on the island searching for his beloved dog, Spots, and the self-described “alpha dog” pack end up helping him.
Meanwhile, back in Megasaki, students at the local school pay attention when an American foreign exchange student (Greta Gerwig) shares her conspiracy theory with them.
What happened to the antidote for the dog plague? How did the dogs get sick in the first place? The Manifesto school paper searches for answers, even as the prefect sends his troops to find the boy.
On the island, the alpha dog pack is voiced by Bryan Cranston (Chief), Edward Norton (Rex), Bob Balaban (King), Bill Murray (Boss) and Jeff Goldblum (Duke), with a love interest voiced by Scarlett Johansson (Nutmeg). In an interesting twist, the humans—all but the American and the translators—speak in Japanese throughout the film. The dogs speak English. Is that why their masters don’t understand them? Visually, the film is rich with Japanese culture and images.
Isle of Dogs is “Rated PG-13 for thematic elements and some violent images.” Young children won’t get most of the humor and some images may disturb them. However, this movie delighted me with its originality and sweet emotion. You won’t have seen anything quite like it. So give it a chance. You won’t be sorry.
Menu
Los Alamos
27°
Fair
7:11am5:22pm MST
Feels like: 19°F
Wind: 6mph NNW
Humidity: 63%
Pressure: 30.26"Hg
UV index: 0
SunMonTue
45/27°F
46/25°F
43/21°F
Weather forecast Los Alamos, New Mexico ▸