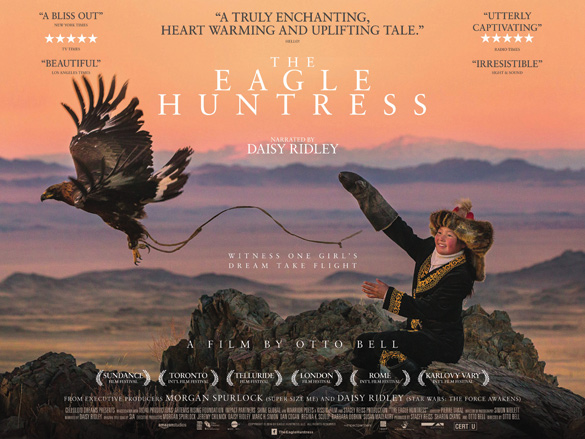 “Eagle Huntress” is a documentary that tells the story of Aisholpan Nurgaiv, a 13-year-old Mongolian girl who wants to be an eagle hunter like her father and the eleven generations of men before him. The problem is, she is female.

Aisholpan Nurgaiv plays herself in the film, and this is her true story. Her father, Rys Nurgaiv, and his father have been eagle hunting all of Aisholpan’s life. She is really keen to be trained, herself. Her father thinks boys and girls are equal and can do anything. Her mother wants Aisholpan to make choices that will give her a happy life. And Aisholpan, herself, believes anyone can do anything if they try hard enough.

The setting is the Altai Mountains, where Russia, Mongolia and Kazahkstan all come together. The family lives in a ger (a yurt) during the warmer months of the year and in a house in the winter. Other than a few modern pots and pans, clothing, transistor radio and an old crank truck used for the moving season, the Nurgaivs live as their people always have.

The older children pitch in with the adults, caring for the cattle and ponies. The eagles are trained to hunt large prey like foxes and rabbits, which the family will use for furs and food. After seven years serving the human, the eagle is released to live the rest of its days in the wild.

To train an eagle, one must catch an eaglet, just days before it leaves the nest. Aisholpan’s father takes her out to the rocky outcrop they have been watching with binoculars, where there is an eagle’s nest. Using ropes from the rocks above, Aisholpan fearlessly climbs down to the nest while her father lets out enough rope. The scene is a bit harrowing, and the mother eagle is none too happy, flying above.

The Nurgaiv children go to school in a town many miles away. On Fridays they go home for the weekend and help with chores. At home, the national radio service gives the weather report and notes how long it is until the Eagle Festival. Will Aisholpan be ready to compete as an eagle hunter?

The elders are not so keen on a girl being trained. But all she needs to do is prove her abilities. Actually hunting with the eagle will be the real test. Fortunately, the eaglet is willing to do her part.

This is a lovely film about a strong girl and her supportive parents. It is filmed in a part of the world unfamiliar to all but the fortunate tourist or expatriate living there. The people are culturally Muslim, but willing to let a girl break into a man’s world. Their region gets brutally cold in winter, yet these are traditionally nomadic people living in truly beautiful and open scenery. And the Golden Eagles are amazing, too.

Here is a “G” rated film anyone can enjoy. Anyone, that is, who can read subtitles quickly, since the Mongolians speak Kazakh. The narrator helps out in English occasionally, in order to set the stage.

We find we can relate to this foreign culture through the simple desire of young Aisholpan to do something she feels called to do.