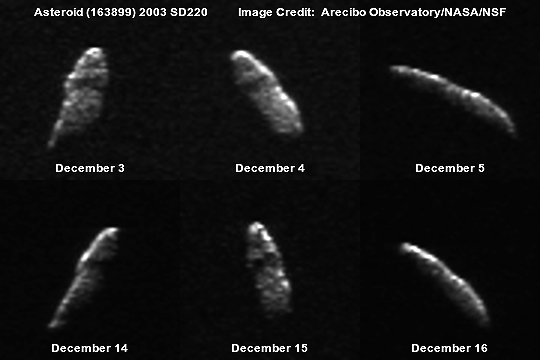 Resembling a sweet potato, which is quite appropriate for the holiday season, a Delay-Doppler image of asteroid 2003 SD220,  the ‘Christmas Eve asteroid’ as observed Dec. 3-5 and Dec. 14-15 from the Arecibo Observatory in Puerto Rico using the NASA-funded planetary radar system. The asteroid will be 28 times farther away than our moon, measures more than 1.25 miles long and rotates very slowly, taking more than 11 days to complete one full rotation. Courtesy/Arecibo Observatory 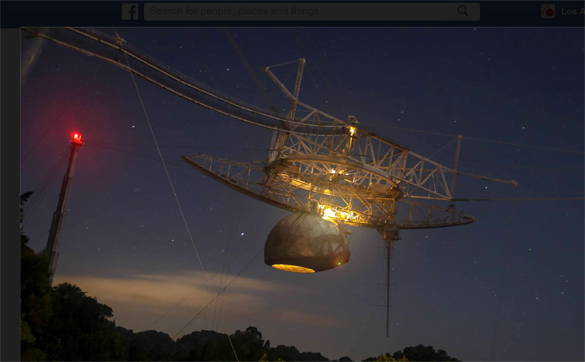 During the month of December, the Planetary Radar Group at Arecibo Observatory has observed near-Earth asteroid (NEA) 2003 SD220, which will have its closest approach to Earth Dec. 24.

Although designated as “potentially hazardous,” this asteroid will be 28 times further away than our Moon and therefore poses no present danger to Earth. There is neither chance of impact nor any other effects due to its flyby despite unfounded predictions from online media.

The NASA-funded planetary radar system at Arecibo measured 2003 SD220 to be very elongated and more than 2 km (1.25 miles) long. It also rotates very slowly, taking more than 11 days to complete one full rotation.

“After several days of radar observations, we find the asteroid to resemble a sweet potato, or batata, which is quite appropriate for the holiday season,” said Dr. Edgard Rivera-Valentin, Staff Planetary Scientist of the Universities Space Research Association (USRA) at Arecibo Observatory, who led the observing campaign in Puerto Rico.

“Because it comes close to Earth it is of interest to NASA as a possible future robotic or human mission target,” said Dr. Patrick Taylor, Group Lead for USRA for Planetary Radar at Arecibo Observatory. Asteroids are considered possible leftovers from the formation of the Solar System and thus are objects of interest for future NASA missions, which will search for clues about the conditions present when the planets formed.

The NASA Jet Propulsion Laboratory’s Goldstone Solar System Radar and the National Radio Astronomy Observatory’s Green Bank Telescope and Very Long Baseline Array also conducted observations of 2003 SD220. Data from all of these observations are used to determine the asteroid’s shape, rotation, and surface properties as well as allow for refinement of the asteroid’s orbit, which can be used to better assess its impact hazard.

This year’s close approach is the first of five predicted encounters between Earth and 2003 SD220 in the next twelve years. High-precision measurements now will help better prepare for future passes. “One of the main directives of Arecibo Observatory is to measure with high precision the distance to asteroids and their speed, which can be used to study the asteroid’s orbit and predict its motion for hundreds of years,” pointed out Linda Ford, a Project Specialist and Data Analyst who participated in observations of the asteroid.

“Our measurements also allow for high-resolution images surpassed only by dedicated space missions sent to specific objects. The difference is our work is much more cost efficient and can survey hundreds more asteroids,” added Dr. Taylor.

Located in Puerto Rico, the Arecibo Observatory is home to the largest and most sensitive single dish radio telescope in the world. The Arecibo Observatory is operated by SRI International in partnership with Ana G. Méndez University System-Universidad Metropolitana and USRA under a cooperative agreement with the NSF. The Arecibo Planetary Radar program is supported by NASA’s Near Earth Object Observation program.