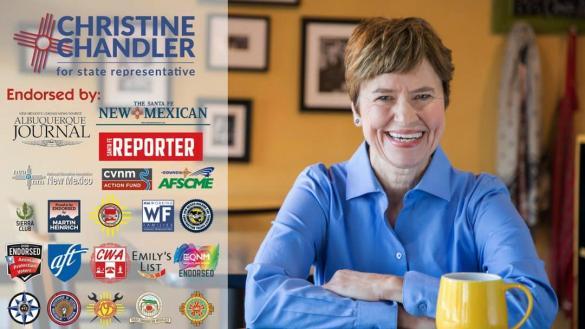 Democrat Christine Chandler from Los Alamos has been endorsed by all three papers participating in legislative endorsements this election cycle for House District 43.

Along with more than 20 other organizations, the Albuquerque Journal, the Santa Fe New Mexican and the Santa Fe Reporter all weighed in and made Chandler their pick for this swing seat representing Los Alamos, Rio Arriba, Santa Fe,and Sandoval counties.

All three papers touted Chandler’s experience as the main reason for their endorsement. One mentioned the lack of experience and deceptive campaign mailers of her opponent as part of the reasoning behind their decision.

Of her endorsements Chandler said, “I’m grateful to all three publications for my endorsements. It’s heartening my long experience and advocacy on behalf of Los Alamos residents was recognized. If elected, I will rely on my experience as an attorney and in public service, as well as drawn upon my many conversations with constituents on the campaign trail at the legislature. This will be a banner year at the roundhouse where new policies that can set New Mexico on the right path will be introduced.”

Chandler, retired after years as an in-house lawyer at the Los Alamos lab, has experience as a County Councilor, and on important boards in and out of local government. She also has served a useful apprenticeship as a legislative analyst for the Senate Judiciary Committee, which works on drafting and evaluating the legality of bills at the Legislature.

Chandler is an attorney who understands the importance of water rights in keeping acequias running, promising to support legislation to stop the easy transfer of these important rights without allowing community input. She will be a strong voice for early childhood education, better approaches to public safety than simply locking people up and protecting our public lands and wilderness areas.

We wrote then [in the primary] about her “active listening,” and this is just one example of how that’s playing out. An attorney and a well-respected member of the Los Alamos County Council, she will carry her thoughtful and measured approach to the Roundhouse. She’s already spent four sessions there working as an analyst for the Senate Judiciary Committee.

Of Christine’s opponent, the Reporter said:

She doesn’t have a record of public service to speak of, except for advocacy against a Los Alamos parks bond proposal and as a delegate at the Republican National Convention in Cleveland who made a speech in favor of Donald Trump. She made a mock newspaper as a direct mail advertisement that was so close to the appearance of the masthead of the Los Alamos Daily Post that the paper’s editor had to issue a disclaimer. Talk about fake news.

Councilor Christine Chandler has lived in Los Alamos for more than 25 years, and has a long history of public service starting at age 19 serving on her local school board. She worked for 27 years and as an attorney and group leader for Los Alamos National Laboratory and retired to private practice. She has served on various foundation boards, and important public committees as well as Los Alamos County Probate Judge and two terms on Los Alamos County Council. She also has served in the New Mexico State Legislature as a Senate Judiciary Analyst for the last four years.