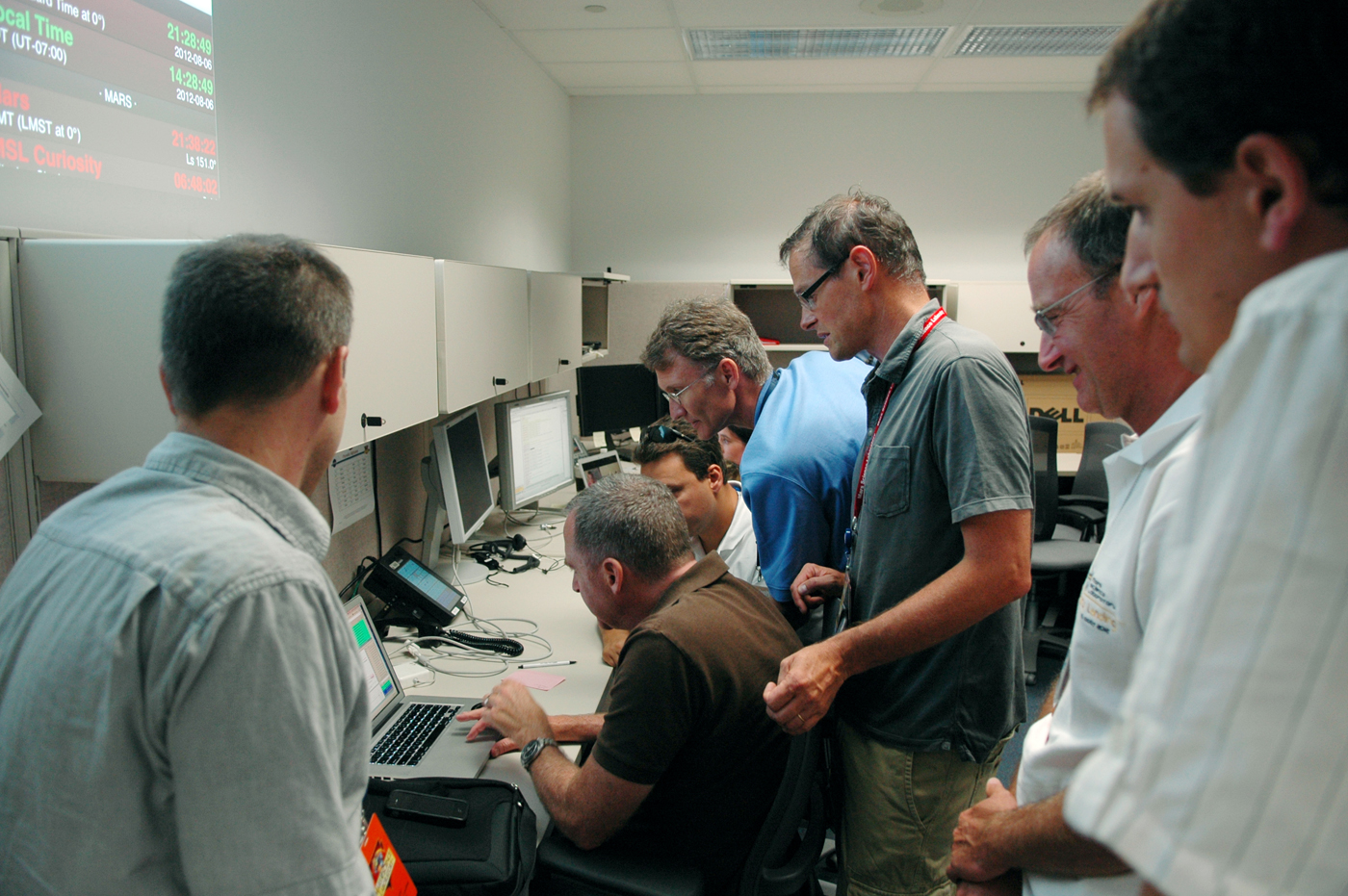 Researchers from LANL and the French Space Agency examine data from the Mars Science Laboratory Curiosity rover from inside the ChemCam Operations Center at NASA’s Jet Propulsion Laboratory on Monday, Aug. 6., less than a day after the rover landed on Mars. The ChemCam team received signals indicating that the instrument is healthy and all systems are ready to go. Photo Credit: Los Alamos National Laboratory/James E. Rickman

Members of the Mars Science Laboratory Curiosity rover ChemCam team got a digital thumbs up about the operational readiness of their instrument just hours after the rover landed on Martian soil late Sunday evening.

Los Alamos National Laboratory planetary scientist Roger Wiens, Principal Investigator of the ChemCam Team, confirmed that the instrument sent word to its handlers on Earth that it was alive and healthy.

“Following the fantastic landing of Curiosity on Mars, ChemCam proceeded with an aliveness test within an hour of landing,” Wiens announced. “This was essentially the same routine as performed five months earlier in the middle of its cruise (to Mars). All systems are go!”

The aliveness check means that, as far as the international team of scientists is concerned, ChemCam can begin its next task of transmitting photographic images of the rover as a system check.

The ChemCam instrument combines a high-resolution camera powerful enough to view a human hair from seven feet away with a high-power laser that can zap rocks from a distance of as much as 23 feet to determine their composition.

If everything goes according to plan, ChemCam could fire its first laser pulses at a Martian rock on Sol 10 or 11 (Aug. 18 or 19.)

Because Curiosity’s mission is scheduled to last an entire Martian year, or 98 Earth weeks, the MSL science team—comprised of members from each of the rover’s 10 instruments—is proceeding slowly at first to ensure that the vehicle is ready and able to make its slow road trip on a geological sightseeing trip through Gale crater and the slopes of Mount Sharp.

The rover seems to have landed in a good spot within the crater, Wiens said.

“The idea is that the gravel we’re seeing is alluvium coming down from the rim of the crater,” he said. “The alluvium from the rim is potentially more ancient than Mount Sharp,” which some have suggested holds a billion years or more of Martian geological history within its strata.

Some members of the ChemCam team see the alluvial pebbles as a unique, drive-by study opportunity. Los Alamos post-doctoral researcher Nina Lanza has previously studied rock varnish on Earth rocks. The dark varnish appears on rocks in arid locations like the desert southwest.

The weathered coating, while extremely thin, may provide clues about whether Mars once harbored ancient life.

“Rock varnish on Earth is not clearly understood,” Lanza said. “It’s not yet certain whether a biological component is necessary for its formation.”

The ability to study extraterrestrial rock varnish, if no indications of bacterial life are present on Mars, could help scientists better understand terrestrial processes by which these varnishes form on rock, or varnishes could serve as a possible confirmatory test that life was once present at locations beyond Earth and Mars.

ChemCam’s tiny bursts of laser energy can gently vaporize the coating bits at a time until it reaches the pristine rock below.

The data from ChemCam’s laser and spectrometer can probe the makeup of rock varnish, or indicate to researchers whether the varnish is contaminated with layers of material from other weather-related geological processes.

“ChemCam is the perfect instrument to see these types of subtle chemistry changes through the surface of rocks,” Lanza said.

Throughout the Curiosity rover’s mission, ChemCam has the ability to sample thousands of locations on Mars.

The instrument is a collaboration between research organizations within the United States and France.

More than 45 LANL scientists, students and other personnel comprise the entire ChemCam team.