Image of calibration target on the back of the Mars Science Laboratory mission Curiosity rover taken by the rover’s ChemCam instrument. Courtesy NASA/JPL

Members of the Mars Science Laboratory Curiosity rover ChemCam team have received the first photos from the instrument’s remote micro imager. The successful capture of ChemCam’s first 10 photos sets the stage for the first test bursts of the instrument’s rock-zapping laser in the near future.

“The successful delivery of these photos means we can begin efforts in earnest for the first images of Mars rocks by the ChemCam instrument and the first use of the instrument’s laser,” said Los Alamos National Laboratory planetary scientist Roger Wiens, Principal Investigator of the ChemCam Team. “We anticipate these next steps over the weekend.” 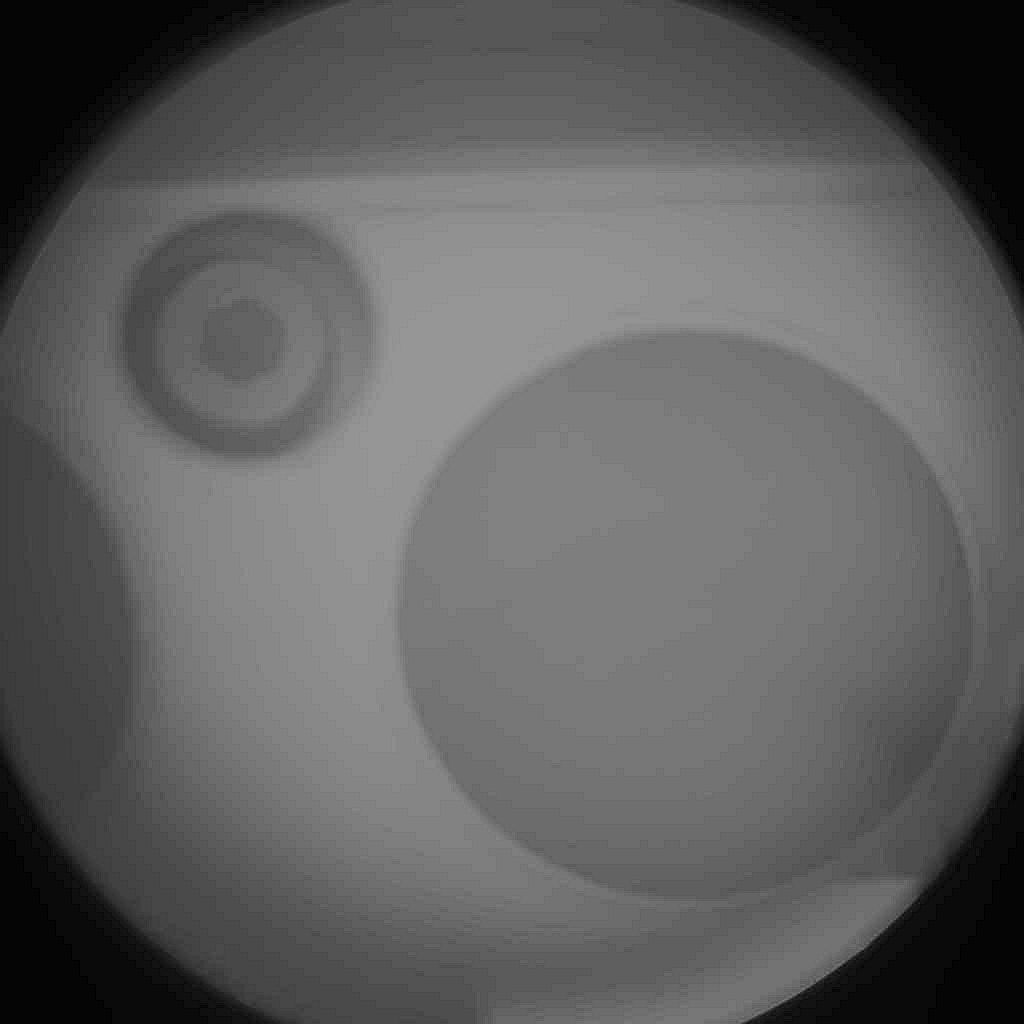 The next tasks for ChemCam—the inaugural laser burst and spectral reading—will help scientists determine the integrity of the ChemCam system and the pointing capability of the rover’s mast, which supports ChemCam’s laser and telescope. Scientists and engineers from NASA’s Curiosity rover mission have selected ChemCam’s first target, a three-inch rock designated N-165 located near the rover.

“Rock N-165 looks like your typical Mars rock, about three inches (seven centimeters) wide and it’s about 10 feet away,” Wiens said. “We are going to hit it with 14 milliJoules of energy 30 times in 10 seconds. It is not only going to be an excellent test of our system, but it should be pretty cool too.”

The ChemCam system is one of 10 instruments mounted on the MSL mission’s Curiosity rover—a six-wheeled mobile laboratory that will roam more than 12 miles of the planet’s surface during the course of one Martian year (98 Earth weeks).

When ChemCam fires its extremely powerful laser pulse, it briefly focuses the energy of a million light bulbs onto an area the size of a pinhead. The laser blast vaporizes a small amount of its target up to seven meters (23 feet) away.

The resultant flash of glowing plasma is viewed by the system’s 4.3-inch aperture telescope, which sends the light down an optical fiber to a spectrometer located in the body of the rover.

There the colors of the light from the flash are recorded, enabling scientists to determine the elemental composition of the vaporized material. ChemCam also has a high-resolution camera that provides close-up images of an analyzed location. It can image a human hair from seven feet away.

The ChemCam system is designed to capture as many as 14,000 observations throughout the mission.

The laser, telescope, and camera were provided by the French space agency, CNES, while the spectrometers, electronics, and software were built at Los Alamos National Laboratory, which leads the investigation. The spectrometers were developed with the aid of Ocean Optics, Incorporated, and Jet Propulsion Laboratory assisted with various aspects of development.