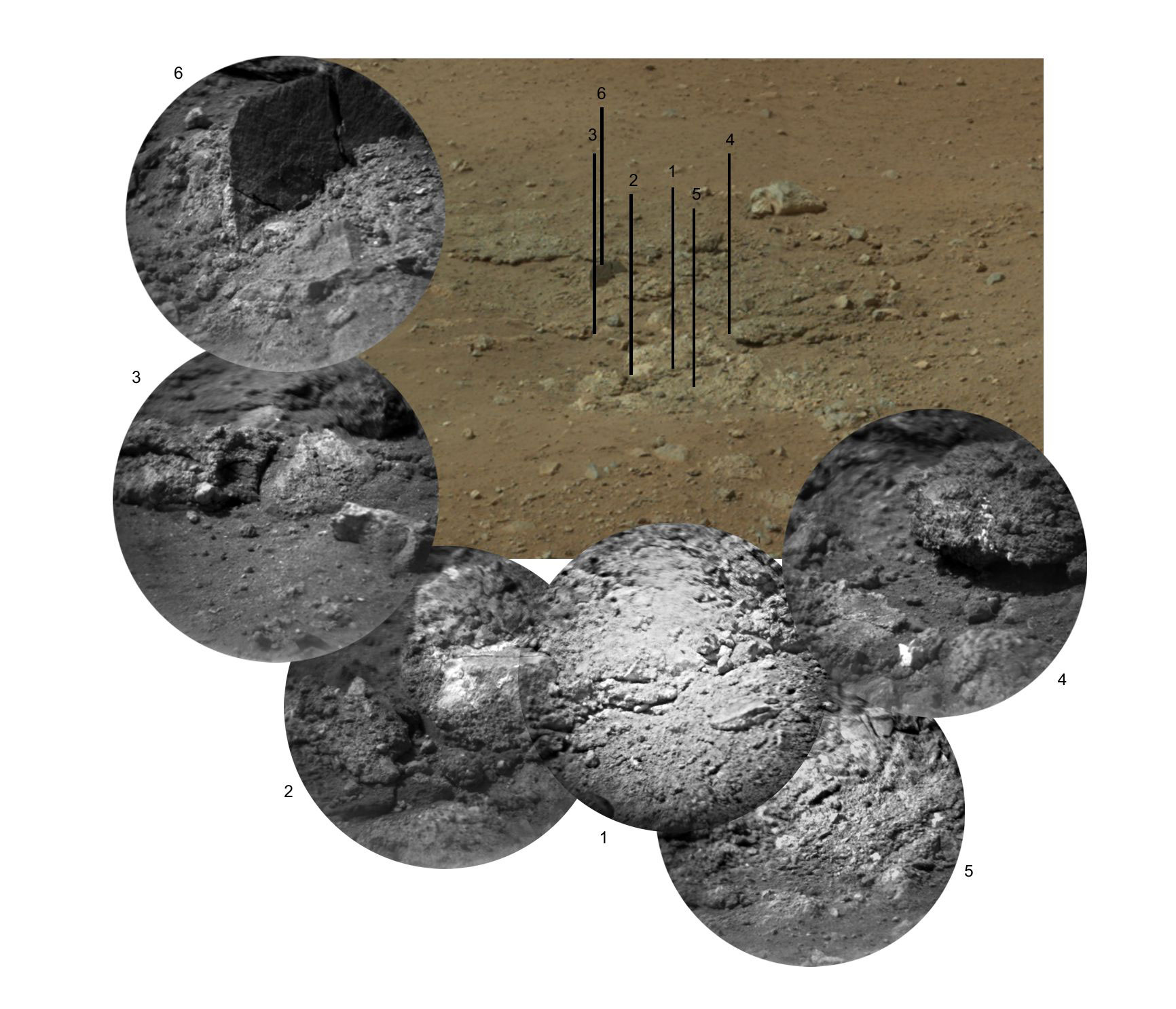 This photo mosaic shows the scour mark, dubbed Goulburn, left by the thrusters on the sky crane that helped lower NASA’s Curiosity rover to the Red Planet. It is located 16 to 20 feet (5 to 6 meters) to the left of the rover’s landing position. The sky crane appears to have uncovered an outcrop of loosely consolidated rocks during the rover’s landing. The mosaic consists of six images from the remote micro-imager (RMI) on the Chemistry and Camera (ChemCam) instrument, shown around an image from the Mast Camera for context. Each RMI image has a field of view of 4 to 5 inches (10 to 12 centimeters) across and shows details as small as 0.02 to 0.03 inches (0.5 to 0.6 millimeters). ChemCam’s laser was used to analyze material at the centers of panels 2, 3 and 4. Courtesy NASA/JPL

Much to the delight of the scientific team, the laser instrument has fired nearly 500 shots so far that have produced strong, clear data about the composition of the Martian surface.

“The spectrum we have received back from Curiosity is as good as anything we looked at on Earth,” said LANL planetary scientist Roger Wiens, Principal Investigator of the ChemCam Team. “The entire MSL team was very excited about this and we popped a little champagne.”

When ChemCam fires its extremely powerful laser pulse, it briefly focuses the energy of a million light bulbs onto an area the size of a pinhead.

The laser blast vaporizes a small amount of its target up to seven meters (23 feet) away. The resultant flash of glowing plasma is viewed by the system’s 4.3-inch aperture telescope, which sends the light down an optical fiber to a spectrometer located in the body of the rover.

There, the colors of light from the flash are recorded and then sent to Earth, enabling scientists to determine the elemental composition of the vaporized material.

Scientists tested the system on Earth in a chamber that simulated the Martian atmosphere. Some of the initial spectral data from Mars look similar to some of the terrestrial standards at first glance. In the coming weeks, ChemCam researchers will pore over the data to look for tiny variations among the peaks and valleys within spectral data captured on Earth and on Mars.

These comparisons will allow the team to fine tune and calibrate the instrument, ensuring that every spectral signature gathered by the rover is accurate.

Each element on the Periodic Table has a unique spectral signature. ChemCam scientists will be able to use these spectral fingerprints to decipher the composition of Martian geology, including information about whether Mars rocks ever existed in a watery environment or underwent changes due to interactions with biological organisms.

With regard to Coronation rock (the rock formerly known as N-165), ChemCam’s inaugural target, “at first glance it appears consistent with a basaltic composition,” Wiens said.

“What’s more interesting, however, is whether the rock had dust on it or some other kind of surface coating,” he said. “ChemCam saw peaks of hydrogen and magnesium during the first shots that we didn’t see in subsequent firings. This could mean the rock surface was coated with dust or some other material.”

With Coronation’s analyses complete, the science team had a chance to pick new targets.

“After Coronation, we got to shoot at a group of ugly-looking rocks in the area named ‘Goulburn,’” Wiens said. “That is one of the areas near the rover that was blasted by the thrusters of the landing vehicle, but these rocks were much farther away from the rover than Coronation, providing a bit more of a test for the ChemCam’s laser.”

The ChemCam system is one of 10 instruments mounted on the MSL mission’s Curiosity rover—a six-wheeled mobile laboratory that will roam more than 12 miles of the planet’s surface during the course of one Martian year (98 Earth weeks). The system is designed to capture as many as 14,000 observations throughout the mission.

“We are just jubilant,” Wiens said. “This mission is absolutely amazing. Everything is working so well. The same applies to our instrument.”

ChemCam’s laser, telescope, and camera were provided by the French space agency, CNES, while the spectrometers, electronics, and software were built at Los Alamos National Laboratory, which leads the investigation.

The spectrometers were developed with the aid of Ocean Optics, Incorporated, and Jet Propulsion Laboratory assisted with various aspects of development.

The Curiosity science team plans next to take the rover out for a short spin to test out other systems. As the mission progresses, researchers will study the Martian environment in the vicinity of Mount Sharp, a towering peak with a summit nearly three miles above the rover.

Mount Sharp appears to contain layers of sedimentary history dating back several billion years. These layers are like pages of a book that could teach researchers much about the geological history of the planet, including whether the Martian environment ever was, or ever may be, suitable for life as we know it.

For more information about the mission, visit: http://mars.jpl.nasa.gov/msl/

This is the first laser spectrum from the Chemistry and Camera (ChemCam) instrument on NASA’s Curiosity rover, sent back from Mars Aug. 19. The plot shows emission lines from different elements present in the target, a rock near the rover’s landing site dubbed “Coronation” (see inset). ChemCam’s detectors observe light in the ultraviolet (UV), violet, visible and near-infrared ranges using three spectrometers, covering wavelengths from 240 to 850 nanometers. The light is produced when ChemCam’s laser pulse strikes a target, generating ionized gases in the form of plasma, which is then analyzed by the spectrometers and their detectors for the presence of specific elements. The detectors can collect up to 16,000 counts produced by the light in any of its 6,144 channels for each laser shot. The plot is a composite of spectra taken over 30 laser shots at a single 0.016-inch (0.4-millimeter) diameter spot on the target. An inset on the left shows detail for the minor elements titanium and manganese in the 398-to-404-nanometer range. An inset at the right shows the hydrogen and carbon peaks. The carbon peak was from the carbon dioxide in Mars’ air. The hydrogen peak was only present on the first laser shot, indicating that the element was only on the very surface of the rock. Magnesium was also slightly enriched on the surface. The heights of the peaks do not directly indicate the relative abundances of the elements in the rock, as some emission lines are more easily excited than others.
A preliminarily analysis indicates the spectrum is consistent with basalt, a type of volcanic rock, which is known from previous missions to be abundant on Mars. Coronation is about three inches (7.6 centimeters) across, and located about 5 feet (1.5 meters) from the rover and about nine feet (2.7 meters) from ChemCam on the mast. Courtesy NASA/JPL/LANL/IRAP