Chapman: On Survivorship Of New Businesses In Los Alamos, With Notes On Signage And Inspections 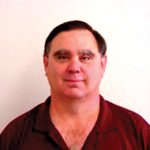 This is the second of an anticipated group of columns applying quantitative methods to the problems of economics and life here in Los Alamos County. I figured that, perhaps, at least here in brain-land we might do some County self-examination using analytical methods that can give us insight into the source of our problems and, perhaps, suggest solutions.

The first column with a nice comment later by George Chandler discussed the complexities and consequences of changing zoning philosophies related to our neighborhoods.

This column is more a direct analysis on why it is so difficult for small businesses to make it here.

When Linda and I first moved here, I spent a lot of time in Santa Fe at an entrepreneur’s space called the Santa Fe Complex (now extinct). I networked a lot and multiple times a month someone would say to me “Why is Los Alamos so hostile to business?” I had no idea whether it was or not, but I saw this as the greatly predominant opinion down the Hill.

Lately, after still hearing this, it has gotten me to wonder whether our County is indeed hostile, or whether it is just very difficult to start a business up here – not that it is a piece of cake anywhere, really – or both. I decided to approach answering this question in the way the scientist in me usually does: I did a visualization of the problem. The results gave me a lot of insight into the “adventure” of starting a local business, and where the key vulnerabilities are in the system.

So, here is the visual model: 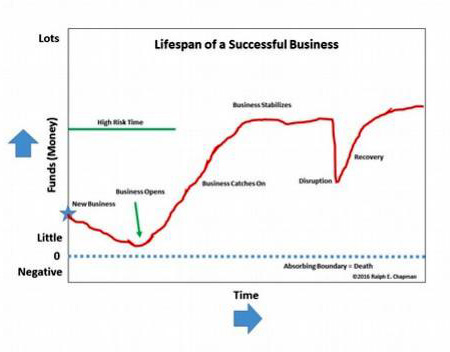 This may seem complex, but it is really relatively simple. The horizontal axis is simply time running from left (earlier) to right (later). The vertical axis is how much money the new business has available; the more, the better, usually.The curve tracks, let’s say, weekly available revenues for the business.[If this were a scientific discussion we would be discussing stochastic processes, Markov chains, etc. but we can keep this simple and non-jargony].

A few things should be noted. First is what we call an absorbing boundary – the hatched line – that signifies $0.00 available, usually the end of the business. It is called an absorbing boundary because, once it gets hit, there is no bounce back up; no recovery (i.e., death of the new business).

The star signifies the starting position of the new business and note that it is rather close to the absorbing boundary; most businesses start with relatively little money. [Few people have relatives that can give them a “small loan of a million dollars to get started.”]In general, the higher up the vertical axis, typically, the better the chance to succeed in the long run.

As noted in the figure, businesses typically are at their most vulnerable at the start. This is because it is very easy for various factors, many random and beyond the control of the owner, to drive them down to the absorbing boundary. The more funds you have, the greater the buffer against these random factors.

Also note that the business hemorrhages money until it finally opens, all spending with no income. No wonder a new business is so vulnerable.

This figure is for a successful business. You see the bad opening period as the curve moves towards the absorbing boundary but, after opening for business, it catches on and moves to more profitable territory.

Later, there can be perturbations of various types that can drop the curve back towards the absorbing boundary (let’s say they do major road work right in front of the store and people need to work hard just to get in the door, as an example). Often, there is a recovery back up, but, also commonly, the perturbation can lead to too much of a dip and the business is beyond recovery.

What happens when things go bad from the start? See the second figure below: 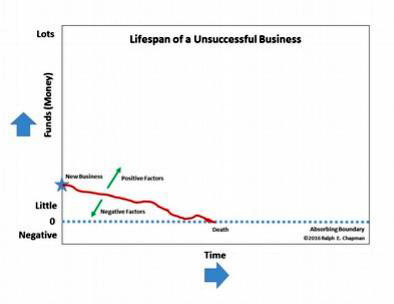 The business here just never caught on. I have included two green arrows showing the key area. The bigger(the steeper) the negative slope of the line, the more inevitable the death of the business.

Positive factors can make the initial slope more shallow and give the business more time to get established and move towards profitable stability. Negative factors push the business to a more rapid death at the boundary.

What are positive and negative factors? These vary with the business. For example, if foot traffic is essential, anything that brings more feet around the business should improve things. Anything that impedes that will push the curve down towards death.

So, from the visualization, we know the battleground is early on at the start of a new business, the most vulnerable time. There is a lot that new business owners can do on their end to optimize the chances of being successful, and there are many resources around to assist in this. If there are still gaps in these resources, let’s find them and fill them.

[As an aside: How do I know this type of visualization? We use something like it often in evolutionary paleontology. For example, if instead of money, the vertical axis is for numbers of individuals, you can track the life history of a species. Run out of individuals, you go extinct. In reality, it is a little fuzzier than that; you can have a million males, but if the females are gone you are, in effect, dead. If there are only females, it may not be this dire; some species are parthenogenetic, they have all females and reproduce asexually (offspring are clones). One of the very long-tailed, striped lizards we see here in Los Alamos (not the blue-tailed one) is this way (Cnemidophorusneomexicanus). Species are also most vulnerable when new as their population numbers tend to be very low and they dwell near the absorbing boundary.]

Back to businesses, now. But what about the County itself?

Being New in Los Alamos:

There are lots of factors that exist in the County that are now having and can have a big effect on the success of new businesses – they contribute to the size of the green arrows in the second figure, both positive and negative. Some can be fixed quickly, some cannot. I’ll talk about a few of these.

Our small population base is a negative within this context. It is probably currently below the threshold to allow a lot of businesses to succeed. This is the justification for wanting to get the County to a higher threshold population of 20,000+, up a couple thousand. It’ll take a while but it is doable and, I believe, it is important to do so, while still keeping the flavor of the community.

Tourist levels are moderate and this is neutral to negative. The new National Park could improve this considerably and make it a positive, if we take steps to make it work. We should. Short-term. The actions already taken to have festivals and other reasons to come here periodically are a positive. Let’s do more and better ones (not at all intended as a criticism of our current ones, just that they can get more funding and support and do even better). The upgrades to Ashley Pond are a big plus in this context. We also have people working insanely hard on making this happen.

The state of business-relevant space and reasonable monthly leases for businesses is totally chaotic. I have no idea if it is fixable, or if some landlords will continue to wait for the Deus ex Machina that probably will never come back to change their philosophy of how much to charge and when it makes sense to leave properties unfilled. So I don’t knowthe answer, but a higher occupancy of businesses is probably much better than what we have now.

I do think, given the reputation, that an important key for the County is to make a change tosome of its basic approaches with new businesses, especially at their earliest phases of setting up.

I hear a lot about the long turnover time for inspections, although I have no personal data on this and am not sure if it is true. These inspections, typically, would be done in that hyper-critical time before a business opens. Here, even a week later than optimal can push the curve way towards the absorbing boundary and make a business untenable in the long run. The County needs to sit down and make sure that new businesses get inspections right away. Period. I mean it. No excuses. Saving money on inspectors makes no sense if you end up losing the money you would get in GRT and money turnover within the County. It can also come across as very anti-business.

Then there is signage. The longest year of my life was the hour-long discussion I heard at a County Council meeting about the minutiae of business signs while waiting on a different agenda item. I have heard that it takes a long time to get an OK on proposed signs. If true, it also is a business killer. If true, it is bad and long past time to fix it.If a long turnover is true, the County needs to stop being penny-wise and pound foolish.

I understand the need to make sure business signage is safe for our community. However, I have no idea why we seem to have a need for very consistent and controlled signs in our community. Go to any community that is currently growing and thriving and you’ll typically see a real variation in signage – each sign fits each business in size, color and font. Character is not a flaw in a business.

Because it seems to come across as anti-business, Los Alamos County needs to be seen to swing the other way towards being more business-friendly. I would suggest the County startby making a position that serves as a concierge for new businesses. This person would walk the new owners through the process and make sure those aspects that can be controlled, are controlled, and that new businesses, especially in their most vulnerable time, get what they need quickly so they can open up and stop the rapid descent towards the absorbing boundary. The concierge must have authority to make things happen. The position will quickly pay for itself with successes and will tempt businesses to come to the new, business-friendly Los Alamos when they have decided not to in the past.

So, those are my thoughts. I don’t know if the net effect of the County itself is anti-business. I hope not, and, certainly, there are many things its does and influences that are a positive. As with many things in life, I suspect there are things on both sides of the ledger and it always helps to examine the negatives and try to move them towards the positive end of the spectrum. We also have to always remember we live in a community purposely chosen for its remoteness.

I think it is important that we have a very strong commerce/business base in our community to help smooth out the bumps that come from Lab funding. We should remember, successful businesses can act as a positive feedback loop, they promote other successful businesses around them. Let’s try and make this happen.