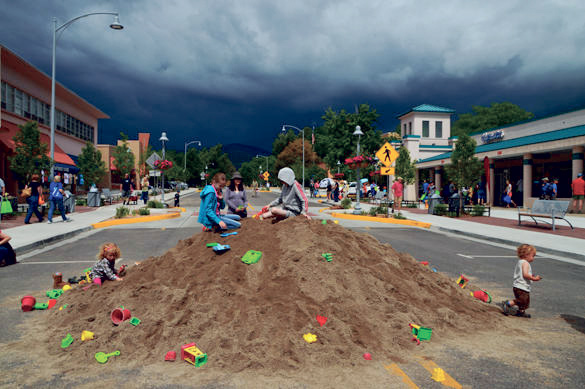 With dark skies looming on the horizon in 2014, children stay busy on the sand pile provided by Los Alamos National Bank, an annual sponsor of ChamberFest in downtown Los Alamos. Photo by Carol A. Clark/ladailypost.com

It was 1996, the Summer Olympics were in Atlanta, Ga., and Prince Charles and Pricess Diana had just announced they were getting a divorce. Windows NT 4.0 had just been released by Microsoft and the Nintendo 64 gaming console became available to consumers.

In Los Alamos, times were tough for the Chamber of Commerce. Located in a little back office behind Baskin Robbins, the Chamber was losing members and struggling to stay afloat financially. Chamber members such as Brownells’ Hallmark, Gordons, Thunderbird Shoes, and Allied Meats wanted the Chamber to do more to promote their businesses.

The Chamber had been holding a trade fair inside the gym at Cumbres Junior High, but attendance was poor. Chamber Board Member Roger Waterman had helped at the trade show by having his staff from Hilltop House Hotel cook hotdogs for everyone at the trade show.

“I didn’t want to participate as Hilltop House, but I did it to support the Chamber,” Waterman said.

“The trade fair at the gym didn’t really bring people downtown or generate excitement. The members felt like the Chamber wasn’t doing anything for them,” Havemann said.

So, she decided to create Summerfest. She convinced board members to believe in her vision, talked businesses into being sponsors, and hired an advertising company and graphic designer from Santa Fe to help brand the event.

“We had an awesome board of directors,”  she said. “The idea was to create a fun and exciting event. Get people of Los Alamos into Tiano Sports, Brownells’, Thunderbird Shoes, Don Taylor’s, CB FOX. Bring people down here with fun events that focused on kids.”

“It was kind of scary and it was hard to sell,” Havemann said. “It’s hard to articulate the benefits of the Chamber to the members.”

Don Taylor, who was on the board in 1996, remembers that first Summerfest was a really big deal. He hauled glass display cases from his store, which at that time was located where Subway is now, up onto Central Avenue in front of CB FOX so he could display his cameras.

“They were trying to expose the businesses more to the community and that was a good way to do it,” Taylor said. “I remember it was successful.”

Emily McGay, also a 1996 Chamber board member, recalls that the board decided to call the event Summerfest because it was in the Summer. The name was changed to ChamberFest a few years later when Los Alamos Commerce and Development Corporation took over operation of the Chamber.

“We had booths and activities,” McGay said. “People gave away things to the kids. It wasn’t anywhere near as big as it is today.”

Roger Waterman had a booth, not for Hilltop House, but to sell the first condos in Oppenheimer Place. He remembers that it rained because the rain ruined his watercolor painting marketing print.

Cheryl Sowder, owner of The Finishing Touch, was also on the 1996 board. “It was a big deal and it was really well attended,” she said of the first Summerfest. “The Chamber was struggling then, but we had more businesses in town and people were more excited about them.”

A few years later, LACDC took over operation of the Chamber, and Summerfest became ChamberFest.

Not long after that, a truck backed up and dumped a load of sand in the middle of Central Avenue and a tradition was born. The kid’s sandpile. At first, LA Transit Mix sponsored the sand pile at ChamberFest but eventually Los Alamos National Bank took over the sponsorship.

At the 10th anniversary of ChamberFest in 2006, the event had grown to include a car show and booths along both sides of Central. Registration was $250 for non-Chamber members, $100 for Chamber members and $50 for nonprofits.

Today, the 20th anniversary of Chamberfest is marked with 68 booths along both sides of Central Avenue and both sides of Main Street as well as around Central Park Square Park and surrounding the Chamber of Commerce parking lot, which is filled with a live band and a four-wheel-drive show.

Registration is limited exclusively to Chamber members and the fee is only $50 for businesses and $25 for nonprofits.

“I love it when you do something, you start it and it just lasts, and it becomes part of a tradition that just lasts,” Havemann said.