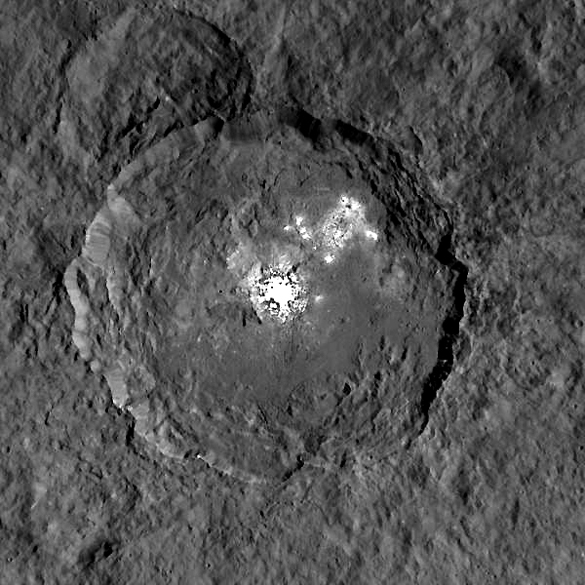 This image, made using images taken by NASA’s Dawn spacecraft, shows Occator crater on Ceres, home to a collection of intriguing bright spots. The bright spots are much brighter than the rest of Ceres’ surface, and tend to appear overexposed in most images. This view is a composite of two images of Occator: one using a short exposure that captures the detail in the bright spots, and one where the background surface is captured at normal exposure. The images were obtained by Dawn during the mission’s High Altitude Mapping Orbit (HAMO) phase, from which the spacecraft imaged the surface at a resolution of about 450 feet (140 meters) per pixel.  Courtesy/NASA/JPL-Caltech/UCLA/MPS/DLR/IDA

Ceres has more than 130 bright areas, and most of them are associated with impact craters. Observations from Dawn’s Framing Camera suggest the occurrence of salts originating from Ceres’ interior. These salts are consistent with a type called magnesium sulfate.

“We reviewed three possible analogs for the bright spots (ice, clays and salts),” said Le Corre, a PSI Research Scientist. “Salts seem to fit the bill and are the best possible explanation of what we see on the surface of Ceres.”

Le Corre and colleagues, using images from Dawn’s framing camera, suggest that these salt-rich areas were left behind when water-ice sublimated in the past. Impacts from asteroids would have unearthed the mixture of ice and salt.

“The location of some bright spots also coincide with places where water vapor was detected by other spacecraft,” said Reddy, a PSI Research Scientist. “This gives us confidence that the bright spots are likely salt deposits left over by sublimating salty water.”

Visit www.psi.edu/news/bright to see an image of bright spots on Ceres.

Dawn is continuing to descend toward its final orbit at Ceres, which will be around 240 miles (385 kilometers) from the surface of Ceres. In mid-December, Dawn will begin taking observations from this orbit, including images at a resolution of 120 feet (35 meters) per pixel, gamma ray and neutron spectra, and high-resolution gravity data.

PSI manages the Gamma Ray and Neutron Detector (GRaND) under the leadership of Tom Prettyman.

The PSI contribution to this project was funded by a contract from the University of California, Los Angeles, which leads the Dawn mission under the auspices of the NASA Discovery Program.