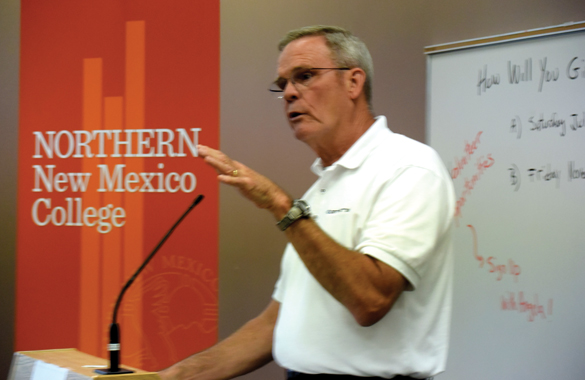 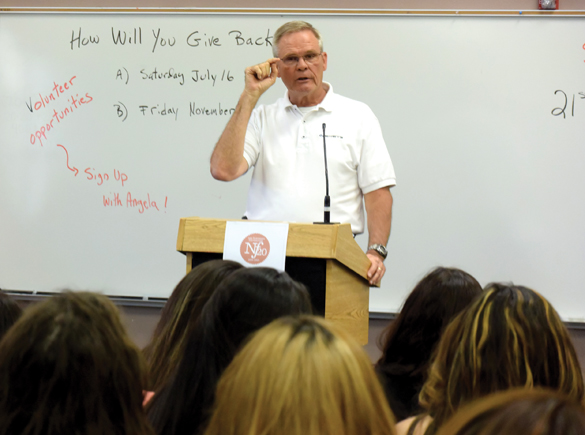 During his talk, Centerra’s Ted Spain encourages students to make a positive difference in the world, give back and help those who are coming behind them. Photo by Robert Naranjo/vdp.com 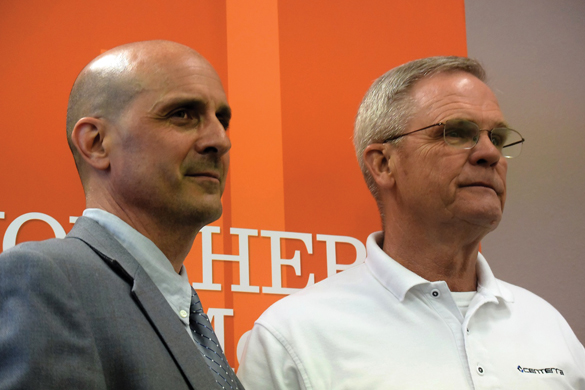 ‘Leave A Place Better Than When You Got There.’ –Ted Spain

ESPAÑOLA – Retired Army Col. Ted Spain was the guest speaker at the 2016 Foundation Scholarship Recipient Cohort Gathering June 30 at Northern New Mexico College in Española.
The purpose of the Cohort Gathering was to brief students on the steps to get their scholarship letters and other paperwork squared away with donors in a timely fashion to get the ball rolling to access the scholarship funding, and of course, to listen to Spain.
Spain is the co-author of a book, Breaking Iraq: The Ten Mistakes That Broke Iraq, and now a senior vice president with Centerra, LLC, and general manager of the protective force contract at Los Alamos National Laboratory.
He advised the Foundation scholarship recipients that where ever they end up in their careers, “…to leave it a place better than when you got there.” He added that they should also “challenge themselves to make a difference.” Spain also said that they should surround themselves with the best people possible because by doing that “…they can pick future leaders.”
Part of his sage advice to the Northern Foundation scholarship recipients was to, “help people around you, i.e., parents, teachers, brothers, sisters …”
He touched on his experience in Iraq and lessons learned there, using the time-honored adage to drive home his point, “Hindsight is 20/20.” The conflict between the different groups of Iraqis goes back centuries, and is religious in nature, with each group thinking they are right. With the invasion of Iraq by the U.S., we got caught up in it, he said.
And he mentioned his role at Los Alamos National Laboratory.
“Where everyone knows you and what you do,” he said, “from the guards at the gate, to other employees at the Lab, and even the car you drive is recognized.” He said his wife told him to “change the license plate on the front bumper of his car.” He told her it would do no good as they would still recognize him. Spain said he loves his work at LANL, all the employees, and also to be closer to his family, which he said is priceless. Military careers can be hard on the family, especially school-aged sons or daughters, he explained.
The former Colonel’s service includes, Chief, Force Protection Division, US Army Europe, Heidelberg, Germany; Commander, 18th Military Police Brigade, in both Mannheim, Germany and Iraq, during the ground war and first year of Operation Iraqi Freedom. 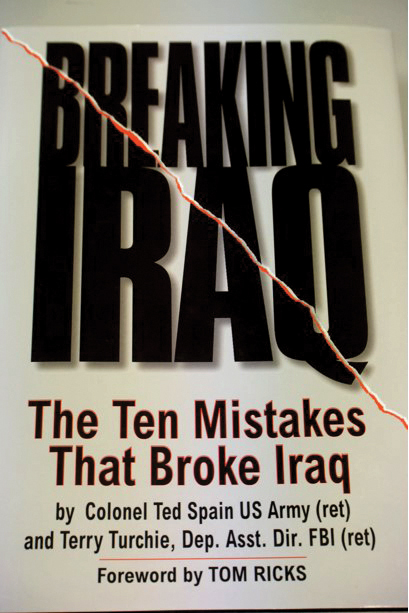 Book by retired Army Col. Ted Spain. Courtesy image
Following his talk, Northern’s Foundation Executive Director Terry Mulert briefed the students on how to process their scholarships after which Spain joined the ranks of the students and sat with them for awhile.
After the students left the room, Spain spoke about his service in Iraq. He said he survived two suicide bomber attempts on his life in Iraq, by sheer luck, having been delayed by 10 minutes at the location he was at prior to the attempt on his life. The other attempt failed as the suicide bombers bomb failed to explode.
He also was visibly disappointed and saddened to remember that the Iraqi Chief of Police he trained and left in place was assassinated soon after U.S. Forces left Iraq.
Interestingly enough, Spain said that the core of terrorists known today as ISIS, are comprised, to a large extent, of Saddam Hussein’s former ruthless military leaders, known then as the Republican Guard, whom U.S. Intelligence speculates escaped the advancing U.S. Army by simply removing any clothing, insignias, or identification and “blended into the public,” Spain explained. Later, after the U.S. was out Iraq, they resurfaced later as a world terrorist threat known as ISIS, he added. Spain said that it was difficult for U.S. Intelligence “to get anything information at all out of the Iraqi people,” because they knew if they said anything, their families would be cruelly tortured and put to death.
Spain spoke of an elder Iraqi man, about 70 years old, who told then Colonel Spain, in perfect English, “You Americans treat us too nice,” and the man added that the U.S. Army did “not use force” in dealing with Iraqis. Apparently, Iraqis took kindness for weakness. And, that mentality is a direct result of having a cruel, despotic leader like Saddam Hussein for so many years. The Iraqis knew nothing else but “force”, which is to say cruelty.
Asked about the infamous WMD’s, (Weapons of Mass Destruction) that former President George W. Bush said were the main factor in the U.S. Invasion of Iraq, Spain said that while the WMD’s were a little overstated, many mobile WMD’s were moved out of Iraq and into neighboring countries but there were WMD’s and they could have been launched.
He said Saddams’ critical error was his miscalculation that the U.S. would not take Iraq’s capitol, Baghdad, as it was left alone in the prior Operation Desert Storm, but in Operation Iraqi Freedom, it was taken militarily and ultimately Saddam was caught, turned over to Iraqis, and was hanged in the very same site, using the same gallows, where he or his sons had ordered others hanged.

Spain will be a special guest at Northern Foundation’s Gala slated for Nov. 4 at the Ohkay Casino Resort Hotel and Convention Center, Mulert said.