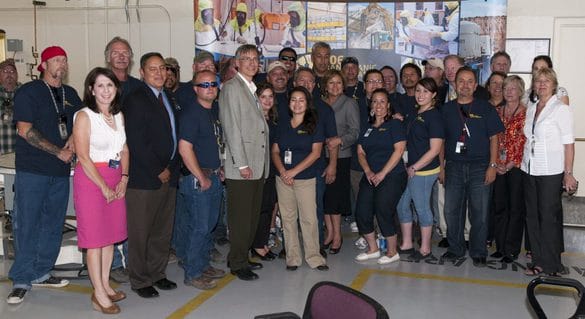 Employees of the Transuranic (TRU) Waste processing facility are joined by local and state officials to celebrate the 1,000th (1,014th) shipment of TRU waste to WIPP. Photo by Greg Kendall/ladailypost.com

New Mexico’s governor and other dignitaries gathered at Los Alamos National Laboratory Tuesday for a special event marking the 1,000th shipment of nuclear waste to a permanent repository at the Waste Isolation Pilot Plant (WIPP) near Carlsbad.

“I am pleased we continue to make progress on our environmental cleanup commitment to protect this beautiful place where we live together,” LANL Director Charlie McMillan told the crowd assembled at the Radioassay and Nondestructive Testing Facility.

The removal of transuranic waste stored above ground at LANL is a top environmental priority for the Laboratory and the State of New Mexico.

On Tuesday, McMillan explained that the team was ahead of schedule and the shipment the officials would witness as part of the day’s event was actually shipment number “1,014.”

Los Alamos County Council Chair Sharon Stover told the Los Alamos Daily Post, “This is a historic event. We are impressed with the team work from all these agencies and the team work with Charlie (McMillan.) Under the previous administration, all the Lab was doing was just getting fine after fine. We have a new administration that is saying, how do we work together and how do we get this off the Hill. So, we are really pleased with the leadership.”

Pueblo de San Ildefonso Gov. Terry Aguilar was at LANL 13 years ago on March 25, 1999 when the first waste was shipped.

He said that he was governor at that time and was “very critical of the shipments.”

Aguilar emphasized the current teamwork between LANL, Los Alamos County, the State and the Pueblo.

“Standing here talking about this unique event, it is something the Pueblo cherishes,” he said.

Aguilar thanked the many workers and contractors gathered for the celebration. “We never really say thank you to those individuals who do the work. This is very important.”

Stover publically thanked Gov. Martinez saying, “We value the key role that Gov. Susana Martinez played and that the environmental issues during and after the fire (Los Conchas Fire) remain a priority.”

NNSA’s Los Alamos Site Office Manager Kevin Smith joined others in recognizing those involved in the cleanup effort saying, “this really is a special day and took an awful lot of people to make this a reality.”

Smith talked of meeting Martinez a year ago on the “first desperate night of the Las Conchas Fire.” He thanked her for personally recognizing the need to take charge and tackle the important risk of the above ground waste first.

“I can assure you that NNSA is committed to clean up the legacy waste of the Manhattan Project,” Smith told the governor.

An agreement was reached that outlined the framework for the consent order to accelerate the shipments of transuranic waste to WIPP.

Smith said that the program at LANL is a sustainable, long term plan that will be a model in any state and for any location.

The governor thanked those gathered Tuesday for, “marking this significant milestone of cleanup of defense generated nuclear waste here in New Mexico. She congratulated LANL for achieving “1,014 shipments of TRU waste.” She said she was “excited to be ahead of what we were expecting today.”

“New Mexico is proud of the Lab’s remarkable history. We look forward to many great advancements and discoveries the Lab will provide over the next century,” Martinez said.

In New Mexico, Sandia and Los Alamos were the two legacy waste cleanup sites. In May, Sandia made its final shipment to the WIPP.

Tuesday marked the one-year anniversary of the Los Conchas Fire and applause erupted from the crowd when the governor reminded everyone to take a moment and thank all of the firefighters. “When you see a firefighter, please turn and thank them … we are extremely grateful for what you did.”

Martinez recalled that during the Las Conchas Fire, 1,000 barrels of legacy waste was sitting above ground at Los Alamos. The potentially threatening waste dates back to the 1940’s and the development of the atomic bomb. She said this was and still is “completely unacceptable.”

Martinez has made the disposal of above ground legacy waste a priority.  “I am committed to eliminating this risk once and for all,” she promised.

The governor congratulated all involved for a record number of shipments since the framework agreement was put into place last December.

The agreement calls for 3,706 cubic meters of above ground TRU waste to be removed by June 2014.

The Lab assured the Governor that it was on track to meet this deadline.

McMillan closed Tuesday’s ceremony saying, “I think it is time to ship some waste.”

To see more photos from the event click HERE.