CNN Heroes is a Peabody and Emmy Award-winning program that honors individuals who make extraordinary contributions to humanitarian aid and make a difference in their communities. During its 13 years, CNN Heroes has received more than 85,000 nominations from more than 100 countries and has profiled more than 300 CNN Heroes working in more than 80 countries around the world.

Montoya was chosen from among 1,500 nominees worldwide for the contributions he and Moving Arts Española have made to the children of Española Valley. Through a three-step winnowing process, producers selected just 24 nominees to profile weekly on CNN and CNN.com. In October, executives from Time Warner and Subaru will gather in New York City to select 10 finalists to compete to be this year’s CNN Hero.

“‘When I was very young, my heroes wore capes and they flew through the air and they lifted entire buildings with one arm. It was spectacular and it got a lot of attention. But as I grew older, my heroes changed. And so now I can definitely say that anyone who does anything to help a child is a hero.”

“If we use that definition as a litmus test, then Roger Montoya is not just a hero, he’s a giant among heroes,” Bailey said.

Christian Madrid, a young man who now sits on Moving Arts Advisory Board, was one of the children impacted by Montoya and his partner, Executive/School Director & Co-Founder Salvador Ruiz-Esquivel.

“I’m really grateful to Roger and Sal for giving me the support I needed to feel safe, feel loved, which is what we give to all the kids who walk through our door,” Madrid said. “We help them figure out what they’re passionate about, find themselves and then pursue that, and in essence just be happy.”

When CNN called Montoya to tell him he had been selected as a CNN Hero, “I was speechless and kind of scared. I didn’t think I was hearing the woman right on the phone. I kept asking her if she was for real. And then I was immediately excited about our community, and the implications for a region like Española and Rio Arriba, with all of our perceived problems and real problems. And, more importantly, the gifts that we have in this community that have raised our kids up and through are just beautiful. And Moving Arts has been that.”

CNN produced three videos about Moving Arts, which can be viewed at Montoya’s CNN Hero page, Extra Video: A Mosaic of Dance, Video Extra: Pueblo Ballerina. A version of Montoya’s video also was produced with a Spanish translation. It is unusual for CNN to produce more than two videos on their heroes.

“They did an impeccable job of research, and with such sensitivity and grace crafted these many movies, that when Sal and I saw them, we just wept, because they were poetic, they were authentic and they told our story with such grace,” Montoya said.

“’Courage to change the things that can be changed’ Roger has that in spades, and his partner as well and his team, they’re so courageous in their attempts…

“’And the wisdom to know the difference.’ I don’t see that quality, Roger. You see things that are wrong in the world and you don’t understand you can’t fix them all. You actually think that they just can’t stand. We have to make change. You can’t accept anything that is unacceptable.”

Madrid spoke about Montoya’s impact on those around him.

“I observe that you don’t try to change it by yourself. You organize. You get us involved. You bring everybody together to address the issue… Roger, I think as much as you’ve accomplished, one of your biggest accomplishments is in inspiring each and every one of us to up our game. And if we can do that, we can accomplish anything,” Madrid said.

Madrid urged others to emulate Montoya in order to create change in the community.

“It takes more than leadership. It takes every individual, each and every one of us to make that difference,” Madrid said. “We have to reach down inside and pull out our inner Roger and be a little bit less serene, a little more courageous and a little less wise. It’s going to take all of those coming together.”

“As we ran (for election), Roger would tell us to be the light, to shine out in the darkness, to continue to shine because good things would come,” Jaramillo said. “But I think of it more as if we’re a solar panel, with Roger as the sun that would fill us up with that sunlight. He truly invigorated all of us. He continues to invigorate this community.

“Roger is one of the heroes of the valley, and the people he has an impact on will become adults who will continue to have impacts on this valley. We are only able to do it, Roger, because of people like you.”

The power and resilience of the Española Valley was a theme throughout the evening.

“The story of Moving Arts is the story of a community with such resilience in our DNA and in our bloodline,” Montoya said. “It’s a powerful place. the land that we stand on graceful, and the work that we do is really based in those traditions of community.”

“When I look at what has been achieved here, he has lifted up what he sees here, the beauty and the potential and the unique culture, and he has become a conduit for that voice. And in a state that struggles so much, that is used to being last in so many things, our culture is strong, our heritage is strong. And it is through that that we rise above challenges, for generations now, in the past and in the future. And in my mind, that is what makes Roger a true hero.”

Montoya and Ruiz-Esquivel stressed the contributions other people and organizations are making to uplift children and the community, honoring more than a dozen during the presentation.

“We’re all doing our own work, but it’s to lift up and crosspollinate kids and share,” Montoya said. “It’s just a beautiful community, the number of nonprofits especially. It’s just remarkable.”

The Pueblo of Ohkay Owingeh was among those Montoya thanked.

“The land we’re standing on is Pueblo Land. We owe a debt of gratitude to the Ohkay Owingeh community for allowing us to imagine this space in the way that it is,” Montoya said.

Montoya has been moved by calls he has received since the Moving Arts videos aired, not only from around the U.S. but from places like Austria, Chile, Shanghai and London.

“It’s really heartwarming, because the message is, we need this everywhere,” Montoya said. “We resonate with your story. The notion of coming through disease into service is a beautiful motto.”

During the ceremony, Montoya emphasized that Moving Arts’ success is due to the efforts and support of many people, including Ruiz-Esquivel, the Pueblo of Ohkay Owingeh, elected officials and the community at large. He sees the recognition he has received as a recognition of everyone who has helped Moving Arts succeed.

“I think the idea of going from me as hero to we as heroes is such a brilliant and authentic notion, that we are only reflections of each other, and our children are the most precious investment that we can make,” Montoya said. “To hold a child, to teach a child, to see them find some sense of themselves is really the reason that I live.” 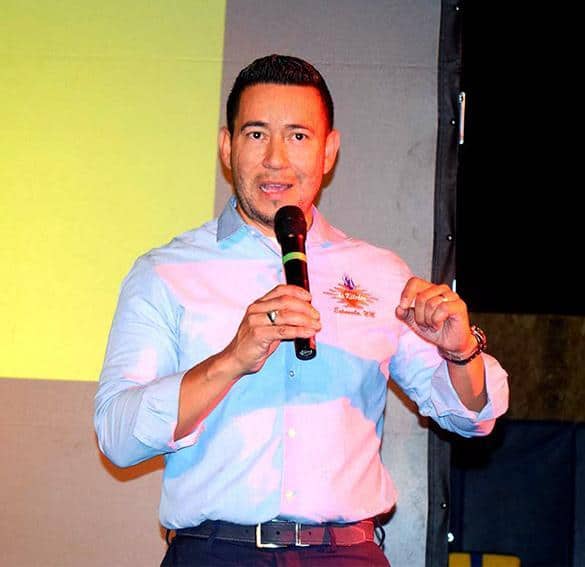 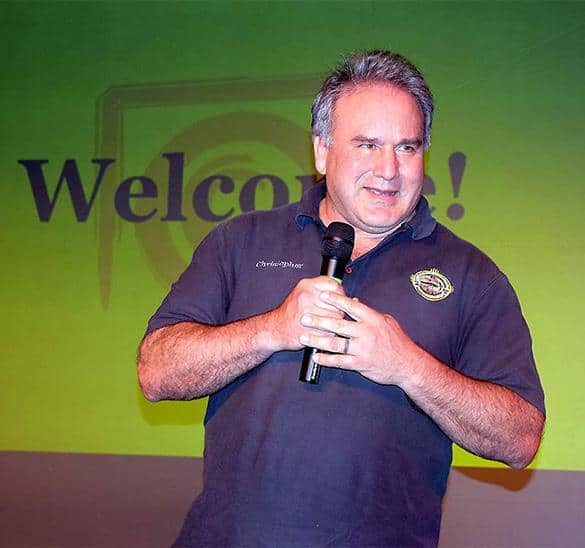 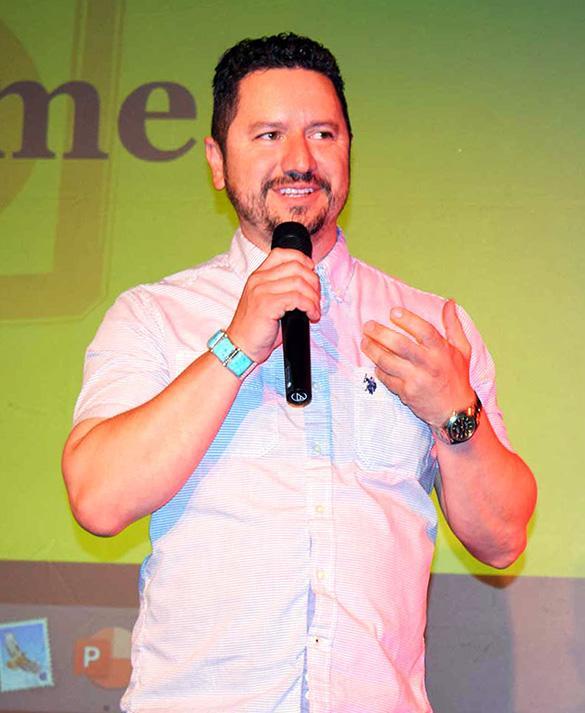 ‘I just want to tell you that you are someone I’ve always looked up to as a mentor. I’ve always admired your energy,’ Rep. Joseph Sanchez (D-Dist. 40) said. ‘I just want you to know that you’re someone I look up to and I really admire what you’ve done for this valley. You mean so much to the youth of the valley, to the kids. You give them hope.’ Photo by Arin McKenna/Valley Daily Post 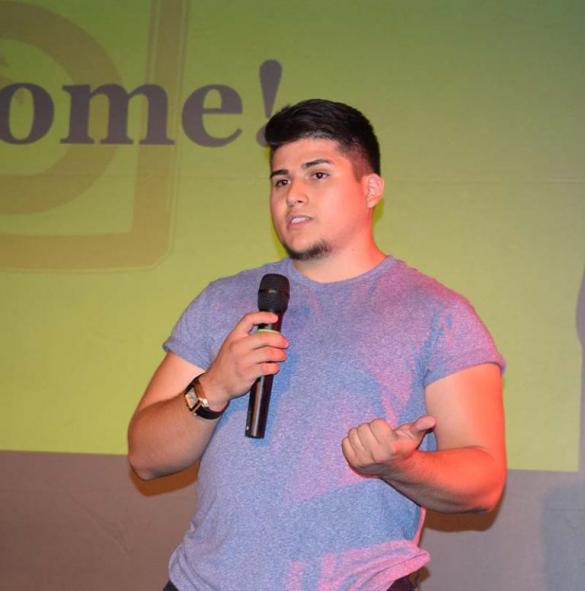 Christian Madrid is one of many youths whom Roger Montoya and Salvador Ruiz have helped over the years. Photo by Arin McKenna/Valley Daily Post 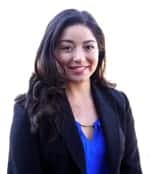 ‘Roger, you are a force, you are so incredibly magical, and you are my inspiration personally, for the things that you do and your dedication, and you always will be in our hearts, the people who are here. We support you. We stand on your shoulders and you can stand on ours,’ Rep. Andrea Romero (D-Dist. 46). Photo by Arin McKenna/Valley Daily Post 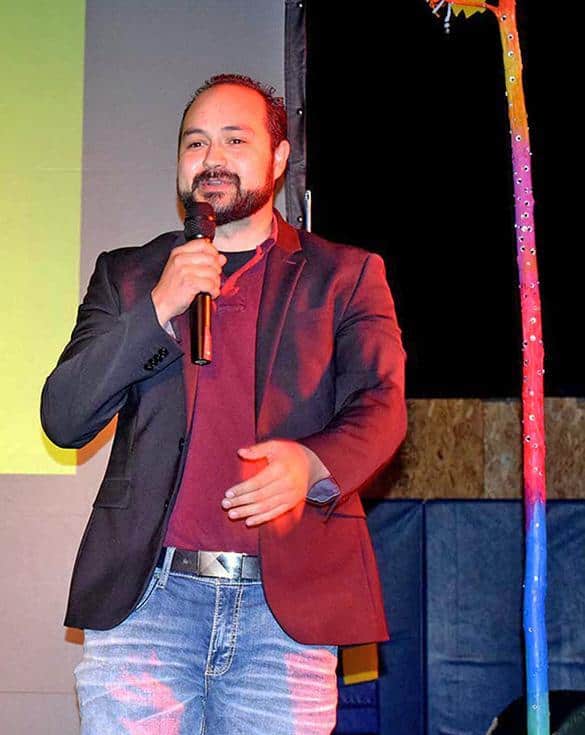 ‘You all have done such an incredible job of influencing and impacting our youth in the valley and across Rio Arriba, and moving across the state and across the nation with the recognition of CNN, which is amazing,’ said Eric Chavez, representing U.S. House of Representatives Assistant Speaker Ben Ray Luján. ‘It shines a light here on Española, where we’ve been impacted by severe things such as substance abuse. You are working on to combat that. To impact our youth is vital. To address these things such as trauma, generational abuse, generational trauma – you are one who is at the forefront of that.’ Photo by Arin McKenna/Valley Daily Post 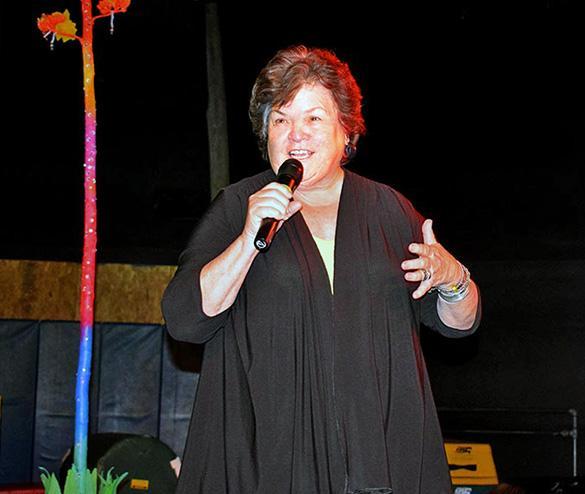 ‘People say, I think there’s a renaissance in this valley,’ Rep. Susan Herrera (D-Dist. 41) said. ‘And Roger and Salvador were early, early movers of this movement. And I think we’re building on their really deep work in this valley.’ Photo by Arin McKenna/Valley Daily Post 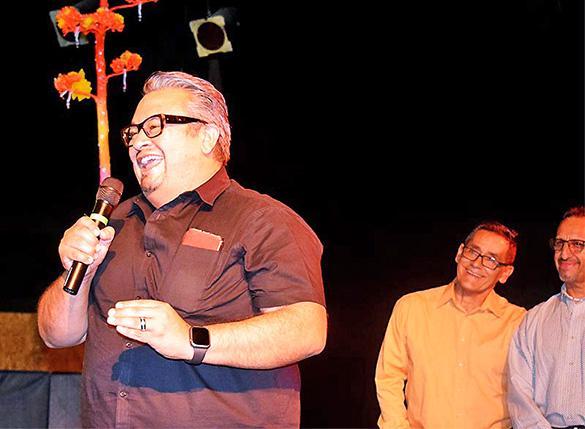 A scene from the celebration of Roger Montoya’s nomination as a CNN Hero. Photo by Arin McKenna/Valley Daily Post