Celebrating Feast Of The Virgin Of Guadalupe 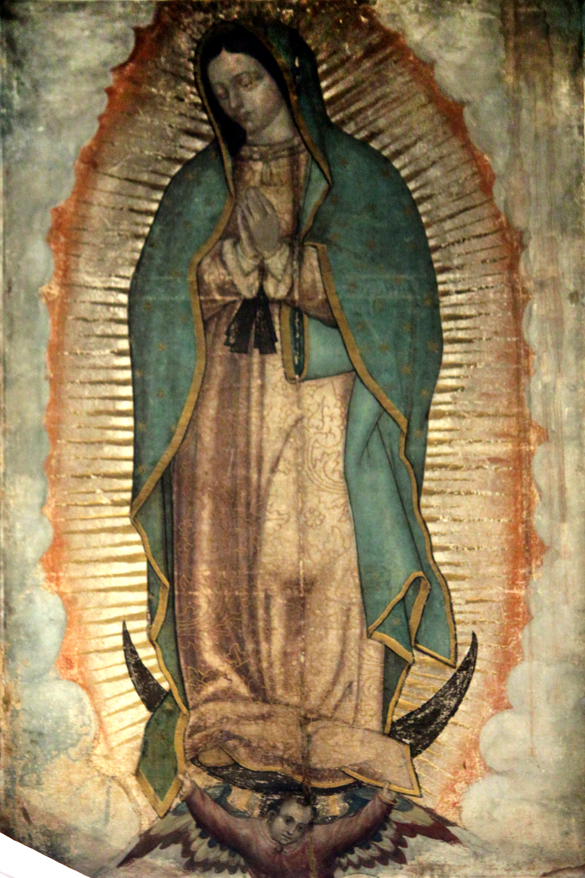 Today marks the Feast of the Virgin of Guadalupe, also known as Our Lady of Guadalupe. Since Dec. 12, 1531, the Virgin has become the patron saint of the Mexican Republic. Historically and emotionally, the Virgin is deeply woven into the life of most every Mexican.

During the wars of independence she was the patroness of the Mexican armies. Almost every Mexican town has a church dedicated to Our Lady of Guadalupe. And people turn to her for help and guidance on every occasion.

The festival of Nuestra Senora de Guadalupe actually begins a week before Dec. 12. Thousands of pilgrims from all over the country—many traveling for a week on foot or by burro—flock to the Basilica of Ville Madero, on the outskirts of Mexico City, where the most impressive ceremonies in honor of the Virgin are held. The streets adjoining the church are literally packed with people who wait their turn to enter the church and make their offering.

The climax of the festival begins on the eve of Dec. 12, when the conchero dancers gather in the atrium of the church. The name probably derives from the word concha, meaning “shell,” because the mandolin-shaped instruments of the dancers are made of armadillo shells The dancing—hopping steps performed to the endlessly repeated accompaniment of one or two musical themes—begins at midnight and lasts throughout the day. Groups of dancers alternate to keep up the furious pace.

The songs and dances of the concheros, who perform at fiestas all over Mexico, have been handed down through many generations and follow rigid traditional patterns.

Since it is a happy day for all Mexicans, food and drink are enjoyed by rich and poor alike, and many people will save up their money throughout the year for this special occasion.

Official Catholic accounts state that the Virgin Mary appeared four times before Juan Diego and one more before Juan Diego’s uncle. According to these accounts the first apparition occurred on the morning of Dec. 9, 1531, when a native Mexican peasant named Juan Diego saw a vision of a maiden at a place called the Hill of Tepeyac, which would become part of Villa de Guadalupe, a suburb of Mexico City. Speaking to him in his native Nahuatl language (the language of the Aztec empire), the maiden identified herself as the Virgin Mary, “mother of the very true deity” and asked for a church to be built at that site in her honor.

From her words, Juan Diego then sought out the archbishop of Mexico City, Fray Juan de Zumárraga, to tell him what had happened. As the bishop did not accept the idea, on the same day, Juan Diego saw the Virgin Mary for second time (second apparition) and she asked him to keep insisting.

Sunday, Dec. 10, Juan Diego talked to archbishop for second time and he instructed him to return to Tepeyac Hill, and ask the lady for a miraculous sign to prove her identity. That same day the third apparition occurred in which Juan Diego returned immediately to Tepeyac and, encountering the Virgin Mary reported the bishop’s request for a sign; she condescended to provide one on the following day (Dec. 11).

In order to avoid being delayed by the Virgin and embarrassed at having failed to meet her on the Monday as agreed, Juan Diego chose another route around the hill, but the Virgin intercepted him and asked where he was going (fourth apparition); Juan Diego explained what had happened and the Virgin gently chided him for not having had recourse to her. In the words which have become the most famous phrase of the Guadalupe event and are inscribed over the main entrance to the Basilica of Guadalupe, she asked: “No estoy yo aqui que soy tu madre?” (Am I not here, I who am your mother?).

She assured him that Juan Bernardino had now recovered and she told him to gather flowers from the top of Tepeyac Hill, which was normally barren, especially in December. Juan followed her instructions and he found Castilian roses, not native to Mexico, blooming there. Juan arranged the flowers in his tilma , or cloak, and when Juan Diego opened his cloak before archbishop Zumárraga Dec. 12, the flowers fell to the floor, and on the fabric was the image of the Virgin of Guadalupe.

The next day, Dec. 13, Juan Diego found his uncle fully recovered, as the Virgin had assured him, and Juan Bernardino recounted that he too had seen her, at his bed-side (fifth apparition); that she had instructed him to inform the bishop of this apparition and of his miraculous cure; and that she had told him she desired to be known under the title of Guadalupe.

The bishop kept Juan Diego’s mantle first in his private chapel and then in the church on public display where it attracted great attention. Dec. 26, 1531 a procession formed for taking the miraculous image back to Tepeyac where it was installed in a small hastily erected chapel. In course of this procession, the first miracle was allegedly performed when an Indian was mortally wounded in the neck by an arrow shot by accident during some stylized martial displays executed in honour of the Virgin. In great distress, the Indians carried him before the Virgin’s image and pleaded for his life. Upon the arrow being withdrawn, the victim made a full and immediate recovery.

Juan Diego’s tilma has become Mexico’s most popular religious and cultural symbol, and has received widespread ecclesiastical and popular support. In the 19th century it became the rallying call of American-born Spaniards in New Spain, who saw the story of the apparition as legitimizing their own Mexican origin and infusing it with an almost messianic sense of mission and identity – thus also legitimizing their armed rebellion against Spain.

Historically the devotion to Our Lady of Guadalupe did not lack clerical opponents within Mexico, especially in the early years, and in more recent times some Catholic scholars, and even a former abbot of the basilica, Monsignor Guillermo Schulenburg, have openly doubted the historical existence of Juan Diego. Nonetheless, Juan Diego was canonized in 2002, under the name Saint Juan Diego Cuauhtlatoatzin.