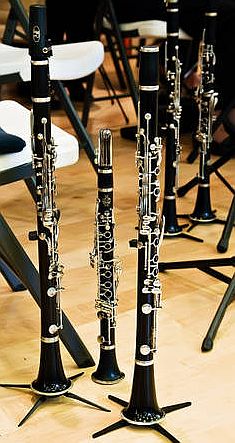 Celebrate Cinco de Mayo with the Los Alamos Community Winds and their special guests Los Niños de Santa Fe by attending “Cinco de May – Celebrating a Century of the Music and Dance of Mexico and New Mexico,” at 7 p.m., Saturday May 5, at Crossroads Bible Church.

“I saw Los Niños de Santa Fe perform at the Museum of International Folk Art and it was a wonderful experience,” Winds Director Ted Vives said. “This seemed like a perfect opportunity to do something together.”

The performance has been selected as an Official New Mexico Centennial Event.

“We want to celebrate our collective cultural ties with Mexico;” Vives said. “So much of New Mexico’s culture and heritage originated in Mexico.”

Los Niños de Santa Fe (LNSF) is a Santa Fe program dedicated to preserving traditional dances of Mexico. Students ranging from ages three to adult learn the fundamental techniques of traditional and modern movements, footwork and the history of other ethnic influences that has defined folkloric dance of Mexico.

Antonina Valdez Romp, Director and President of Los Niño’s de Santa Fe Y Companies is native of Santa Fe. She has been the Artistic Director of LNSF since 2005.

Before the dancing begins, the Winds will perform Zacatecas March by Genaro Codina, arranged by Andrew Glover. It is a traditional march based on Mexican folk melodies.Zacatecas is “a second Mexican national anthem,” Vives said.

“This was one of the first pieces of serious music written for concert band,” Vives said. “For 60 years, it’s been one of the most performed and most respected pieces in the literature. It will show what the musicians are capable of.”

The concert will also mark the announcement of the winner of The Music-Filled Life Scholarship.

A scholarship of $1,000 will be awarded to a senior home-schooled or Los Alamos High School music student who has been accepted into college.

The recipient won’t be required to major in music, but must have specific plans to further their musical education and make music a part of their life.

The student must play an instrument of the band — percussion, wind or brass.

“We’re so happy to be able to provide this scholarship,” Vives said. “One reason we exist is to show students that there are good quality ensembles to be involved with after school is over. We want to instill the love of music for their life. It’s wonderful that people of diverse backgrounds can come together to do something fun and artistic. We wanted to give something back to the student to foster that goal and their love of music.”

“I’ve always been impressed with the level of the performances students in Los Alamos are able to give,” Vives said. “It’s a tribute to the music education in schools and in the private sector. Los Alamos has long been a musical community. It helped to make life more normal.”

The Winds hope to increase the amount of the scholarship as donations are raised.

Fall will mark the 13th season for the Los Alamos Community Winds.

Their first concert of the season will be Oct. 20, when the Winds will premier a composition by Vives that he calls “a melding of technology and music.”

Before that, the Winds will give their annual Fourth of July performance in Overlook Park as well as performing at The Next Big Idea in September.

“It is the dedication of the group that allows for such a busy performance schedule,” Vives said. “I can’t ask for more.”