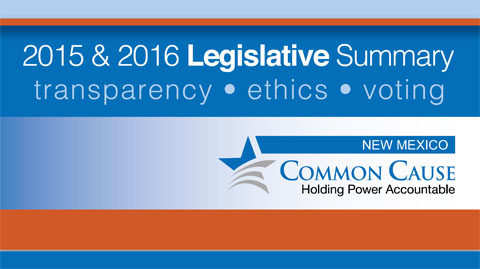 Common Cause New Mexico today unveiled its statewide Legislative Summary and Scorecard, recording the votes of legislators on its priority transparency, ethics and good government issues during the 2015 and 2016 sessions.

The scorecard reports the votes cast by legislators on a number of crucial bills on the floor of both chambers and in committees. It reflects the fate of the bills—passage, defeat, delay or death in committee.

“The report is in keeping with our pledge that everyone—legislators, lobbyists and advocates—needs to be held accountable for their actions, their votes, their contributions and expenditures,” CCNM Director Viki Harrison said.

“Everyone deserves to know how their legislator votes on issues affecting money in politics, and this report card is our first effort to record the votes of elected officials on these issues,” said Heather Ferguson, the group’s legislative director. “It will not be our last.” Ferguson said the report is an educational piece that does not advocate for the election or defeat of any legislator or candidate.

Votes highlighted in the 2015 session include HB 155, which tightened legislative reporting and passed; HB 278, which increased independent expenditure disclosure and failed; HB 151, which allowed 17-year olds to vote in primaries and failed; HB 241, which slowed the revolving door for legislators becoming lobbyists and failed, and SB 58, which brought the state’s public financing system into compliance with federal court decisions and failed.

The scorecard reflects the importance of committee action as well as floor votes.

Several of the bills tracked in 2016 never made it to the floor. HJR 5 establishing an independent ethics commission passed the House but was stopped in the Senate Rules Committee. HRJ 1 for an independent redistricting commission passed one House Committee but was never given a hearing in another. SB11, increasing transparency for dark money groups, passed the Senate for the fourth time but was not heard by House Committees.

Common Cause New Mexico’s Legislative Summary and Scorecard is available at http://www.commoncause.org/states/new-mexico/research-and-reports/2015-2016-legislative.pdf.