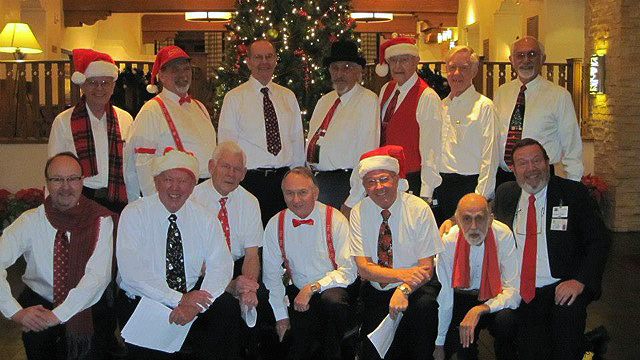 The Lads of Enchantment perform a Christmas Concert in Espanola. Courtesy photo

The Los Alamos Arts Council will present The Lads of Enchantment Chorus and The Hot Flashes Two Piano Quartet at the February Brown Bag concert.

The concert will begin at noon Wednesday, Feb. 6, in the Pajarito Room at Fuller Lodge. The Brown Bag Series is free and open to the public. 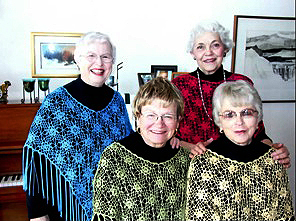 Jonathan Friedman directs the chorus.  He is new to the area, but he has been a member of the BHS for 35 years.

Friedman has the distinction of winning three gold medals as a bass singer in the Masters of Harmony Chorus (Santa Fe Springs, Calif.) that won the BHS International Chorus Competition in 2002, 2005 and 2008.

For those unfamiliar with the genre, barbershop harmony is a style of a cappella singing in which four singing parts seek to achieve a melodious ringing chord.

Barbershop was originally based on traditional songs, but over the years it has evolved. Today, any song that can be arranged in the four-part barbershop style may be sung, including jazz, Broadway music, blues, rock and roll and pop.

The Lads are pleased to be singing in the Brown Bag performing series. They will sing a variety of traditional barbershop songs and a few barbershop arrangements of songs that have been popular over a number of years.

William Gillock and Kevin Olson are contemporary American composers, best known for their extensive output of piano solos and duos.

The quartet is pleased that they have written some delightful two-piano eight-hand as well.

In 1997, Joann Brown was in a music store in California when she spotted a two-piano eight-hand arrangement of John Philip Sousa’s “Stars and Stripes Forever.”

She purchased the music, asked three friends to play it with her, and the Hot Flashes Two Piano Quartet was born.

The group’s recitals since then have included two benefit concerts, which helped fund the purchase of a new grand piano for the UNM-Los Alamos campus, and a performance for the State Conference of the Professional Music Teachers of New Mexico.