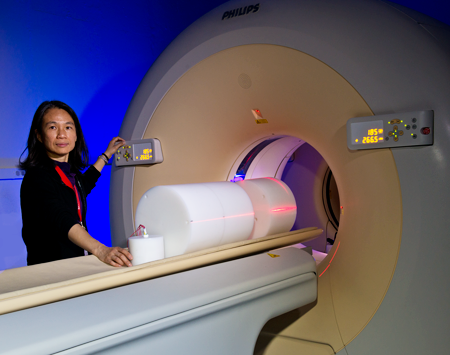 Heather Chen-Mayer at the PET/CT scanner with HDPE phantoms. The large sections are for whole-torso measurements; the small cylinder is one of two other sizes tested in the course of the project. Courtesy/NIST.

In the United States, about 80 million x-ray computed tomography (CT) scans are made every year – 7 million of them on children – according to the American Association of Physicists in Medicine (AAPM.)

Not surprisingly, there is intense interest in accurate determination of the radiation doses that patients receive from CT machines, and researchers are actively seeking improved measurement standards.

Now Heather Chen-Mayer and colleagues from the Radiation and Biomolecular Physics Division’s Radioactivity Group and Dosimetry Group have demonstrated that determining absorbed dose by measuring the temperature change it prompts in plastic phantoms (devices that serve as proxies for human tissue) is a valuable complement to the conventional method, and might eventually come to serve as a primary standard.

Currently, assessments of radiation dose in CT are based on a metric termed the computed tomography dose index (CTDI), introduced more than 30 years ago, evolved over the years under the AAPM guidance, and adopted by the Food and Drug Administration as a regulatory performance standard.

Using the CTDI metric for radiation dose in a CT exam requires performing a measurement using a 10 cm long ionization chamber placed at reference points within a standard cylindrical phantom made with polymethyl methacrylate (PMMA.)

X-rays ionize the gas molecules in the chambers, resulting in a build-up of opposite charges on two electrodes. The accumulated charge between the electrodes, which is proportional to the amount of radiation received, is converted into a calculated dose using the calibration coefficient previously obtained from in-air measurements (ultimately linked to the NIST air kerma* standard).

With the advent of modern CT – affording wider beam collimations and increasingly complex protocols – the various aspects of the CTDI paradigm are under increasing scrutiny. 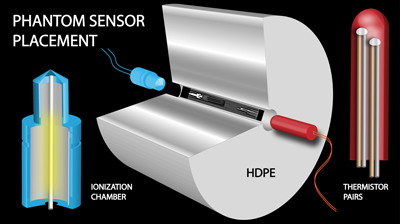 Schematic diagram of sensor placement in phantom. In the center channel is an actual x-ray image of an ionization chamber (left) and thermistors (right) within an HDPE phantom. Courtesy/NIST

“Many experts regard it as inadequate,” Chen-Mayer says. “It is not ideally suited to the helical scanning pattern in CT.”

AAPM task groups have been approaching the problem from two fronts: to alter the design of the phantom geometry and material and measurement practices to better represent the CT beam in real patient scans; and to make a distinction between the dose in a standard CTDI phantom and dose to patients of various sizes and shapes by demonstrating the dose dependence on the phantom size.

NIST fabricated a version of the newly proposed AAPM phantom with three sections of high-density polyethylene (HDPE) cylinders and participated in some of the measurements with ionization chambers to evaluate the various characteristics.

Sometime in February 2012, the team decided to try a more direct dose measurement method with which NIST has decades of experience – calorimetry – by measuring the tiny change in temperature that results as x-rays deposit energy in the phantom material.

Calorimetry is regarded as a “primary” reference absorbed dose standard for therapy-level radiation dosimetry. There are efforts in other national metrology laboratories to establish the same for medium-energy x-rays used in medical diagnostic imaging, which currently is referenced to air kerma in the US.

The team envisioned using such a primary method in a CT beam. “As far as we know, no one else is making these kinds of measurements in CT,” Chen-Mayer says.

The researchers embedded thermistors along with conventional ionization chambers into a smaller version of the HDPE phantom for testing.** Whereas PMMA has a density of about 1.2 g/cm3, the density of HDPE is 0.93 to 0.97 g/cm3, which more closely approaches that of water (nominally 1.0 g/cm3) — the widely accepted surrogate for human tissue. For a typical CT spectrum in a phantom with a diameter of 20 cm or greater, the dose in HDPE resembles the dose in water more closely. HDPE also has a lower thermal conductivity than water, which may enable longer measurement times.

There were initial concerns that the much lower dose of CT beams compared to therapy beams, for which calorimetry is typically used, would produce unacceptably low signal levels.

“We weren’t at all sure it would work,” Chen-Mayer says. “That’s why we tried it in a 6 MV medical linac beam first.” Such high-energy photon beams, with doses on the scale of a few grays (Gy, the SI unit for absorbed dose), are used for radiation therapy. “We figured that if it didn’t work there, it certainly wouldn’t work at diagnostic levels used in CT, which are typically at the milligray level.”

“That’s not much (of a temperature rise),” Chen-Mayer says, “but the corresponding radiation dose is sufficient to break DNA bonds.”

By contrast, a typical CT scan delivers a few seconds of exposure, resulting in a few mGy of dose and prompting temperature increases in the µK range in HDPE – rather close to the current detection threshold for calorimetry.

The test in the high-energy beam went well, and the results were consistent with simultaneous ionization chamber readings and with equivalent measurements from water calorimeters. So the team moved the phantom into PML’s newly acquired PET/CT machine.

To get a sizable initial signal, the team took readings from 20 consecutive 2.8 s axial scans, and was able to record the accumulated change in temperature rise, as well as the small temperature steps for each scan.

Of course, the observed temperature change has to be corrected for the thermal conductivity of the HDPE. That is fairly straightforward. Much less clear is how x-ray energy contributes to photolytic chemical reactions in the plastic.

“Those reactions can alter the temperature in various ways, producing a so-called heat defect,” says team member Ron Tosh. “The basic idea is that the temperature change you detect does not solely reflect heating by the radiation, but also chemical reactions which may be endothermic or exothermic. You have to correct for them. We see the same thing in water calorimetry, where the presence of dissolved gases gives rise to a heat defect.” 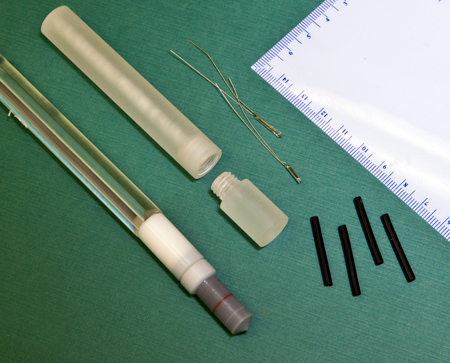 From bottom left: an ionization chamber in its casing, a polystyrene enclosure for thermistors (to be implemented), and two thermistors. The four black items at right below the centimeter rule are thermistor covers. Courtesy/NIST

The researchers believe that the heat defect in HDPE could affect the measured values by as much as 10 percent. They are continuing to study it, but are also now experimenting with embedding their thermistors within another plastic, polystyrene, which has a heat defect of zero.

“That way, the immediate surroundings of the thermistors will be free of heat defect,” Chen-Mayer says.

The outcome remains to be seen, and developing a standard calorimeter for the divergent, rotating fields employed in CT will take a great deal of work by many researchers.

But Chen-Mayer, Tosh and colleagues have firmly established the potential utility of calorimetry to the CT dosimetry community, and raised the possibility that it might become a primary standard in the future.

The National Institute of Standards and Technology (NIST) is an agency of the U.S. Department of Commerce.