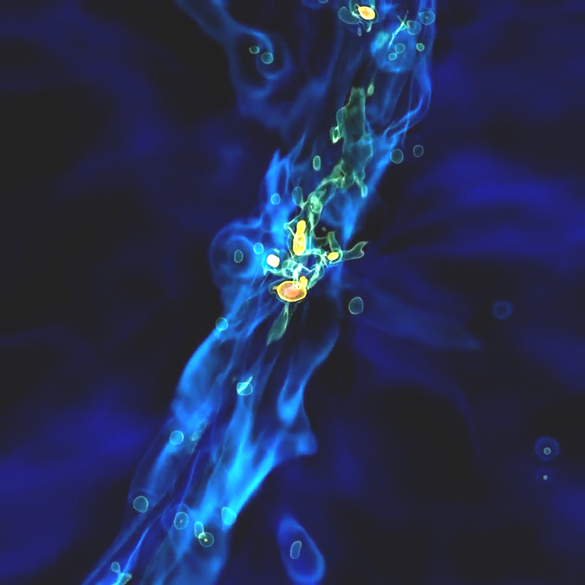 A new computer simulation helps explain the existence of puzzling supermassive black holes observed in the early universe. The simulation is based on a computer code used to understand the coupling of radiation and certain materials.

“Supermassive black holes have a speed limit that governs how fast and how large they can grow,” said Joseph Smidt of the Theoretical Design Division at Los Alamos National Laboratory, “The relatively recent discovery of supermassive black holes in the early development of the universe raised a fundamental question, how did they get so big so fast?”

Using computer codes developed at Los Alamos for modeling the interaction of matter and radiation related to the Lab’s stockpile stewardship mission, Smidt and colleagues created a simulation of collapsing stars that resulted in supermassive black holes forming in less time than expected, cosmologically speaking, in the first billion years of the universe.

A video about the discovery is available here (https://youtu.be/LD4xECbHx_I ).

It turns out the Los Alamos computer model not only confirms the possibility of speedy supermassive black hole formation, but also fits many other phenomena of black holes that are routinely observed by astrophysicists. The research shows that the simulated supermassive black holes are also interacting with galaxies in the same way that is observed in nature, including star formation rates, galaxy density profiles, and thermal and ionization rates in gasses.

“This was largely unexpected,” said Smidt.  “I thought this idea of growing a massive star in a special configuration and forming a black hole with the right kind of masses was something we could approximate, but to see the black hole inducing star formation and driving the dynamics in ways that we’ve observed in nature was really icing on the cake.”

A key mission area at Los Alamos National Laboratory is understanding how radiation interacts with certain materials. Because supermassive black holes produce huge quantities of hot radiation, their behavior helps test computer codes designed to model the coupling of radiation and matter. The codes are used, along with large- and small-scale experiments, to assure the safety, security, and effectiveness of the U.S. nuclear deterrent.

“We’ve gotten to a point at Los Alamos,” said Smidt, “with the computer codes we’re using, the physics understanding, and the supercomputing facilities, that we can do detailed calculations that replicate some of the forces driving the evolution of the Universe.”