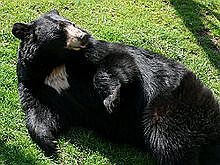 At approximately 4 a.m. today, a black bear swatted at a tent occupied by a sleeping juvenile who was camping with family at Ponderosa Campground.

The tent was torn, and the bear’s claws grazed the back of the juvenile’s neck, causing a minor abrasive injury.

Bandelier National Monument Superintendent Jason Lott announced that effective immediately, Ponderosa Group Campground will be closed for up to 10 days, pending capture and removal of the black bear.

“Although we do not believe that this was a predatory attack by the bear, whenever there is a human injury caused by wildlife, we take it seriously,” Lott said. “Bandelier natural resources staff and park rangers have worked closely with the New Mexico Department of Game and Fish to determine the proper course of action. In concordance with National Park Service policies and State Game and Fish policies, we have decided to remove the bear.”

Starting tonight, NPS Rangers will work with State Game and Fish personnel to trap and remove the bear.

As a result, Ponderosa Group Campground will be closed for up to 10 days.

Juniper Campground for families, located about six miles away, will remain open.

Bandelier National Monument is open from dawn to dusk, seven days per week.

Visitors should park in the designated lot in White Rock. The shuttle runs every 15-20 minutes from 9 a.m. to 5:30 p.m. and there is no additional charge for the shuttle.

Park entrance fees of $6 per adult or $12 for groups of two or more may be paid at the Bandelier Visitor Center upon arrival.