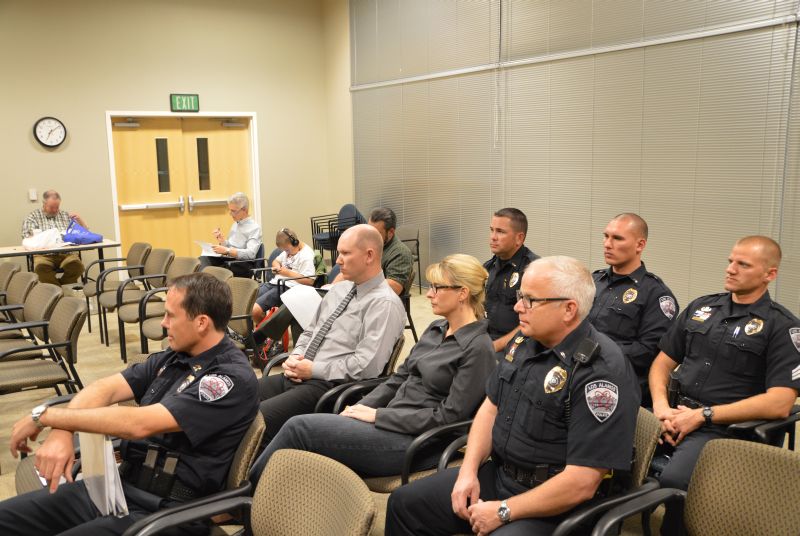 Los Alamos Det. Brian Schamber, center in gray shirt and tie, with his wife Zina Schamber and the senior command staff of the Los Alamos Police Department during a 2012 County Council meeting at the White Rock Fire Station in which police officials briefed council on the department’s master career plan. From left, former Commander Randy Foster who was recently terminated, Commander Scott Mills who is on leave, and back row from left, Commander Preston Ballew who is on medical leave, Commander Jason Wardlow Herrera and Det. Sgt. Oliver Morris. Police Chief Wayne Torpy, currently on sick leave, announced his retirement last month which is scheduled for early fall. Photo by Carol A. Clark/ladailypost.com

Attorney John Day filed a counter claim in United States First District Court for the District of New Mexico in Albuquerque Tuesday in response to Los Alamos County Council’s complaint, filed May 17 in the same court, for a declaratory judgment against a local police detective.

Day filed the counter claim on behalf of his clients Los Alamos Police Det. Brian Schamber as a counter-plaintiff / defendant and his wife Zina Schamber as plaintiff in the action.

The suit claims that Brian Schamber was the victim of civil rights violations and state tort violations while employed at LAPD. Schamber, who went to work at LAPD November 2010, was diagnosed with bipolar disorder on or about June 2012, according to court documents. He also was diagnosed with obsessive-compulsive disorder (OCD.)

In December 2012, Foster and Mills were involved in having Schamber evaluated at Los Alamos Medical Center and the New Mexico Behavioral Health Institute (“NMBHI”) in Las Vegas, N.M., where he was held against his will, according to the documents. LAPD Chief Wayne Torpy was on sick leave and court documents state that Foster, as acting chief at the time, was terminated and Mills received disciplinary action.

In response to a request for comment, Los Alamos County spokesperson Julie Habiger told the Los Alamos Daily Post this afternoon, “The County does not comment on pending litigation.”

Day issued the following statement today, “Brian Schamber is a dedicated Los Alamos police officer who was illegally and improperly committed to a psychiatric facility by his supervisors. At every step of the way, when Los Alamos county government had an opportunity to do the right thing for Brian and his family to atone for their illegal actions, the county government has chosen to do the opposite.”

Attorney Jamie Sullivan is representing the County in this matter and explained the County’s position during an interview today.

“We referred him for evaluation because he had been diagnosed with OCD and bipolar disorder and he had made some frightening comments to officers and we thought he should be evaluated,” Sullivan said. “All sides agree that since he has been cleared for duty and can carry a gun that he should come back to work.”

The difference in positions, Sullivan said, is that Schamber’s claim states that he was wrongfully committed – whereas the County’s position is that he was not committed but rather evaluated.

The Schambers are demanding a trial by jury for all issues so triable as well as judgment against the defendants as follows:

Check back at ladailypost.com for more on this developing story.