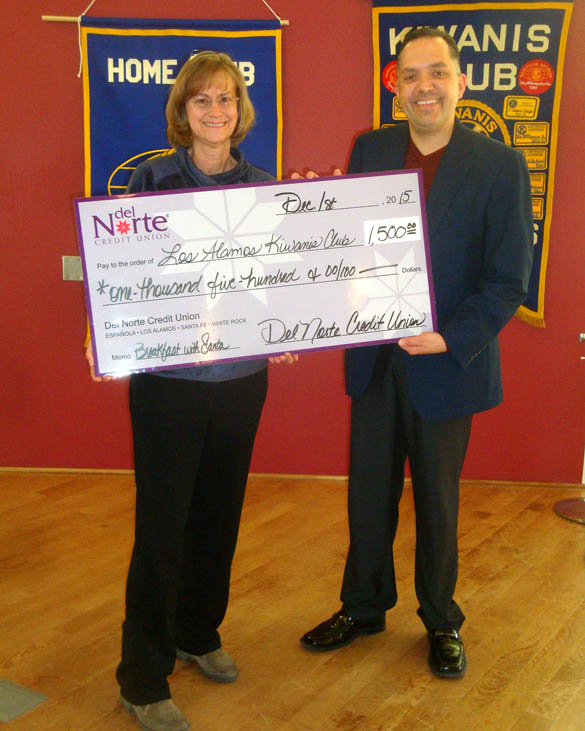 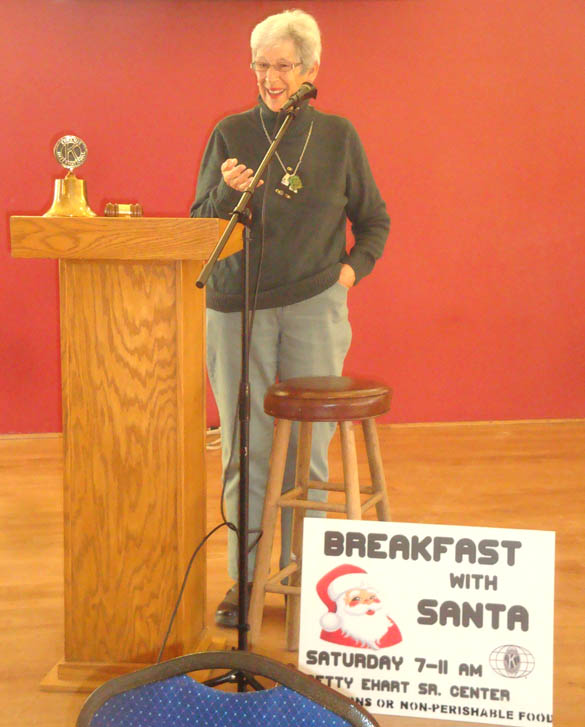 The Kiwanis Club of Los Alamos “Breakfast with Santa” Dec. 5 at the Betty Ehart Senior Center was a great success. Families poured through the breakfast line and just kept coming until Kiwanis ran out of pancakes, eggs and sausage.

Ann Hayes, a veteran of 10 or 11 past Breakfasts with Santa said that no such breakfast in recent years has drawn as many people as this year’s event. “There may be one in the past that was bigger,” she said—but only one.

Hayes said that her husband, Pat Soran, spoke later with Santa—who is a good friend of his—and Santa said that his conversations with Los Alamos children this year were “pretty standard.” The children brought him lists, catalogues, and letters explaining what they wanted for Christmas. He said one mother quietly pocketed her child’s letter to Santa so that she would have the proper model number for what he wanted.

Despite the deluge of customers, Kiwanis had no shortage of volunteers to handle the work. There were sign-up sheets for volunteers on the wall in the kitchen, and they drew signatures from 25 Kiwanis members, 28 Key Club members, and one Builders Club member who worked at the breakfast.

In an e-mail to Kiwanis members later, Hayes said, in part, “These events donot go smoothly unless we have lots of help on board, and I think we had a record number of Kiwanians and Key Clubbers … You all were wonderful, and everything went off without a hitch. My heartfelt thanks to all of you….”

The highly successful breakfast brought a fitting end to weeks of preparation. Just a few days before, on Dec. 1, Eric Baldonado, manager of branch operations for Del Norte Credit Union, had presented Lisa Wismer, president of Los Alamos Kiwanis, with a giant $1,500 check in support of Breakfast with Santa.

The gift brought huge smiles to the faces of many Kiwanis members—notably, John Arrowsmith, the LA Kiwanis overall chairman for pancake breakfasts, and Hayes, who chaired Breakfast with Santa with her husband, Pat Soran. Hayes is also the Kiwanis chairwoman for the Foster Children’s Christmas Party in Española.

Arrowsmith and Hayes were the formal noon speakers at Kiwanis Dec 1, and they explained how the breakfast helps two communities. They traced a little of the history of the event, noting the amount of work that always has to be done ahead of time and the need for many volunteers, and they explained how important Breakfast with Santa is in maintaining support for the Foster Children’s Chritmas Party.

They noted that people who attend Breakfast with Santa don’t have to purchase tickets for their food, but are asked, if possible, to donate money or non-perishable food items. In return, they get a solid meal, served by friendly Kiwanis volunteers at the Betty Ehart Senior Center, and their children have the opportunity to meet Santa, tell him what they want for Christmas, and get a photo taken with him.

Arrowsmith explained that the food collected at the breakfast goes to LA Cares to help those in need here at home. The money goes to help pay for the party in the Valley. Arrowsmith said the breakfast is a Kiwanis tradition; it has been conducted each December for about 30 years. Oldtimers might remember attending the breakfast when it was held at Montoya’s Restaurant, or, later, at Los Alamos High School.

Hayes noted that the party in Española (run in conjunction with the Children, Youth and Families Department and scheduled this year 5-7 p.m. Thursday, Dec. 17, at The Rock Christian Church in downtown Española) usually draws between 150 and 200 people. Los Alamos Kiwanis provides a significant amount of the food for the party, and many Kiwanis volunteers serve on the food line. In the past, Kiwanis has also given out duffel bags for the children and donated money to buy holiday groceries for families in need.

Donors in Española also provide abundant food and volunteer help. Los Alamos High School Key Club does face-painting and gingerbread-house construction with the children. And Santa attends the Española party, talks with the children, and has his photo taken with them—just as he does at the Los Alamos event.

Those who came to the breakfast Dec. 5 in Los Alamos not only got a good, free breakfast and an opportunity for their children to meet with Santa; they also helped Kiwanis provide foster children in the Valley with a brighter, more abundant Christmas.